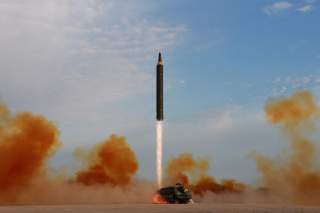 The North Korean regime seems to have been unusually quiet lately, as it has been more than two months since it reportedly detonated its first hydrogen bomb on September 3, in its sixth nuclear test this year.

But the rogue country’s capricious leader Kim Jong-un could resume his missile launches and nuclear buildup any day. Concerned nations should brace themselves before he sends another shockwave across the globe.

So, what’s next for Pyongyang after its astounding announcement that it has developed a miniaturized H-bomb prototype small enough to fit into the warheads of its indigenous intercontinental ballistic missiles (ICBMs)?

A close examination of Pyongyang’s defiant tests over the past years reveals that it wants everything, from solid-fuel-propelled short-to-medium-range missiles, ICBMs and atomic bombs all the way to H-bombs, and ultimately, thermonuclear weapons that can be fired with powerful rockets to hit targets in the contiguous United States.

The next step for the Kim regime is to test its ICBMs further, as the Hwasong-14 has only undergone one ballistic launch and is pending a full-scale, full-range test to ensure its reliability.

Step 2 is to develop multiple independently targetable re-entry vehicles with more than one warhead, each capable of being aimed to hit a different target.

If that is the case, then Tokyo can expect more North Korean missiles piercing its airspace and hitting targets in the northwestern Pacific, since any missile fired from North Korea with a range of more than 3,000 kilometers will fly over Japanese territory, either across northern Hokkaido or Honshu or even directly over Tokyo, should Kim favor a showdown with Japan, as noted in a Kanwa Defense Review analysis.

In either case, Washington won’t have many options: It can either destroy the Kim regime or befriend it.

“Not too many observers believe the US will invade the North and let the Korean Peninsula deteriorate into a state of belligerency – the cost is too high to bear,” said military commentator Andrei Chang.

“Thus the likeliness that Washington may instead seek to establish diplomatic ties with Pyongyang to mollify Kim cannot be entirely ruled out, although the scenario may sound a little bit far-fetched given the ongoing exchange of menace between [the two] sides.”

Kanwa Defense Review has also hinted that the family of a Communist Party of China Politburo member is helping Pyongyang bypass United Nations sanctions and smuggle materiel for its nuclear tests, citing a US intelligence official.

“Beijing has been hijacked by Pyongyang’s nukes when the border between the two countries is over 1,400km long, and China’s northeastern provinces may just suffer as much should Pyongyang choose a suicidal nuclear war to fend off invaders, either from Washington or PLA soldiers from across the border,” said the magazine.