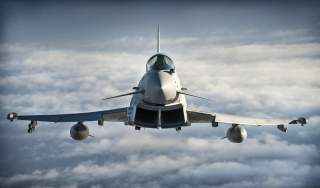 Germany has officially asked the United States to explore certifying its Eurofighter aircraft to carry tactical nuclear weapons. The move might signal that Berlin does not want to purchase America’s F-35 Joint Strike Fighter.

Under NATO’s nuclear sharing arrangement, the United States bases tactical nuclear weapons in various countries in Europe. In the event of a conflict, Washington would release these weapons (the B61 gravity bomb) to the host nations, which would delivery them using their own nuclear-capable aircraft (flown by pilots trained in nuclear missions).

Germany’s Air Force, the Luftwaffe, is one of the NATO countries that hosts U.S. tactical nuclear weapons and is equipped with delivery systems. In specific, the Luftwaffe has designated its Tornado fighters as its dual-use aircraft (i.e. ones capable of both conventional and nuclear missions). Although Berlin has around 85 Tornado fighters, these are rapidly aging and scheduled to be retired in 2025.

Germany is known to be considering four different aircraft to replace the Tornados: the F-35, Boeing’s F-15 Eagle, Boeing’s F/A-18E/F Super Hornet and an upgraded Eurofighter. It is believed that the United States would prefer Germany to select the F-35A as its next dual-use aircraft, although Washington does not officially take a position. Besides the fact that this is an American plane, the United States and other European partners have decided to make the F-35A their next dual-capable fighter. Thus, it is already being certified. At the same time, the F-15 and F/A-18 are also American planes and have both been certified to carry the B61. What really distinguishes the F-35 is that it is a fifth generation fighters with stealth capabilities.

On June 20, however, Reuters reported that Germany is pushing the United States to consider certifying the Eurofighter as a dual-use aircraft. “Germany’s defence ministry sent a letter to the U.S. Defense Department in April asking whether certification of the European jets was possible, how much it would cost, and how long it would take,” Reuters reported, citing “sources familiar with the matter.” The same article added that “top U.S. Air Force and Pentagon officials are working to respond to the German query.”

Timing is important here. Airbus, which makes the Eurofighter along with Britain’s BAE Systems and Italy’s Leonardo, claims the plane could be certified by 2025 when the Tornados are set to be retired. But a German military source told Reuters that the U.S. government has suggested certification could take between seven to ten years because first Washington must certify the F-35.

Although the Eurofighters can almost certainly be modified to carry the B61, the biggest question is whether the fighter jets will be able to survive on a nuclear mission to Russia given Moscow’s growing air defense capabilities. The Eurofighter is often described as a 4.5 generation fighter, meaning that it lacks stealth. Boeing, which makes the F-15 and F/A-18, as well as the Eurofighter consortium, argue that their fourth-generation jets will work as long as they make use of jamming capabilities.

Others have doubts. Gary J. Schmitt of the American Enterprise Institute has written that by selecting the Eurofighters “you are asking a Luftwaffe pilot to bring a knife, albeit a very capable knife, to a gunfight.” Similarly, Daniel Gouré, a former Pentagon official who is now a senior vice president at the Lexington Institute, has argued: “the ability of the Typhoon, like all fourth-generation fighters, to penetrate Russia’s integrated air defenses is already questionable. Because the nuclear deterrent mission must be credible from the outset of hostilities, before Russian air defenses have been attrited, the use of fourth-generation aircraft in this role is increasingly nonviable.”

This was not a one time event. Muellner repeatedly stressed publicly that his service wanted the F-35. “The Luftwaffe considers the F-35’s capability as the benchmark for the selection process for the Tornado replacement, and I think I have expressed myself clearly enough as to what the favorite of the air force is,” he told reporters last year. This pitted him against the Ministry of Defense, which is known to favor the Eurofighter. Muellner refused to stop speaking out about the F-35 and earlier this year he was fired for it.

Of course, Germany can’t fire the United States if it refuses to certify the Eurofighter or slow rolls the process. But Berlin could decide not to provide dual-use aircraft to carry U.S. tactical nuclear weapons. This was a concern of the U.S. Air Force not too long ago.