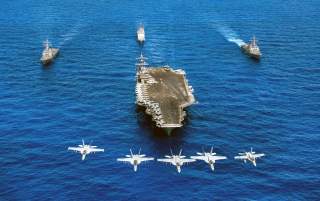 By 2020, North Korea will either be a post-atomic wasteland; an active war zone; or a de facto nuclear-armed state with a fully developed intercontinental ballistic missile (ICBM) capability, and grudgingly accepted as such. To paraphrase Churchill’s familiar bon mot on democracy, learning to live with that reality would be the worst outcome, except for all the alternatives.

North Korea is no longer pursuing nuclear capability; it is a nuclear-armed state. It has maybe 60 nuclear bombs already, ICBMs to put US mainland cities within range and the technology to miniaturize nuclear warheads for increased range.

Solid fuelled launchers and 100-odd nuclear facilities and assets hidden in deep mountain recesses give it strategic depth against ‘surgical’ strikes. The only remaining technological gap is to make the bombs survive the rigors of extreme temperatures, gravity and vibrations on re-entry into the earth’s atmosphere. This is a matter of time.

Northeast Asia is a dangerous cockpit for a nuclear war that could directly involve four nuclear-armed states (China, North Korea, Russia and the United States), plus South Korea, Japan and Taiwan.

The prospect of a second Korean war has become increasingly possible, but not yet probable, with an extraordinary exchange of threats and taunts. US President Donald Trump mocked Kim Jong-un as ‘Rocket Man’ while Kim derided Trump as ‘a mentally deranged dotard’.

Premeditated military strikes by either side are unlikely triggers to a nuclear exchange. Instead, the fuse of an unwanted nuclear war could be lit by a fatal miscalculation in the instrumental recourse to brinksmanship by both sides. US threats could spook Kim into launching a preemptive attack if he fears an imminent US attack.

Alternatively, his serial provocations could incite a South Korean or US military response that creates an unstoppable escalation spiral. The logic of Trump’s ‘America First’ policy contains the rationale for preventing North Korea from acquiring the capacity to strike the US mainland, regardless of the scale and gravity of the harm inflicted on South Koreans, Japanese and others in the region.

The non-proliferation train left Pyongyang Central in 2006 with the first of six nuclear tests. North Korean officials confirm that their biggest lesson from the fates of Slobodan Milosevic (Serbia), Saddam Hussein (Iraq) and Muammar Gaddafi (Libya) has been to get nuclear weapons to neutralise US regime-change tactics.

The Kim dynasty has outwitted the United States with more tenacity, resourcefulness and single-minded determination. There is nothing the world can offer Kim that he would value more than his prized bomb.

China, Russia and North Korea will also have taken note of US unreliability in honoring the multilaterally negotiated Iran nuclear deal, instead returning to a regime-change policy. That rather limits the range of realistic options for resolving the escalating crisis.

Counter-intuitively, sanctions suffer from the law of diminishing returns. Any country is most exposed to the threat of sanctions when it is fully integrated into the global economy. North Korea is already so isolated that the threat of further sanctions is unlikely to make Kim’s cohorts tremble with trepidation.

China accounts for over 80 per cent of North Korea’s external trade. Yet a study by London’s International Institute of Strategic Studies concluded that even if China imposed a total oil embargo on exports to North Korea, it would cause economic pain but neither trigger a collapse of the North’s economy nor compel it to change nuclear behavior.

Military strikes are a non-starter, despite a ‘pattern of comments that indicate a preference for a military response to North Korea’. The United States simply does not have the required degree of certainty to identify, locate and destroy all three categories of nuclear targets: warheads, the bomb production infrastructure and delivery vehicles.

And if Kim survives with even a few of his nuclear weapons, he could order one of the worst mass killings in history. The several thousand artillery rockets that the North can rain on the South give it the capacity to flatten Seoul and other targets, with the likely death toll in the hundreds of thousands.

Can China help? Chinese leaders and analysts separate their personal distaste for the risk-prone and prickly Kim from their abiding strategic interests vis-a-vis the peninsula. A reunified Korea allied to the United States would be even less compliant in accommodating China’s strategic and foreign policy interests, while any regime collapse in Pyongyang would produce a mass of unwelcome refugees flooding into China.

Conversely, a fully nuclear-capable North Korea is a far bigger strategic headache for the United States than for China. To all intents and purposes, China has concluded that North Korea is here to stay as the world’s ninth nuclear-armed state. Beijing’s strategy is to absorb US pressure to rein in Pyongyang by appearing to be trying hard to coerce it into denuclearisation, without really taking any meaningful steps to do so.

Denuclearisation is dead and should be buried. This leaves the mixed strategy of deterrence, containment and engagement. Pyongyang should be left in no doubt that any attack on South Korea, Japan, US forces in the region or US territory will provoke an all-out war guaranteed to defeat North Korea and liquidate the regime.

Engagement must focus on the elements of a ‘grand bargain’ as was done with Iran: a freeze-for-freeze as proposed by China and backed by Russia, meaning a suspension of US–South Korean military exercises in return for a freeze on North Korea’s nuclear and ballistic missile testing programs; formal diplomatic recognition of and relations with Pyongyang by the United States; and a formal peace treaty following the armistice that has been in operation since 1953.