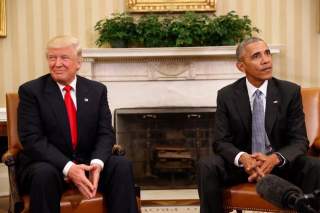 It has become clear that Trump and the people advising him view the religion of Islam per se as the problem. To their way of thinking, people such as myself and others mentioned above are naïve because we focus on interpretations of a religion rather than assuming it must mean one and only one thing. Because, like their predecessors in the Oval Office, but for very different reasons, they refuse to distinguish Islamism from Islam, they are causing joy among the jihadists who seek to turn all believers in Islam against the West.

In January, Pascal Bruckner published Un racisme imaginaire: islamophobie et culpabilité (An imaginary racism: Islamophobia and guilt). We would do well to listen to voices such as Bruckner’s and that of France’s brave Prime Minister Manuel Valls, who had the intelligence and courage to speak the truth after the attacks on Charlie Hebdo, the Bataclan and the Hypercacher supermarket: Valls said that France was not at war with Islam or with Muslims but with radical Islam. Now that Angela Merkel, whose decisions have saved thousands of Muslims from Islamist terror, has publicly made the same point, Americans should learn from these speakers of the truth in Europe.

­­­Effective opposition to Trump will require some soul-searching among those who have refrained from speaking frankly about Islamism since 9/11. In the warp-speed world of Twitter and social media, everyone interested in this issue would benefit from taking time to read the scholarship that the two previous administrations and too much of the foreign-policy establishment dismissed or ignored. In the past, democratic leaders have educated citizens about complicated issues, and they can and should do so again.

Jeffrey Herf, who has written numerous books on Nazi and modern Germany, is Distinguished University Professor of modern European history at the University of Maryland in College Park. In May 2016, Cambridge University Press published his Undeclared Wars with Israel: East Germany and the West German Far Left, 1967–1989.