Why President Trump's Defense Budget Is Dead on Arrival 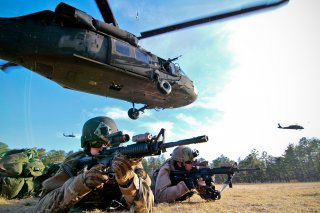 President Trump’s first defense budget is a more muscular version of former president Obama’s plans. It is a budget that begins to repair—but does not rebuild—the U.S. military.

Touted as a “readiness recovery” in Pentagon documents, the request comports with guidance earlier in the year from Secretary of Defense Jim Mattis to focus investments on readiness, people and facilities. But it does not live up to Congressional expectations to better align resources with strategy after years of a growing mismatch.

• The White House and Pentagon should not be surprised at Congress’ near-universal dismissal of the budget.

Congress has had weeks to digest—and ultimately dismiss—this budget after the “skinny” version was released in March. Now that they have the details, they’ll be even less inclined to support it. Targeting specific federal programs has real-world consequences for their voters.

Further, while the cuts identified have strong and vocal constituencies that will mobilize quickly, the defense increases targeted to readiness share no such loud voices in support.

Had the president’s first budget spent more on modernizing the fleets and inventories across the services—and by extension bolstering American jobs in the highly-skilled aerospace, defense and shipbuilding manufacturing workforces—it may have been slightly better received.

• There is currently no realistic plan anywhere to amend or repeal the Budget Control Act.

One of the biggest reasons President Trump’s budget is being billed as “dead on arrival” on Capitol Hill is there is no plan to loosen the shackles, known as the Budget Control Act, or the BCA. Instead, the blueprint proposes to take a dollar from many federal priorities across government to pay for the defense increase.

The Republican Study Committee has modeled budgets like this in the past and they have failed, even in the more fiscally conservative House. Their chances are no better now.

Absent a conversation about a realistic and bipartisan plan to increase all discretionary spending to some extent, it is unlikely Congress will achieve regular order this summer and move spending bills in either chamber. More gridlock means this likely will not wrap up before the winter holidays.

• President Trump’s ten-year “BCA by another name” plan will be anathema to Congress.

Not only did the president’s budget put forth a completely unrealistic plan to change the legal spending limits, his ten-year plan would basically endorse the Budget Control Act model (albeit, by another name) but leave in place more constricting spending caps for the next decade.

The Budget Control Act expires in four years. To say most of Congress has buyer’s remorse over the BCA is an understatement. It could not pass if it were up for a vote today. The notion that Capitol Hill will agree to anything resembling further squeezing of discretionary accounts—especially when they are not the cause of the federal government’s fiscal woes—is fantasy.

• The White House’s ploy to cap and then restrict overseas contingency operations is laughable.

At the same time that it proposes a smaller defense budget than the hawks in the GOP had justified, the White House wants to cap the one relief valve to its spending handcuffs: overseas contingency operations.

While it is less than ideal, all parties have agreed heretofore to grow defense primarily through this off-the-books account absent the ever-elusive grand bargain, including previous presidents, Pentagon leaders—both uniformed and civilian—and Congress.

Congress will not let one arm of the executive branch unilaterally dictate the Hill restrict its constitutionally mandated power of the purse, especially when the White House seems to have a tin ear regarding the political marketability of their budget. Further, politicians will have the backing of the Joint Chiefs, who understand well that, in the end, money is money and they’ll take it any way they can get it.

• Without a budget endgame, the appropriations process is stalled.

The White House seems unwilling or unable to admit a bipartisan deal to modify the Budget Control Act is required to avoid the “do nothing” label for Congress this summer.

The 2017 budget negotiations provide a playbook for how 2018 will likely be resolved. But with the White House taking a back seat, Congress is going to have to lead on developing the contours of a deal, negotiating a more realistic defense-to-nondefense increase ratio, and identifying offsets whenever available.

Congress doesn’t get to take a pass on keeping the lights on across government and fulfilling their Constitutional duties. Shutdowns hurt voters unnecessarily and don’t change the outcome, no matter their length in this case.

As Capitol Hill re-learned when passing the omnibus spending bill for 2017, it’s best to just put your nose to the grindstone, cut a deal with your colleagues, and keep the White House out of it if you want to actually pass mandatory legislation.