Why Is Qatar Building a Massive Air Force? 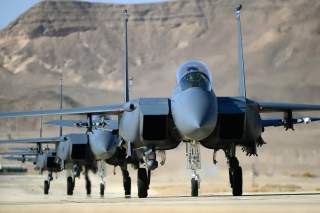 The tiny Gulf nation of Qatar has launched a massive buildup of air power for an unclear purpose.

The latest development in this saga came in September, when British Defense Secretary of Defense Michael Fallon and Qatari Defense Secretary Khalid bin Mohammed al Attiyah signed a Letter of Intent for Doha to purchase twenty-four Eurofighter Typhoon aircraft from London. That came on the heels of Qatar announcing a deal to purchase thirty-six Boeing F-15 Qatar Advanced-variant Eagles from the United States for a reported $12 billion. And in 2015, Qatar signed a $7.5 billion deal with France to purchase twenty-four Dassault Rafale fighter jets, MBDA missiles, as well as pilot and support personnel training.

What makes these deals particularly shocking is how much of an increase they represent from what the Qatari Air Force currently fields. Despite hosting a large U.S. air base, Qatar itself has primarily relied on twelve aging Dassault Mirage 2000-5 fighters. Thus, the eighty-four different fighters are a seven-fold increase. This led Aviation Week’s Tony Osborne to comment, “Such growth in airpower capability and capacity is virtually unprecedented in recent times, and historians would likely have to look back to the outbreak of World Wars I and II to see such rapid fleet growth.” Quantity is not the only aspects that stands out. As IHS Jane's noted, Qatar's “decision to replace its one current fighter type with three different types is curious.”

Regarding the planes’ capabilities, Jane’s reported:

The plane can be fitted to serve in either air superiority or bomber roles. For the former mission, it can carry “16 AIM-120 Advanced Medium-Range Air-to-Air Missiles (AMRAAMs); four AIM-9X Sidewinder short-range missiles; and two High-Speed Anti-Radiation Missiles (HARMs).” A bomber configuration would feature a few of the AMRAAMs and HARMs to go along with sixteen Small-Diameter Bombs (SDBs) and one 2,000 pound Joint Direct Attack Munition, among other armaments.

The Eurofighter Typhoon is a twin-engine jet produced by a consortium of European firms, including Italy's Leonardo, France's Airbus and the UK's BAE Systems. As Robert Farley has explained on these pages, it is what many consider 4+ generation fighters, enjoying capabilities that outstrip fourth generation platforms without the stealth of newer fifth generation plans. Farley has also written that

the Typhoon has a top speed of Mach 2, a high service ceiling, an excellent thrust-to-weight ratio, and ‘supercruise’ capabilities. Current Typhoons carry the last mechanically scanned radar array to be deployed in an advanced fighter, although new electronically scanned arrays may eventually replace these radars in older models.

The high maneuverability of the Typhoon makes it an excellent dogfighter. It also has Beyond-Visual Range (BVR) capabilities, and carries AIM-120 missiles. Qatar’s Typhoons are expected to be equipped with Marte ER anti-ship missiles.

The Rafale is another multi-role fighter and traces its origins back to the 1980s, when France used it to replace a number of different aircraft. It is smaller than the Typhoon but also features some 4+ generation features. According to Popular Mechanics:

Twelve wing-mounted hardpoints can carry a combination of air-to-air missiles, air-to-ground missiles, sensors, and drop tanks. Despite the fact that the Rafale is now a 30-year-old design, upgrades such as the RBE2 AA active electronic scanning array (AESA) radar, Damocles targeting pod, Meteor air-to-air missiles, and SCALP cruise missiles have kept the design competitive with other so-called “4+ generation” fighters.

The Rafale has not enjoyed as strong international sales as the Typhoon. Whereas the Eurofighter plane has been used by Germany, Spain, Italy, Austria, Saudi Arabia, Oman and Kuwait, France has been the sole operator of the Rafale for most of its existence. This has begun to change recently first with the Qatar sale followed by agreements with Egypt and India.

It’s unclear what military missions Qatar envisions for this massive influx of firepower. Doha has shown a greater willingness in recent years to participate in some fashion in regional military coalitions like those against ISIS. This alone probably cannot account for why it is buying so many different types of aircraft that will be extremely difficult to integrate given the small size of its air force. In fact, there is strong speculation that Qatar might have to use foreign personnel to handle the new aircraft.

Rather, as Tony Osborne has speculated, the rationale is probably driven at least as much by politics as any strategic considerations. Qatar is currently increasingly isolated in the region as a Saudi-led coalition of at least ten nations have cut off ties with Doha over its friendly relations with Iran and groups like Hamas and the Muslim Brotherhood. Signing huge defense contracts with Western nations will make it more difficult for those nations to join in the Saudi campaign against Qatar. Despite the large price tag, this outcome is probably worth it for a country that boasts the largest per-capita-income in the world.