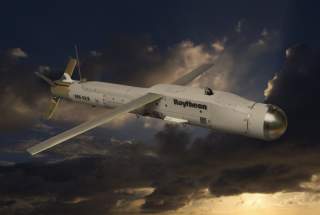 The Small Diameter Bomb II, or SDB II, is designed to destroy moving targets in all kinds of weather, such as small groups of ISIS or terrorist fighters on-the-move in pick-up trucks.

The new bomb is slated to be operational on F-15E fighter jets by 2018, Raytheon and Air Force officials said.

“It is making good progress. It is moving along well in its test program. We started the first Low Rate Initial Production for 144 weapons back in June(2015). The threshold platform is the F-15E. The Navy is looking at integrating that on the F-18,” Lt. Gen. Arnold Bunch, Air Force Military Deputy for Acquisition, told Scout Warrior in an interview last year.

The SDB II could be operational on an F/A-18 Super Hornet by 2020, Raytheon officials said.

Raytheon officials explained that the surrogate T-72 tank was moving at tactically relevant battle speeds when it was destroyed by the SDB II during the live-fire test.

Most of the testing of the SBD II thus far has been on an Air Force F-15 Eagle Fighter Jet, however the weapon has also been fitted and tested on the F-35 Joint Strike Fighter.

Engineers are also working on plans to integrate the bomb onto the F/A-18E/F Super Hornet and F-16 as well, Raytheon officials said.

The SDB II also has the ability to classify targets, meaning it could for example be programmed to hit only tanks in a convoy as opposed to other moving vehicles.  The weapon can classify tanks, boats or wheeled targets, Raytheon officials added.