Why Rovere Is Wrong About Trump 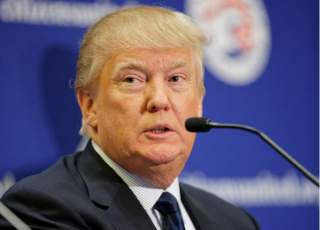 Crispin Rovere recently declared in the National Interest that members of the Republican Party apparatus—namely, elite foreign policy signatories to the now-famous letter declaring their refusal to work in a Trump administration—were obliged to follow the lead of the rank-and-file in mounting the Trump bandwagon. But how persuasive is his contention?

Rovere goes awry from the very beginning with his assertion that “it’s a privilege to serve, not a right. Trump is entitled to pursue his foreign-policy agenda; the role of advisers is to help him achieve those goals.” It is curious that Rovere would deputize the language of “privilege” and “right” (or at least “right” in the context of “entitled”) in support of his argument, since these are two words that have never quite rung true to conservative ears. Nevertheless, this argument is easily refuted. Not a single signatory to Cohen’s letter in any way acknowledged a “right” to serve; as it happens, publically demurring support for a potential president whose thin-skinnedness routinely figures into his business practices is the surest means to see that this “right” goes unexercised. Moreover, just because a man stands on the Capitol dais and takes the proscribed oath of office does not endow him with a newfound halo. It is no “privilege” to serve an individual if the fracas he courts and the positions he endorses run contrary to those first principles individuals in politics should have already developed before entering Theodore Roosevelt’s figurative arena.

William F. Buckley certainly understood this idea. Though as editor of National Review he had accrued a status as the doyen of Republican Party ideology, he did not shy from bucking that party label when he felt the party had compromised its own convictions. He rightly called out the party for nominating John Lindsay as its candidate in 1965’s New York City mayoral race for the sake of vote-grubbing convenience.

Throughout his article, Rovere's disdain for principled consistency is pervasive. He halfheartedly feigns benevolence, saying there is no shame in the elites walking away from their pledge to never support Trump. But then he continues by shaming and libeling the same as either prideful, embarrassed, or cowardly. Of course, holding steadfast to principles should be lauded or at the very least respected. But Rovere affords his audience no such respect. Sure that Trump's foreign policy "will endure for several generations," he argues that those elites who refuse to join Trump will be left in the cold. If any piece of his argument is likely to resonate with his intended audience, this might be it. Few things are feared more in Washington than irrelevance in the halls of power.

What makes it so unlikely that the Buckleys of today would cast a ballot for Trump? The mogul’s contradictory policy pronouncements aside, they almost certainly disagree with Rovere’s assertion that “there are no set personal qualities that define, or are prerequisites for, the presidency.” If our Australian friend meant this in a strict constitutional sense, then he stumbled into being technically, pedantically correct: after all, the Framers only ever articulated three ironclad requirements. But there is no use in being coy: in Rovere’s opinion, the Road to Character is seemingly more cul-de-sac than thoroughfare with regards to what Americans should expect of their president. In fact, there absolutely are such qualities and prerequisites which qualify or disqualify presidential candidates for the office. Over time, the term “presidential” has been rightly imbued with an idea of statesmanship, dignity, and decorum. Our society has long held current and prospective presidents to the highest moral and professional standards, and that is undoubtedly to our benefit. Those fortunate few who ascend to the highest office in the land are the representative face of the most economically and militarily powerful nation on earth. They are the de facto leaders of the free world. As such, they should be held to the highest standards of professionalism and conduct themselves in a manner worthy of the office.

Beyond partisan identifiers there exists a bipartisan recognition of the underlying character the presidency mandates. So when John Adams, in his first night living in the newly completed White House, wrote to his wife his profound hope that “none but honest and wise men rule under this roof,” it is hard to fathom any instance in which the second president would have meant a character like Donald Trump, who has so gleefully defenestrated decorum throughout the primary campaign. Yet for Rovere and others, this does not matter, because Trump’s apotheosis was the choice of the people at play!

In Rovere’s model of how the triangular relationship between candidate, voters, and elites ought to operate, vox populi, vox dei holds irrefutably true, and any elites who disagree can either get on board or get out of the way. Yet this fundamentally misunderstands the role of elites in a democratic society. As Andrew Sullivan recently pointed out in his inaugural New York Magazine column, “Part of American democracy’s stability is owed to the fact that the Founding Fathers had read their Plato. To guard our democracy from the tyranny of the majority and the passions of the mob, they constructed large, hefty barriers between the popular will and the exercise of power.” Quite simply, elites do not exist to ratify the general public’s mistaken judgement. They exist, to paraphrase from Edmund Burke, to lubricate the engine of government with a sense of judgement and knowledge likely not available to the average voter but nevertheless crucial if the motor is expected to run smoothly.

Rovere’s claim that Trump has “reinvigorated popular interest in democracy” is predicated on his having “won more votes than any other candidate in Republican primary history.” In other words, Rovere defines reinvigorated democracy purely in the context of majoritarianism; a mean show of hands. Yet any veteran of an AP Government class could tell you that an appeal to mere procedure—i.e. the mechanics of voting—does not solely an American democracy make. This is because democracy as Americans have historically understood it is more than a simple nod to procedural niceties. It also involves the substantive fear of what Madison called the “tyranny of the majority.” So whenever Trump blithely inveighs against a free press that deigns to be critical of him, proposes to arbitrarily strip the Fourteenth Amendment protections of natural born citizens, and vastly conflates the Article II powers of the presidency with an imperial presidency, it should not matter if the American people back him with unanimity to the hilt. Such politics cannot be graced with the forgiving label of “democratic.”

Finally, above and beyond what we know of the Trump campaign thus far, there is the outstanding matter of what we do not know of him—the “unknown unknowns,” to crib Donald Rumsfeld’s famous line. In arguing that the GOP foreign-policy elites should adhere to a sense of duty and serve Trump, Rovere leaves key questions unanswered such as whether Trump’s unpredictability as a central tenet of his proposed foreign policy and reversing himself on key policy issues almost every other television appearance are good things? If Rovere wants to make a case for Trump, he will have to offer more than sweeping pronouncements backed by scant evidence.

Matthew Pennekamp and Kevin Reagan are resident junior fellows at the Center for the National Interest.