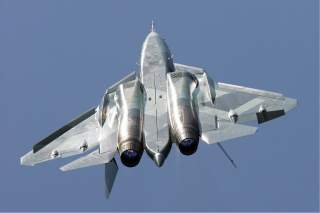 A pair of Sukhoi Su-57 PAK-FA fifth-generation fighters flew over Moscow’s Victory Day Parade on May 9, demonstrating the technical capabilities of the Russian military.

An interim version of the Su-57—which incorporates stealth technology—is expected to complete development in 2019. The Russian Air Force hopes to take delivery of a dozen pre production version jets for operational testing that same year. However, it is not clear how many of the current version of the Su-57—which is powered by a pair Saturn AL-41F1 engines from the Su-35 Flanker-E—Russia will buy. The Kremlin is likely to defer large-scale purchases of the aircraft until the new much more powerful developmental izdeliye 30 engines are ready in the mid-2020s.

The Indians were co-developing a version of the Su-57 for their own needs in partnership with the Russians. However, New Delhi has reportedly dropped out of the project partly because Russia would not allow India access to the jet’s source codes, but also because of technological issues—such as lackluster avionics, less than stellar stealth and underpowered engines. The Russians are working on improving the avionics and the engines are going to be replaced, however the Indian concern about the Su-57’s stealth is valid—there is very little that can be done to meaningfully and substantially improve the aircraft’s radar cross section. Nonetheless, the Indians are willing to revisit a Su-57 purchase at a later date.

The basic problem with the Su-57’s stealth is there are significant issues with the shaping of the PAK-FA airframe. As a source correctly pointed out to Business Insider recently, there are numerous radar cross section hotspots on the Su-57 airframe that are immediately obvious to the trained eye. Moreover, while the Russians no doubt have the capability to design a stealth aircraft, it is an open question if Moscow has the machine tools necessary to mass-produce a stealth aircraft.

However, from the Russian perspective, Moscow does not believe in stealth as a standalone survivability tool—particularly for penetrating into extremely heavily defended airspace. But then Russia does not really have to worry about such a problem, the West—save for the U.S. Navy—does not field complex networked integrated air defense systems comparable to Moscow’s S-300V4 or S-400. In the event that Russian forces would have to strike inside such a heavily defended region, the Kremlin’s forces expect to rely of on long-range standoff weapons such as Kh-101/102 air launched cruise missiles—which can penetrate any current air defense system at low terrain hugging altitude from extreme ranges.

Nonetheless, the Su-57 does incorporate some degree of forward sector radar cross section reduction, which does help to improve survivability in the air-to-air arena. However, the Russians prefer to use tried and true techniques such a beaming—or exploiting a pulse Doppler radar’s clutter notch to essentially disappear from enemy radar by turning 90 degrees to the direction of the enemy radar. That essentially makes the Su-57 appear as a stationary object relative to the enemy radar and is thus filtered out (pulse Doppler radar have a very difficult time with objects moving side to side). This is simply a matter of physics, there is very little an enemy can do to counter it except to adopt additional sensors—such as infrared search and track—and improve signal processing.

The Russians are hoping the Su-57 sensor suite—which includes N036L-1-01 L-band radar arrays—will alert its pilots to the general vicinity of enemy fifth-generation stealth fighters such as the F-22 or F-35. Tactical fighter-sized stealth aircraft must be optimized to defeat higher-frequency bands such the C, X and Ku bands as a matter of physics. Those aircraft show up on radar operating at longer frequency wavelengths such the L-band, however, the track is not precise enough to engage a target with a missile.

However, the L-band radar—part of the N036 Byelka radar suite—narrows the search area down so that the Su-57 can scan a smaller volume of space with its X-band N036-1-01 and N036B-1-01 active electronically scanned array apertures. The radar is further augmented with the 101KS Atoll electro-optical targeting system and the L402 Himalayas electronic countermeasure suite, which would help further refine a track from the L-band radar. The idea is that a focused search by the jet’s other sensors would result in a weapons quality track to engage a fifth-generation fighter such as a F-22 or F-35.

Would it work? No one knows. We’ll have to wait for World War III to start before we find out for sure…