Why Russia and China Should Fear America's Littoral Combat Ships 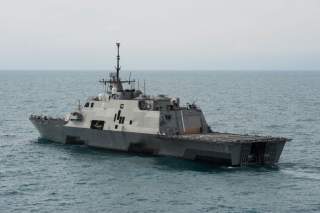 Lighter weight sonar systems will better enable the LCS to hunt enemy submarines and maintain its maneuverability such that it can quickly move to avoid attacks or go on offense.

The idea is to harness lighter Variable Depth Sonar and AN/SQR-20 Multi-Function Towed Array systems, along with other anti-submarine technologies, and enable the LCS to receive acoustic signals or “pings” from enemy subs in different maritime conditions and at greater distances.

“We were able to get submarine detections at long ranges,” Capt. Casey Moton, LCS Mission Module Program Manager said in an interview with Scout Warrior.

As part of the effort, the service has been searching for mock-enemy submarines off the coast of California with its USS Freedom boat, or LCS 1. The Navy has awarded three developmental contracts to industry as part of this initiative to engineer more effective and functional systems for the LCS.

“We will go forward with one, two or three of them, do additional design work and then based on that effort we are going to build an engineering development model and also have the weight reduction. The plan right now it we'll start testing at the end of 17 and go into operational testing and IOC (Initial Operating Capability) in 2018,” Moton added.

The Variable Depth Sonar, VDS, and Multi-Function Towed Array, MFTA, scan the undersea domain searching for acoustic signals and frequencies consistent with an enemy submarine; information is then related back up to an on-board LCS command center.

“They listen for a continuos active ping. Then you wait for a period of time and there is another ping. This enables us to track the submarine and we get that energy back on the passive towed array. That system was very effective for long range submarine detection,” Moton added.

Lighter weight submarine hunting elements are of particular importance to the LCS – as the ship relies upon speed and maneuverability for increased combat performance. Greater agility naturally enable the ship to use its speed of 40-knots to avoid incoming enemy fire or more quickly position itself to attack enemy locations.

The Variable Depth Sonar is engineered to travel beneath a thermal layer in the ocean where the temperature stops changing – the layer can act as an acoustic boundary, Moton described.

“If you have a sonar above that layer, it can be hard to get that sonar into other parts of the water. Variable Depth Sonar allows us to put the submarine shallow above the layer or below the layer - we can put the sonar below the layer,” Moton explained.

The anti-submarine package makes use of a helicopter-like vertical take-off-and-landing drone able to scan the ocean for enemy activity and send back real-time video images through a data-link.

“We are making an improvement in how we operate our sonar. Signals will be received by the towed array, data will be given to a helicopter and then the helicopter will fly out and use its own sonar and sonobuoys to locate a submarine and drop a weapon,” Moton said.

An advanced computer system on board the LCS is designed to integrate incoming sonar and targeting information from underwater assets and helicopters, helping to acquire and relay combat relevant data.

As part of this effort the LCS is connected via a data link to the Navy’s P-8 sub-hunting aircraft.

“We are going to put the LCS out with the package including two sonars and passive towed array working together. The ship will have a helicopter on board with torpedoes and the ship will have a torpedo counter measure system,” Moton said. “The helicopter will either be airborne or it will know where the submarine is based on the LCS sonar detection.”

This anti-submarine developmental effort is progressing concurrently alongside a broader effort to up-gun the LCS with improved weapons and survivability technology. The idea is to better enable a littoral vessel such as the LCS to perform missions in higher-threat environments – while being less vulnerable to attacks from enemy submarines. Longer range, more high-tech sonar on board and LCS could enable the ship to locate, and potentially avoid, the weapons range or envelope of enemy subs.

This ability is increasingly important in light of high-tension areas such as the South China Sea where there are numerous island coastal areas with shallow water. Furthermore, advances in submarine quieting technologies are increasingly making them harder to detect.