Why Russia and China Should Fear the X-37B Space Plane 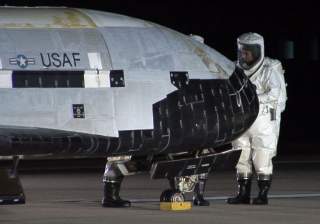 A transformation in military space capabilities is occurring hundreds of kilometers above the Earth’s surface as the US Air Force X-37B Space Plane logs over 500 days in orbit in its latest mission.

The unmanned X-37B Space Plane is designed for long-endurance missions that are highly classified. It’s officially referred to as the ‘Orbital Test Vehicle’, and is described as a platform for testing “reusable spacecraft technologies for America’s future in space and operating experiments which can be returned to, and examined, on Earth.” A total of four missions have been flown since April 2010, with the fourth in progress since 20th May 2015. It’s designed to be launched on an expendable Atlas V booster, and there are currently two operational X-37Bs in the USAF’s inventory.

The current mission is testing a new type of ion-engine called a ‘Hall-effect thruster’. It was the Hall thrusters on the first USAF Advanced Extremely High Frequency (AEHF) satellite that saved the satellite when a rocket motor failed to raise it to the correct orbit. Hall thrusters provide higher thrust than traditional ion propulsion, with sustained thrust allowing a spacecraft to reach about 50km per second—much faster than even NASA’s Voyager 1 space probe now travelling out of the solar system at mere 17km per second. For satellites they provide a much more cost effective way of remaining in the right location within an orbit.

The laws of orbital dynamics and the fact that rockets use fuel at an alarming rate means satellites and spacecraft are not maneuverable like fighter aircraft within Earth’s atmosphere. Minimizing fuel use also demands the use of Hohmann transfer trajectories to move between orbits, reducing their orbital agility even further. Rocket engines and the need to carry large amounts of fuel adds mass and complexity to spacecraft design, blowing out cost and extending development time. Once the rocket fuel is used up, the spacecraft or satellite is useless.

The X-37B potentially changes this situation, as not only can the spacecraft be recovered and reused, but it uses a small amount of Xenon gas that is far lighter than traditional rocket fuel like hydrazine, though it has a high storage density to allow greater useful fuel. Maneuvering with Hall thrusters is slow compared to rockets (even though prolonged acceleration over time produces much higher velocities), but far more cost effective in terms of fuel. So the X-37B can stay up longer, maneuver at far lower cost in terms of fuel than a similar vehicle with traditional rockets, and enjoy a greater ability to maneuver within and between orbits. This flexibility would allow it to do more in space, including close surveillance of an adversary’s satellites in orbit, both in terms of optical imaging, and electronic intelligence and signals intelligence gathering. It can also fill a gap if satellites are badly positioned to respond to short notice events like a nuclear test in North Korea. The X-37B suggests a new generation of space capabilities beyond traditional satellites.

The Obama administration’s space policy eschews the weapons in space option. It instead emphasizes efforts towards ensuring space resilience and Space Situational Awareness (SSA) as a key aspects of space policy to deter adversary counter-space threats like anti-satellite (ASAT) weapons. Reconstitution of space capabilities after an adversary ASAT attack is also an essential aspect of space resilience, and DARPA is developing a vehicle similar to the X-37B, the XS-1 Spaceplane, which is designed to launch payloads at low cost in a responsive manner. Matching this responsive space launch capability with low-cost Cubesats means the US can rapidly replace lost capability after an attack. Furthermore an ability to temporarily operate in a degraded space environment may also mitigate the effects of losing access to space capabilities. Yet the X-37B would give the next Administration an option to quickly develop a very advanced ASAT capability if it were needed. That’s going to be an important issue for the next occupant of the White House to consider, given that both Russia and China are continuing to ignore US efforts to prevent the weaponization of space, and are developing a broad range of ASAT capabilities that will allow them to threaten the vital satellites depended upon by the US and its allies. SSA only permits the monitoring of space activities, and real space resilience may need to include defending critical high-end satellites such as missile early warning, GPS or strategic communications satellites. An expanded X-37B capability may be an answer to defending these vital assets through providing close-in escorting capabilities that can respond to an approaching threat before it can close within range of its target. For the US to take a step towards the weaponization of space is a policy dilemma for Washington and has implications on space security, both of which will considered in a subsequent article.