Why Russia and China Will Hate America's New Super Tank 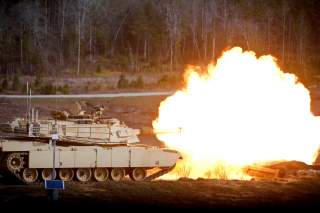 The first MIA2 SEP v3 tank, built by General Dynamics Land Systems, is slated to arrive as soon as this month – as part of a delivery of initial prototype vehicles, developers said.

“The Army's ultimate intent is to upgrade the entire fleet of M1A2 vehicles -- at this time, over 1,500 tanks,” Ashley Givens, spokeswoman for PEO GCS, told Scout Warrior.

“The Abrams has been around since early 80s, and the original designers were forward thinking to build in the provisions for continual upgrade. Over the years, there have been significant improvements in sensor capabilities, power generation, mobility, lethality, survivability, armor and situational awareness,” Donald Kotchman, Vice President, Tracked Combat Vehicles, General Dynamics Land Systems, told Scout Warrior in an interview.

Facilitating continued upgrades, innovations and modernization efforts for the Abrams in years to come is the principle rationale upon which the Line Replacement Modules is based. It encompasses the much-discussed “open architecture” approach wherein computing standards, electronics, hardware and software systems can efficiency be integrated with new technologies as they emerge.

“The principle difference between the Line Replaceable Unit and Module is modularity. Currently to initiate a repair or an upgrade of a LRU, you must remove the entire unit from the tank, take it to a test bench and make the changes. Under the Line Replaceable Module concept, internal diagnostics isolates and determines failure at the card level. The card has been constructed such that you can remove it and replace it without damaging it,” Kotchman said. “Similarly, when new capability is introduced or increased computing power is required, changes can be made at the card level rather than redesigning the entire unit.”

The GDLS development deal also advances a commensurate effort to design and construct and even more advanced M1A2 SEP v4 Abrams tank variant for the 2020s and beyond. The v4 is designed to be more lethal, better protected, equipped with new sensors and armed with upgraded, more effective weapons, service officials said.

“The current M1A2 SEPv3 production will transition to the v4 configuration in 2023. The v4 upgrade is currently scheduled to begin production in 2023 with fielding in 2025,” Givens said.

The Army-GDLS deal is also the first contract is for SEPv4 upgrades, which include the Commander’s Primary Sight, an improved Gunner’s Primary Sight and enhancements to sensors, lethality and survivability.

“General Dynamics Land Systems will deliver seven prototype M1A2 SEPv4 tanks to the Army. The contract has an initial value of $311 million,” a company statement said.

While Army officials explain that many of the details of the next-gen systems for the future tanks are not available for security reasons, Army developers did explain that the lethality upgrade, referred to as an Engineering Change Proposal, or ECP, is centered around the integration of a higher-tech 3rd generation FLIR – Forward Looking Infrared imaging sensor.

The advanced FLIR uses higher resolution and digital imaging along with an increased ability to detect enemy signatures at farther ranges through various obscurants such as rain, dust or fog, Army official said.

“Meteorological sensors are being integrated into the fire control system. It provides information into fire control algorithms that help increase the accuracy and precision of your weapon system,” Givens added.

The latter round was introduced in 1993 to engage and defeat enemy helicopters, specifically the Russian Hind helicopter, Army developers explained.  The MPAT round has a two-position fuse, ground and air, that must be manually set, an Army statement said.

A new ammunition data link will help tank crews determine which round is best suited for a particular given attack.

Overall, these lethality and mobility upgrades represent the best effort by the Army to maximize effectiveness and lethality of its current Abrams tank platform. The idea is to leverage the best possible modernization upgrades able to integrate into the existing vehicle. Early conceptual discussion and planning is already underway to build models for a new future tank platform to emerge by the 2030s – stay with Scout Warrior for an upcoming report on this effort.

As part of this broad effort to accelerate Abrams technological advancement into future decades, the Army is fast-tracking an emerging technology for Abrams tanks designed to give combat vehicles an opportunity to identify, track and destroy approaching enemy rocket-propelled grenades in a matter of milliseconds, service officials said.

“We are always looking for ways to enhance the protection provided on our combat vehicles and we recognize Active Protection Systems as one of our highest priorities towards this end,” Givens said.