Why Russia Should Fear North Korea's Nuclear Weapons and Missiles 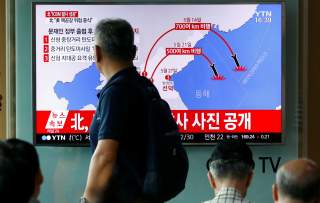 In the event that North Korea tests another Intercontinental Ballistic Missile (ICBM) or potentially launches an attack on the United States, the Pentagon could try to intercept those missiles with the Ground-Based Midcourse Defense (GMD) system. However, as many analysts have pointed out, the interceptors that miss their target could reenter the Earth’s atmosphere inside Russian airspace. Such an eventuality could prove to be a serious problem unless steps are taken to address the issue now.

“You should also be aware of the concern that those interceptors fired from Alaska that miss or don't engage an incoming North Korean ICBM(s) will continue on and reenter the Earth's atmosphere over Russia,” Kingston Reif, director for disarmament and threat reduction policy at the Arms Control Association told The National Interest.

“This carries a nontrivial risk of unintended escalation.”

Jeffrey Lewis, director of the East Asia Nonproliferation Program at the James Martin Center for Nonproliferation Studies at the Middlebury Institute of International Studies at Monterey, told The National Interest that the United States should open a dialogue with Russia on the issue immediately.

Olya Oliker, director of the Russia and Eurasia program at the Center for Strategic and International Studies agreed.

“We have time now to consult with Moscow, talk about plans, discuss how notification would work,” Oliker told The National Interest.

“This isn’t the rocket science part of all this.”

Indeed, in a recent op-ed, Lewis argues that an American interceptor launch could accidentally trigger a nuclear exchange if the Russians mistook such a weapon for an incoming ICBM.

“We can’t assume that Russia would realize the launch from Alaska was a missile defense interceptor rather than an ICBM. From Russia, the trajectories might appear quite similar, especially if the radar operator was under a great deal of stress or pressure,” Lewis wrote for The Daily Beast.

“It doesn’t matter how Russia’s early warning system ought to work on paper, the reality of the Russian system in practice has been a lot less impressive.”

“Whether they actually would enter Russian airspace is probably less important than whether they break the line of sight of Russia's early-warning radars,” Pollack said.

“They do appear to plan in terms of launch-on-warning. That's why I call this scenario ‘Russian Roulette.’”

But how exactly the United States might attempt to shoot down a North Korean missile is scenario dependent.

“In an attack on Hawaii, it seems to me that they might not do so, and ought to be clearly identifiable as being aimed well south of Russian territory if they are detected,” Pollack said.

“In an attack on North America, they almost certainly would be detected by Russian radars.”

“In fact, depending on the target of the attack, the actual engagement could take place above Russia,” Pollack said.

“If interceptors in Alaska are going to try to catch the attack more or less head-on, they'll have to fly out in the direction of Russia. Someone else might be able to model the geometry of the engagement, but just eyeballing it, I could easily envision it happening over Russia's Far East. If the interceptors had to launch later and attempt a crossing shot, they could even end up flying out in the direction of European Russia.”

Pavel Podvig, an independent analyst based in Geneva who runs the Russian Nuclear Forces research project disagreed with Lewis and Pollack. Podvig noted that the Russian early warning system is in far better shape today than it was during the 1990s. While a GMD launch from Alaska might cause alarm, the Russian philosophy has been to essentially absorb the first initial blows before launching a retaliatory counterstrike.

“The Russian system is built to ‘absorb’ events like this,” Podvig told The National Interest.

“We don't have hard data, of course, but my understanding is that even at the height of the Cold War the Soviet Union would have chosen to get a single hit—or maybe even a few—rather than launch its missiles in response, especially in a ‘bolt out of the blue’ situation. Having said that, things do happen and a real-world situation may introduce factors that nobody can predict or control. Coincidences of various kind are possible and the command and control system may react in unpredictable ways. So, the real answer is, we don't know.”

The Russians, however, are not too worried by the prospect of discarded American interceptors landing on their soil. However, Moscow would likely want to be consulted because the interceptors might set off Russia’s ballistic missile early warning system (BMEWS).

“Basically, we would be happy to see them on our soil for study,” Vasily Kashin, a senior fellow at the Center for Comprehensive European and International Studies at Moscow’s Higher School of Economics, told The National Interest.

“Anyway, the chance of them hitting in a populated area in the Russian Far East is extremely small. But of course there is a BMEWS issue, so it is better to hold consultations and establish info exchange mechanism.”

What is surprising to the Russians is that the United States did not install a self-destruct system on the GMD interceptors to prevent the missiles from landing where they should not.

“The fact that it does not have self destruct is surprising,” Kashin said.

“And I am not sure anyone here knew about that.”

Indeed, Lewis flatly stated that the GMD interceptor does not have a self-destruct mechanism while Pollack explained that the weapon is a kinetic kill vehicle with no warhead.

“They're lightweight, hit-to-kill systems that don't involve any explosives.”

The question that remains, of course, is even if there was a consultative body set up between the United States and Russia, would there be enough time to use such a mechanism?

According to Lewis, the answer is probably not.

“The timeline for a missile defense intercept is so tight—just a few minutes—that the president probably won’t even know about an intercept until after it happens,” Lewis wrote.