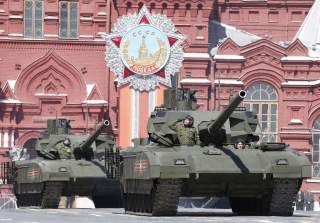 The T-14 Armata, Russia’s next-generation tank, is finally nearing readiness. However, information on recent development has been scarce. A recent interview in February 2018 with Vyacheslav Khalitov, the deputy director of Uralvagonzavod (UVZ), has shed some light on what progress the Armata has made since its last public display. It also gave some information on the Koalitsiya-SV self-propelled howitzer (SPH) project, and the Armata’s derivative T-15 Heavy Infantry Fighting Vehicle (HIFV) project.

The primary theme that the interview seems to push is that UVZ is getting ready for the serial production of one hundred Armatas, ordered in 2016. A specific year was not given for serial production, but rather it is described as planned to take place in “coming years” (ближайшие годы). The deputy director stated that UVZ was modernizing its facilities in preparation for serial production of the Armata. Other recent news supports this, such as the opening of a new automated assembly line for tank treads. Currently, this line will primarily be used to create new tracks for T-90s and BMPTs. It is expected to produce tracks for the Armata and the new Koalitsiya-SV SPH in the future. The elimination of human labor on the production line is reflective of the overall design philosophy of the Armata: the elimination of the human element and reliance on sensors and machines.

Drawing on that theme, the interview with UVZ also touched on the development of the robot variant of the Armata. No prototypes or actual physical work was being completed—only theoretical and experimental work to determine whether such a product was feasible. The deputy director expressed optimism in the advances of robotic technology, both in the pure military field and in dual-use applications. He stated that people should seriously consider robots as a new kind of weapons.

As for the manned Armata, it was stated that it was still undergoing preliminary testing (предварительные испытания), despite being first showcased two years ago. Also, in recent private demonstrations for Russian Ministry of Defense officials, the latest Armatas demonstrated their ability to effectively engage targets. President Vladimir Putin was also reported to have climbed inside one in March 2018, to see the progress with his own eyes. For the Armata’s T-15 HIFV project, it was stated that development continued within the same framework as the T-14 Armata, so it was on the same level of technical maturity. While this project has not yet received any orders, the Russian MoD originally requested UVZ to develop a vehicle of this type, so UVZ expects them to order it further into development.

Other information provided regarding the upcoming Koalitsiya-SV project, which consists of three vehicles, a tracked self-propelled howitzer, a wheeled self-propelled howitzer and an ammunition-resupply vehicle. The resupply vehicle was said to have already passed state tests. As for the howitzers, it was stated that UVZ was preparing prototypes to be tested by the Ministry of Defense for acceptance or further revision, and that information regarding this and pilot program was classified.

Overall, UVZ seems to be making decent progress on the T-14 Armata. In gearing up for serial production, UVZ is improving its ability to deliver on current contracts by modernizing and automating its production facilities. The author estimates that serial Armata production will occur sometime in 2019. Of note is that no more orders for the Armata or other Armata family vehicles other than the original one hundred placed in 2016 have taken place, while orders for more modernization kits and other vehicles like the BMPT were placed in 2017. UVZ said they were creating the “technical reserve” to create another fourth-generation tank in the interview, so we might see yet another new tank out of Russia in the future.