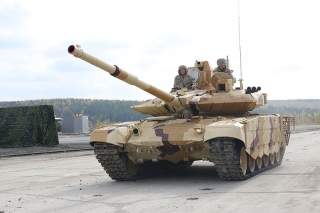 A military exercise with origins in the former Soviet Union is now exacerbating tensions with NATO, particularly those members facing the Baltic Sea. Conducted four years ago, Zapad (“West”) 2013 was deeply illustrative not only of Russia’s strategic goals, but of how it planned to fight future wars, particularly the annexation of Crimea. The biennial exercise is scheduled once again for this year, prompting the Baltic countries to ask NATO and the United States for increased military assistance.

The Zapad ’81 military exercises were the largest ever held by the Soviet Union. Strategic/operational in scope, Zapad 1981 was held over a period of eight days and involved between 100,000 and 150,000 Soviet and other Warsaw Pact military personnel. The exercises tested a number of new weapons systems, including the SS-20 intermediate-range ballistic missile (later banned by the INF Treaty). Planners envisioned a scheming NATO preparing to invade the Warsaw Pact, but preparations by Brussels were detected and successfully countered by Moscow. The exercise also saw a counterattack into Germany and a preemptive use of tactical nuclear weapons against the “Western forces,” which resulted in the loss of a quarter million NATO personnel.

The decline of the Soviet Union and the difficult years experienced by the former republics meant large-scale exercises were infrequent at best. Zapad exercises were held a handful of times from 1981 to 2013, but 2013 saw the largest exercise in decades. Like the original exercise, Zapad 2013 tested new equipment and new concepts, and proved that the Russian military had finally come out of the decrepit, underfunded state in which it found itself in the 1990s and early 2000s.

Zapad 2013 was presented as a limited exercise of approximately twelve thousand troops, taking place both in Belarus and Russia. The exercises, carried out by Russia’s Western Military District from September 20–26, were in part oriented around the Baltic region, with elements taking place in the Kaliningrad Oblast and the adjacent Baltic Sea. Russian and Belarusian forces would, among other things, practice joint operations between the different arms of the armed forces, test the new concept of the army brigade as an independent unit of action, and test the Air Force and Air Defense Force’s ability to secure friendly airspace.

The Jamestown Foundation described the war scenario for Zapad 2013, an unusual one in which “Baltic terrorists” with amphibious craft, attack helicopters, and Su-25 and Su-30 attack and strike aircraft attacked Belarus and then fled into the cities, forcing the defenders to engage in urban warfare. The “Baltic terrorists” were a thinly veiled reference to NATO.

The exercise was particularly unsettling to Russia’s neighbors. The use of Zubr transport hovercraft to land Russian and Belarusian Marines was particularly ominous to NATO’s Baltic members, including Estonia, Latvia and Lithuania, all of which had joined NATO against Russia’s opposition and which have periodically been the victim of Russian military intimidation. The Zubr hovercraft can carry up to a company’s worth of Russian armored vehicles—ten in all, or up to 366 troops—and land them on coastlines up to three hundred miles away.

While Zapad 2013 was framed as a defense-oriented exercise, various tactical aspects lent themselves to Russia’s subsequent interventions both in Crimea and Syria. It was during the exercise that Western observers noted Russia’s use of unmanned aerial vehicles to locate targets for artillery and conduct bomb-damage assessment—something that would be seen the following year in the war in Ukraine. The exercises also saw the use tactical missiles in the deep-strike role, which Russia has practiced in Syria, and counterguerrilla operations in urban environments.

Held every two years, another Zapad is due later this year, in September. Tentatively dubbed Zapad 2017, little is known of the exercise at this early stage, except that it will undoubtedly be a window into new Russian tactical concepts and innovations, including lessons learned in the conflict in Syria. The exercise will also function to once again rattle the NATO Baltic countries and Scandinavia, reminding them that Russia considers their neighborhood its own backyard.