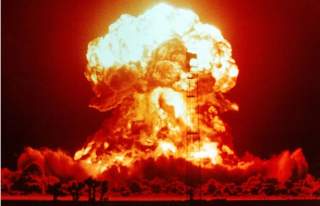 These days, when Australians turn to thinking about worrying nuclear weapons issues, they tend to look first to the alarming pace of North Korea’s nuclear and missile programs, second to the growing role of nuclear coercion in Russian strategic policy, third to the challenges unfolding in the current Asian nuclear order, and perhaps fourth to the prospects for longer-term nuclear proliferation within the Middle East. But there’s another worry that ought to be occupying more of our attention—the concept of the great-power nuclear balance in the early 21st century.

It’s been over 25 years since Australians paid much attention to that balance. Not since the days of the Cold War have Australian strategic thinkers obsessed about what we might call the granularity of nuclear balancing issues—such as comparative basing modes, throw-weights and modernization rates. In the meantime, we’ve tended to focus upon other nuclear relationships, typically ones characterized by highly-asymmetric nuclear forces. And that means we’ve tended to forget some important lessons from the Cold War era: that nuclear balances are artifacts of human endeavor, not naturally-occurring phenomena; that the balances aren’t static, but shift over time; that the ‘shape’ of an arsenal is just as important as its size (more on that below); and that US allies feel anxious when the US nuclear arsenal looks inferior to those of its authoritarian great-power competitors.

I suspect we’re about to relearn some of those lessons, as we enter a new phase of the great-power nuclear relationship. Despite the recent flurry of media interest in the possibility of a new US–Russian nuclear ‘arms race’, the new phase is unlikely to be an actual race. More likely is that we’re entering an era of competitive modernization between the US and Russia. I don’t use that description to trivialize what’s occurring: this is still a competition that goes to the core of the future nuclear balance between the two powers.

Stable nuclear balances are those in which neither side feels pressure to fire first. And that typically goes to the shape of an arsenal, not simply its size. Take the case of an arms control agreement between two superpowers to limit their countable nuclear warheads to 1,000. (I use the adjective ‘countable’, because warhead numbers typically depend upon agreed counting rules for specific delivery vehicles.) Country A chooses to deploy 300 single-warhead ICBMs in fixed silos, 600 warheads on multiple-warhead (MIRVed) missiles at sea, and 100 warheads on its long-range strategic bombers. Country B chooses to build 100 ICBMs, each with 10 warheads, in fixed silos.

Blind Freddy can see that the different shapes of the two arsenals make for a highly destabilizing balance. Country B must fire first—for the simple reason that its entire arsenal is vulnerable to an attack using only 200 warheads (2 warheads aimed at each of 100 fixed silos)—and both sides know it.

Ok, let’s look at another scenario. Country A still has the arsenal described above. Country B deploys only 50 of its 10-warhead heavy ICBMs, but otherwise begins to mimic Country A, by deploying 400 warheads on its submarine force and allocating 100 warheads to its bombers. Hands up anyone who thinks that’s better. Well, it is, but the improvement’s marginal. Country B’s retained a large first-strike force, but built a more secure second-strike force to backstop it. With that force structure, Country B’s still going to fire first. This second scenario is one that’s relatively familiar to us because, by and large, it represents the current US–Russian balance.

In that second scenario, the problem of the heavy, vulnerable ICBM still lies at the heart of the balancing problem. Stability can be improved only by Country B substantially lowering the MIRV-ing rates—and throw-weights—of its ICBMs.

Now let’s put the problem into the modernization context. The US is currently engaged in a debate about modernization of its ICBM force. The force has been de-MIRVed over the years, so that all missiles now carry only one warhead. Yes, it’s vulnerable to attack because the missiles are deployed in fixed silos. But any attack would ‘cost’ the aggressor, because it would require two warheads to destroy a silo containing only one warhead. Moreover, the aggressor would have to target the US homeland—a big and escalatory step in any nuclear conflict.

Meanwhile, Russia’s already modernizing its force and, relevant to the discussion above, replacing (rather than retiring) its current heavy ICBM, the 10-warhead SS-18. Its new heavy ICBM, the RS-28, was unveiled in October 2016. While still in development—it mightn’t be deployed until 2018—it’s said to be capable of carrying 10 larger warheads, or 16 smaller ones, or some combination of warheads and penetration aids to enable a successful attack through improving missile defenses. Too big to hide, too heavy to move and too important for an opponent to ignore, the RS-28’s going to be a major factor locking us into the second scenario sketched above—one in which Russia continues to deploy a substantial fraction of its strategic arsenal on destabilizing heavy ICBMs—regardless of what the new US administration decides.