Why 'Small Arms' Might Just Be the Ultimate Weapon of War 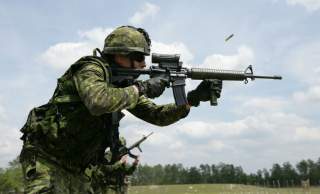 A quick look around the world reminds you that small arms are the tools of choice for those wishing to propagate violence. Indeed, from France’s war in Mali to the conflict in Ukraine to the Islamic State’s reign of terror to Libya’s disintegration, small arms are the fuel adding to the world’s burning fire. It is was therefore important to pick up the latest Small Arms Survey release, the yearly report that discusses how small arms—“revolvers and self-loading pistols, rifles and carbines, sub-machine guns, assault rifles, and light machine guns”—impact global violence. The entire report is worth reading, as the chapters serve as in-depth case studies on how these weapons impact different aspects of worldwide conflict ranging from poaching in Africa or the rise of insurgencies in northern Mali. Yet the report has a few key points of interest to those interested in national security, international violence, or the defense industry.

From 2001 to 2011, “the small arms trade almost doubled”—and the value is only increasing. In 2012, around $5 billion of small arms were transferred, which is the highest value for the global since 2001. And, as expected, the United States leads the pack in this trade, both exporting and importing small arms more so than any other country. Yet, “none of the largest exporters experienced a decrease in their reported exports between 2001 and 2012, except for Belgium.” Clearly, it’s a good time to be selling small arms. Of course, it’s important to note that this is the trade that has been accounted for. Who knows how much more staggering these numbers would be if it were possible to factor in the illicit small arms trade?
New opportunities are presenting themselves:

Global trends are causing some rethinks in how global security might work. Yet, these same trends still present growing conventional opportunities for small arms manufacturers. As the report mentions, increased urbanization—which leads to increased resource extraction—brings with it the need for “the effort to control and secure resources” that ‘can attract a variety of armed actors, including security forces and predatory groups.” Security is scarce around these areas. Contractors should consider this a growing opportunity. Despite the proliferation of weapons, the level of security in growing areas seems to be decreasing. More importantly, the chance for an escalation of conflict will likely increase in these zones as people will use small arms for nefarious purposes.

Elias Groll at Foreign Policy said it best: “The weapons supplied to friendly client states today have a nasty habit of reappearing in the hands of unexpected enemies ten, twenty, or thirty years from now.” Indeed, as Groll also notes, small arms sent by the United States intended for the Kurdish ended up in Islamic State possession. Old Soviet Union weaponry has proliferated around the world after its fall and can now be seen in Balkan states, Mali, Libya, and elsewhere. For the arms industry, there may be some opportunity in making small arms that only work for their intended receiver. Some strides have already been made in this department, but more could be done.

Alex Ward is an assistant director at the Atlantic Council’s Brent Scowcroft Center on International Security where this piece first appeared.