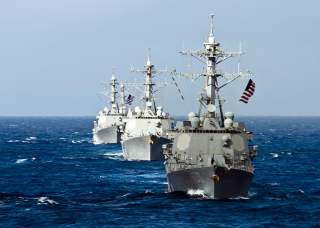 The United States Navy will likely be in good hands under the incoming Trump Administration.

Outgoing Rep. J. Randy Forbes (R-VA)—chairman of the House Armed Services Committee’s Seapower and Projection Forces Subcommittee—is one of the leading candidates to become the new Secretary of the Navy (SecNav) according to multiple sources.

Forbes is universally respected within Washington’s national security circles as a staunch advocate of American naval power. Even those conservative stalwarts who vehemently oppose president-elect Donald Trump’s candidacy were exuberant at the possibility that Forbes would become Secretary of the Navy. “I think he would be the perfect choice,” said naval expert Bryan McGrath—who along with several other well-known conservative foreign policy experts—led the “Never Trump” movement.

Earlier this summer, I had spoken to Jerry Hendrix, a Navy veteran and director of the Defense Strategies and Assessments Program at the Center for a New American Security, who suggested that Forbes would be an excellent choice to lead the Navy.

“He would be a superb SecNav in that he, perhaps more than any other member of the legislative branch, has made a concentrated effort to understand the naval services and the issues that currently confront them,” Hendrix said. “Also, even on the issues where we have disagreed, Forbes has welcomed me into his office for a real and substantive discussion to fully explore the issue. Rarely have I found someone so professional and proper in their deliberations. He would be a great SecNav.”

Sources close to the Trump team suggested that Forbes would be a natural fit within the new administration. “Ask any Republican defense expert--from any wing of the party--who should be SecNav and Randy Forbes will be the first name mentioned. He has a reputation as the most consequential lawmaker on Navy issues since Carl Vinson in the 1930s,” said a source who has advised the Trump team on national security issues. “When he ran for reelection, he was endorsed by every living Republican Navy Secretary. The Trump Navy plan echoes almost all of Forbes' key agenda items as Seapower Chairman in the House, and he is the perfect person to execute that vision as Navy Secretary."

Forbes and Trump share similar visions when it comes to the Navy. Indeed, many of Trump’s ideas about Aegis ballistic missile defense ships and calls for a 350-ship Navy are drawn directly from the Forbes camp. As such, one source close to the Trump camp said that his personal belief is that Forbes is the best choice to become Secretary of the Navy. “I also, personally, think he should be,” one source said.

The hope among Republican national security professionals is that if Forbes—assuming he would accept a nomination to become SecNav—is that he would encourage other conservatives to accept senior level position in the new administration. “It could also encourage other serious foreign policy and defense folks to come out of the woodwork and do what they can to foster good governance,” a senior Republican Congressional staffer told me.