Why Some of the World's Most Powerful Militaries Love Body Armor 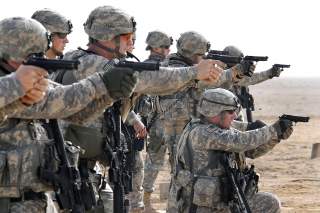 While body armor systems have been around almost as long as firearms have, systems able to reliably stop rifle rounds have only been around in the last fifty years (or less!). These systems use a variety of designs and technologies to accomplish the goal of protecting the soldier—and still vary considerably among nations and even branches of the military within a nation. The technology is also rapidly progressing, with stronger and lighter armor constantly being developed.

The core of most modern military body armor is a plate that is meant to stop a rifle bullet. While older systems such as flak vests (which are still the only standard issue system) or police vests might consist solely of softer armor, modern systems like the Ranger Body Armor (RBA) were based around ballistic plates. In American systems, these plates are called SAPI (Small Arms Protective Insert). Later generations of these plates, currently in use, are called ESAPI and XSAPI. High-strength ceramics are used to make these plates.

Conversely, Soviet (now Russian) body armor tends to be based around metal plates made of steel or titanium. The standard issue 6B23 and its predecessor, the 6B12, both utilize steel plates in Russian military service—although titanium and ceramic plates are also available. Earlier Russian systems, such as the 6B2 and 6B3, used either titanium or ceramic plates. The newer 6B43 and 6B45 vests, which are set to replace the 6B23, use ceramic plates. The kind of plates used in Soviet and Russian vests are not standardized, and tend to vary in size, shape, material, and number from vest to vest. For example, the 6B13 has two smaller rear plates that allow the user to bend over, as opposed to a single rear plate in the 6B43 or American systems. This is partially due to vests being produced for specific purposes with different protection levels—but this concept appears to be on the way out with the modular 6B43 and 6B45 vests.

Steel plates have seen a resurgence on the American civilian market due to their low cost. The advantage of steel and other metal plates is that they can take multiple hits—where ceramic plates tend to fail. Steel plates are not prone to cracking when dropped on an edge unlike ceramic plates. The primary disadvantage of metal plates is that bullets will spall after impact, breaking apart into shrapnel. This shrapnel can injure the wearer, potentially killing them. They also weigh significantly more than ceramic plates for the same level of protection.

Recently, a new technology has emerged attempting to produce even lighter body armor: Ultra-High Molecular Weight Polyethylene (UHMWPE). The primary driver of this technology is DSM Dyneema, a Dutch company that is the primary manufacturer of the material. UHMWPE is primarily intended to replace Kevlar in soft armor applications, but it can also be used to create plates that are almost half the weight of traditional ceramic ones—but far more durable. There is no spall hazard, unlike metal plates. However, the technology is not yet mature, and the strongest UHMWPE plates are not as strong as the newest ceramic plates. UHMWPE technology in “hard” applications is battle proven, as it is used to create the Ops-Core FAST helmets used by the majority of special operators around the world.

While the progression of plate technology is relatively straightforward, the actual systems that hold the plates have seen significant evolution. The first-gen “modern” systems—such as the American Interceptor Body Armor, British Osprey and Russian 6B12—focus on wide protection, holding their armored plates above Kevlar or aramid sheets that cover unprotected areas from pistol and shrapnel threats.

This has changed recently, as operational experience in Iraq and Afghanistan led special operations forces to prefer lighter vests that gave higher mobility. These vests tended not to be standard issue, but rather unit purchases. They often only held rifle plates, without additional soft armor coverage.

The U.S. Army is also moving in this direction, aiming to acquire the Soldier Plate Carrier System (SPCS) body armor system. SPCS is lighter and covers less than the previous Improved Outer Tactical Vest. The next-gen Modular Scalable Vest (MSV) continues the trend, also being lighter and plates-only in its basic forms. The Army wants to retain the ability to “upgrade” to heavier, more protected vests, as the MSV is scalable with additional armor modules. It also incorporates technologies from civilian vests, such as the use of laser cut panels instead of the traditional rows of nylon to attach MOLLE accessories.

European armies appear to be largely following the same trend, with modular systems with a minimalist base vest replacing large aramid vests with plate pockets. The Finnish Defense Forces are ahead of the game, with the new Suojaliivi M10 modular plate carrier being their international mission standard issue body armor system, replacing the older M05 system. In the Bundeswehr, the standard issue vest is the modular IdZ Infanterist Modifiziert, which has both SK4 plates and SK1 soft body armor. However, in special units—such as airborne recon—minimalist plate carriers like Lindnerhofare’s are often preferred.

The Russian 6B43 and 6B45 are more old school, retaining soft armor backers and protection around the neck and other areas. However, they too are lighter and cover less than earlier generation systems, ditching the standard full gut protection offered by the 6B13 and 6B23 in favor of a removable flap. Like the MSV, the 6B45 is scalable and modular in its protection levels.

It’s hard to say how the new minimalistic vests might perform in a conventional conflict. The new lighter vests were borne out of operational need in asymmetric environments, as wearing a heavy vest makes long patrols over rough terrain in Afghanistan difficult. In a more artillery heavy environment, more soft armor fragmentation protection could be necessary. Notably, Ukrainian soldiers and militia use older-school designs, complete with Kevlar neck protectors and more gut protection to protect against artillery attacks. Whether this is borne out of budget or protection concerns is not clear.