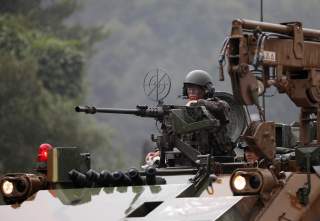 It has been reported that Seoul may be looking into reviving its own nuclear program as Pyongyang has made no bones about the possibility of nuking the United States and its allies after it detonated a hydrogen bomb in September.

If South Korea is able to come up with its own H-bombs, then the security implications for China would be far more complex than the controversial installation of the US-supplied Terminal High Altitude Area Defense (THAAD) system, Chinese military commentators have warned, pointing out that northern and northeastern China, including Beijing, might be well within the range of South Korean missiles equipped with nuclear warheads.

They say Beijing may still have peace of mind even with a nuclear-armed North Korea on its doorstep, as Pyongyang remains as its ideological ally and semi-vassal state, but apparently that would not be the case if Seoul pursued a nuclear-weapons program.

Seoul’s dalliance with the idea of having indigenous nuclear weapons has never subsided throughout the decades, despite Washington’s repeated dissuasion.

The Pentagon brought Seoul under its own nuclear umbrella in the thick of the Cold War when the Korean Peninsula was at the forefront of an arms race between Washington and Moscow as well as fearing an ambush by Mao Zedong’s China.

In January 1958, the first nuclear weapons were deployed to South Korea and remained there until late 1991, after incessant lobbying by Seoul for a vital security guarantee.

Since the pullout, Washington has sought to reassure Seoul and signal to Pyongyang that the nuclear umbrella is intact. Despite the absence of nuclear weapons on the ground, the US military has a long reach across the region, including from ballistic missiles on board submarines deployed in the Pacific Ocean.

Still, South Korea decided to press ahead with developing its own atomic and thermonuclear weaponry as early as the mid-1970s, when the prospect of solo defense against the North and two other Communist regimes, China and the USSR, made Seoul jittery.

This was against the backdrop of a fierce debate on troop withdrawal and strategic retreat in the US, after its setbacks in the Vietnam War.

Washington responded with a categorical veto of nukes in South Korea, together with more security pledges to mollify its East Asian ally.

A 1978 deal between Seoul and Paris on nuclear equipment was subsequently called off, as was the Park Chung-hee administration’s roadmap from nuclear power plants to H-bombs.

Recently there have been calls for Washington to consider “dual key” nuclear-weapons sharing to save Seoul and Tokyo the trouble of developing their own atomic arsenals.

“This is not a choice but a necessity, given that [Japan] possesses little know-how regarding practical details in possession, security, maintenance, and procedures involving nuclear warheads,” Masahiro Matsumura, a professor of international politics and national security at St Andrew’s University in Osaka, told Asia Times early this month.

But other experts including Chinese news commentator Hou Zhijian argue that South Korea faces “zero” technical hurdles for building its own nuclear arms.

The key issue here is whether South Korea could get hold of enough enriched uranium and if Washington would ultimately give its go-ahead, but it seems that Pyongyang’s defiant nuclear buildup has been giving Seoul all the justification it needs to pursue the matter.