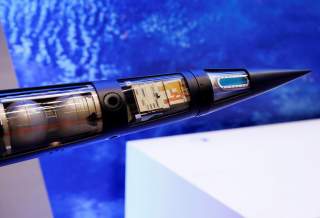 Washington has deployed the THAAD to the Korean peninsula to deter North Korea, which has stepped up testing of its ballistic missiles. The THAAD is designed as a theatre missile defense system but has a limited capability to defeat even intercontinental ballistic missile in the terminal phase of flight.

“This most recent interception of a Medium Range Ballistic Missile, like the previous one against an Intermediate Range Ballistic Missile, adds to the confidence I have in the THAAD system deployed to Seongju to defeat the North Korean threats against the Republic of Korea,” Gen. Vincent K. Brooks, Commander for United Nations Command, Combined Forces Command and U.S. Forces Korea, said in a statement.

“After this recent interception, especially given that this is the 15th or 16th successful live interception by THAAD, I do not know why anyone would doubt that it is capable of doing what we intended for it to do by deploying it here to Korea -- that is, defeat incoming north Korean ballistic missiles threatening the Republic.”

While the United States has discussed military options to counter Pyongyang’s nuclear and ballistic missile programs, realistically the only option is to harden South Korean and Japanese defenses.

The best and most realistic option is to build up allied air defenses in the region.

Indeed, despite the earlier U.S. insistence that it will not tolerate a nuclear-armed North Korea that also possesses ICBMs, Washington seems to be backing off seeking a regime change in Pyongyang.

Nonetheless, it is very unlikely that North Korea will accept any security guarantees from the United States in exchange for giving up its weapons—not after Washington overthrew the Libyan government in 2011. Essentially, North Korea has made the simple realist calculus that a weapon that might deter the United States and preserve the regime trumps any economic or diplomatic benefit—such as a security guarantee.