Why Is Sweden Destroying 96 Powerful Fighter Jets That Could Deter Russia? 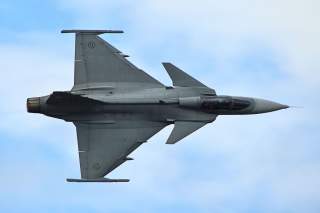 Gripen C/D is an advanced fighter jet with attack and surveillance capabilities, which unlike its Gripen predecessors is also compatible with NATO standards and thus more easily exportable. SAAB has sold or leased the plane not only to the Swedish government but to South Africa, Hungary, Thailand, the Czech Republic and even to the United Kingdom, which uses the plane for pilot training.

But in 2012, the Swedish parliament voted to place another order, this time for sixty new Gripen E aircraft, to be manufactured with immediate effect. “The government’s order was connected to likely sales to Brazil and Switzerland,” Swedish defense analyst Robert Dalsjö told me. “Because other governments were likely to buy it as well, the idea was that the Swedish government would get the planes more cheaply than it otherwise would.”

The Gripen E is not only larger than the C/D but is also equipped with state-of-the-art radar technology and electronic warfare equipment: important attributes in a country now having to beef up its defense against Russia. Even though it had yet to receive its final C/D delivery, the center-right government of Fredrik Reinfeldt — which had previously made large defense cuts — placed the order for sixty planes. They will be delivered between 2019 and 2026. In addition to boosting the Swedish Air Force, the order was vital to SAAB, which employs some fourteen thousand people.  For the past five years Sweden’s defense spending has hovered at a very low 1.1 percent of GDP, compared to 2.6 percent in 1990-1991.

Reinfeldt’s predicament points to a conundrum facing politicians in almost any country with a large defense industry: the home government has a special responsibility in helping its defense companies succeed. “You always have to see a procurement like Gripen E in Sweden in connection with the chances of exporting the product,” said Dr. Hilmar Linnenkamp, a former deputy director of the European Defence Agency who now serves as an advisor at the Stiftung Wissenschaft und Politik, a Berlin think tank. “If the home government doesn’t buy the product, it’s seen as poor testimony. Home governments serve as reference customers.”

Initially, the Swedish government thought it had found a Solomonic solution that would allow it to buy the new planes – thus helping both SAAB and the Swedish Air Force – while not unduly burdening the taxpayer and the Swedish Armed Forces, from whose overall budget the funds for the Gripen E planes would be taken. The plan was that SAAB would recycle most of the C/D planes, essentially upgrading them.

By now, that plan has shrunk to recycling just a few parts from sixty of the planes. The government will make some savings, but precisely because parts from the C/D planes are required to make the new planes, the planes will have to be retired early and chopped up, leaving Sweden with a SEK 16.4 billion ($1.8 billion) expense and sixty ultra-new planes instead of 96 somewhat older ones.

Not surprisingly, the government’s plans have stirred up a sharp debate about the wisdom of buying the new planes – or rather, of retiring the 96 perfectly useable C/D planes to use them for parts at a time when Sweden wants to be seen as strengthening its defense. “People are calling the C/D planes old, but they’re actually quite young and have a lot left to give,” said Allan Widman, the chairman of the parliament’s defense committee, who opposes dismantling the planes. “Going from nearly one hundred planes to sixty planes in a worsening security situation is hard to defend.” (Reinfeldt’s government has since been succeeded by social democratic-green coalition, which has thus inherited the conundrum.) Indeed, the planes have an average age of seven years, and even though they have a flying life of or around thirty years or eight thousand hours, they have only flown an average of 1,100 hours. The current average age of the US-made F-16 aircraft is 22.43 years.

Another dilemma facing Sweden’s armed forces is this: which capabilities does the air force in fact need in order to be credible? Gripen E is a spectacular machine that could hold its own against PAK-FA, a Russian plane currently in the prototype phase. But since the Russian air force doesn’t yet own this state-of-the art plane, Dalsjö argues that Sweden could fly its Gripen C/D planes a bit longer to great effect. “And even when the Russians get the PAK-FAs, there are a number of things the C/D planes could do that don’t involve direct duels with top-of-the-line Russians fighters,” he told me. “They could, for example, conduct strikes against ground or naval targets. Or we could sell or lease them to other countries.” Indeed, this spring the Swedish Defence Materiel Administration (FMV) upgraded the Air Force’s Gripen C/D fleet.

One way out of the conundrum would indeed be to lease or sell the C/D planes to countries interested in them, such as Indonesia, the Philippines, Portugal, Slovakia and Botswana. The government had, however, already committed to handing the planes over to SAAB for recycling of the selected parts. It would also be in SAAB’s and thus Sweden’s interest that such countries instead buy new C/D planes from SAAB.

But Widman – whose fellow center-right politicians have made an about-face and support increased defense spending – argues that Sweden should at least keep some of the old planes. Last month his committee passed a resolution that obliges the government to inform parliament if it wants to sell defense equipment currently in use by the Swedish Armed Forces to other countries. For the resolution to be binding, it has to be passed by parliament. “OK, there’s some cost associated with keeping some of the C/D planes, but the armed forces’ hangars and repair shops are set up for a fleet of 100 planes, so the cost for keeping around 40 of the C/D planes would not be very high,” Widman told me. Jan Hyllander, the Swedish Ministry of Defence’s deputy director-general, did not respond to a request for comment. A key decision-maker in Gripen E procurement declined to comment.

There is, of course, another dilemma: how large should an air force be in order to be credible against an adversary such as Russia? Should it have sixty planes? One hundred? Two hundred? And of which kind? “160 may not be enough, but it’s more enough than sixty,” Widman said. But with the Gripen E procurement signed and sealed, and no elegant compromise in sight, it looks like the 96 Gripen C/D stalwarts will be chopped up after all. The first ten planes will be taken out of service next year.