Why the Air Force Must Adopt the Navy's Lethal New Weapon 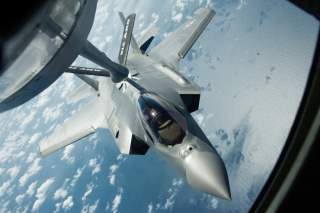 While the U.S. Navy is well on its way to fielding its Naval Integrated Fire Control—Counter Air (NIFC-CA) battle network onboard its carriers, the U.S. Air Force does not seem to have made much progress in developing one. But if the Navy is already fielding a successful system that works, there is no reason for the Air Force to reinvent the wheel and develop its own competing battle network. Instead, the Pentagon should consider directing the Air Force to join the Navy program.

While most of the individual warfighting components of NIFC-CA have been in the fleet for years, the key element of the new battle network is that it allows every ship and aircraft—and potentially even submarines—in the strike group to share a common picture. Every single unit is a sensor that contributes to the overall picture of the battlespace, but moreover, every single unit can also be a shooter. That means a Boeing F/A-18E/F Super Hornet could engage a target that is being detected and tracked by an Aegis cruiser or even an EA-18G Growler without turning on its own radar at extended ranges. By the same token, an Aegis cruiser could engage an over-the-horizon target detected by an airborne sensor using a track provided via NIFC-CA. The key to it all is the E-2D, which is the central node of the entire NIFC-CA construct.

But while the Navy is moving ahead with NIFC-CA, the U.S. Air Force seems to have failed to develop a comparable battle network—or “combat cloud” as former Air Force intelligence chief Lt. Gen. Dave Deptula—now dean of the Air Force Association’s Mitchell Institute—often describes it. The Air Force seems to be developing the individual pieces of a large and coherent battle network with new datalinks that could connect its stealthy fifth-generation fighters to their fourth-generation counterparts and other assets, but the service does not seem to have an overarching, coherent and coordinated effort to bring a “NIFC-CA like” construct into being. The irony, of course, is that the idea for such a battle network originated with the Air Force’s tactical gurus at its Warfare Center in Nellis Air Force Base, Nev.

While some Air Force officials have complained that the Navy did not coordinate their NIFC-CA efforts with them, naval officials say that the air service ignored their repeated pleas for cooperation. Navy officials pointed out that they had even demonstrated the potential of the NIFC-CA concept to their Air Force counterparts at a Joint Expeditionary Force Experiment at Nellis AFB in 2010. During that JFEX demonstration, the Navy paired its E-2D Advanced Hawkeye with an Air Force E-3 Sentry AWACS along with a number of Air Force fighters.

If one accepts the premise that the Western Pacific will take center stage in the future, then the Air Force and Navy are going to have to closely cooperate to fight in those highly contested areas. That necessarily means that the two services will have to coordinate their forces very closely. That further implies that Air Force and Naval assets should be able to work together completely seamlessly. The might lead one to conclude that instead of developing a completely separate and duplicative “combat cloud,” the Defense Department should direct the Air Force to join the NIFC-CA effort.

There should be no reason that an Air Force F-15C shouldn’t be able to shoot using a track generated by an Aegis cruiser. Or, conversely, there should be no reason a DDG-51 destroyer couldn’t be able to use data from an Air Force platform to guide SM-6 missiles.  Indeed, there should be little technical difficulty in retrofitting the Air Force’s AWACS and fourth-generation fighters to be compatible with NIFC-CA, but the fifth-generation fighters like the F-22 and F-35 are a bit more complicated. According to Navy officials, the sea service and the Marine Corps are already working on advanced datalinks to make sure that the F-35 can tie into NIFC-CA without compromising its position. Certainly if the Army can make sure its JLENS radar is compatible with NIFC-CA, the Air Force has no excuse to avoid cooperation.