Why Is the Air Force Using Jet-Flying Mercenaries? 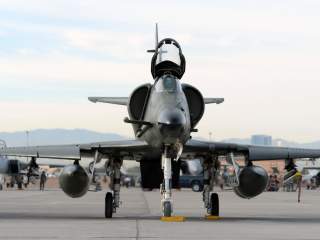 The U.S. Air Force’s elite Weapons School at Nellis Air Force Base, Nevada, has started using contractors flying privately-owned combat aircraft to help train the service’s tactical gurus. The contractors have been hired for what amounts to a trial run. If it goes well, there are likely to be further contracts.

The Air Force Warfare Center was forced to hire the mercenaries because budget cuts have forced the service to disband one of its two Nellis-based Aggressor Squadrons. The 65th Aggressor Squadron—which was recently inactivated—flew Boeing F-15C Eagle air superiority fighters to ‘replicate’ advanced ‘Red Air’ warplanes like Russian-made Su-30 Flanker. The idea of using contractors to train U.S. Air Force fighter squadrons had first been floated late in 2014—when Air Force officials described their ‘Red Air’ situation as a ‘mess.’

“When we closed the 65th Aggressors we recognized the need for adversaries was still as great, if not more so,” said Lt. Col. Michael Shepherd, deputy commander of the 57th Adversary Tactics Group. “So while we still have that great need to produce adversary aircraft, we simply don't have the Air Force assets. Draken has been contracted because they can do it cheaper and because they can still represent adversary tactics.”

Because of the Air Force’s dire shortage of available training assets—both dedicated aggressors and regular squadrons tasked with the Red Air mission on an ad hoc basis—the service has hired Draken International to provide pilots and aircraft.

“Draken International has been asked to come in as contracted adversaries,” Shepherd said. “They fly the A-4 and they have won a contract that provides Nellis with contract adversary air or adversary support. So they are ultimately helping us supplement our red air capabilities so that we can present better pictures and presentations to the U.S. Air Force Weapons School, Red Flag and other test agencies here on base."

While Draken has been contracted to support the Air Force’s storied Weapon School and its fabled Mission Employment Phase—which are the single most complex and difficult large force exercises the service conducts—the mercenaries have not been hired for Red Flag or Green Flag war games.

“We are supporting the Weapons School. We hope and think that in the future we will be supporting Red Flag and we've talked casually about that. It's going to be determined after the trial period,” said Terry Scott, director of Nellis operations for Draken International. He added:

“After the trial period, the 57th ATG commander will make an evaluation on us to determine if we are suitable to support Red Flag sorties. At Draken we feel very strongly that we can do this very effectively and I think the Air Force is going to be very happy with the product were providing to them.”

Draken has completed one contact that ran from November 30, 2015, through December 19, 2015. The company is scheduled to return to Nellis in April to complete the rest of the contract, which runs through June.