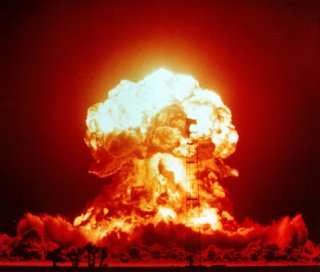 History may one day record that the greatest strategic blunder in history was the failure of U.S. leaders to take the possibility of nuclear war between America and Russia seriously once the Cold War ended.

Initially, U.S. leaders thought the ideological motivation for East-West nuclear tensions had disappeared with the collapse of communism.  But even after Vladimir Putin began rebuilding Russia's military forces and signaling a desire to regain lost influence, Washington continued to treat the prospect of nuclear conflict as remote.

Successive administrations failed to take any steps toward providing the U.S. with active defense against even a modest Russian attack.  Plans to replace aging deterrent forces were repeatedly deferred, until some portions of the nuclear complex had become decrepit.  And Washington continued to make security commitments in Russia's "near abroad" areas -- countries once satellites or integral parts of the Soviet Union -- as if the likelihood of nuclear conflict was close to zero.

However, the possibility of nuclear war between America and Russia not only still exists, but is probably growing.  And the place where it is most likely to begin is in a future military confrontation over three small Baltic states -- Estonia, Latvia and Lithuania.  Since those nations and several other Eastern European states joined NATO in 2004, the United States has been committed to defending their freedom and territorial integrity under Article V of the North Atlantic Treaty.

Because NATO from its inception was aimed at containing the expansion of a nuclear country -- Russia -- a vital part of the U.S. security commitment to Europe consists of Washington's willingness to use its nuclear arsenal in defense of allies.  The formal name for that strategy is "extended deterrence," and since 2004 it has included the Baltic states.  Simply stated, the United States seeks to deter aggression or blackmail against NATO allies from a nuclear-armed Russia by threatening to use atomic weapons.

The Obama Administration's 2010 Nuclear Posture Review confirmed that extended deterrence remains a pillar of U.S. global strategy.  Although the credibility of extended deterrence ultimately resides in the U.S. strategic "triad" of long-range bombers and missiles, the posture review explicitly stated that the U.S. would preserve the ability to deploy nuclear weapons with suitably equipped tactical fighters in places like Europe.

According to Hans Kristensen of the Federation of American Scientists, the U.S. currently deploys about 200 B61 nuclear gravity bombs in Europe for use by American or allied forces in a future East-West war.  The weapons are receiving life-extension modifications that will allow their use for decades to come, first on F-16 fighters and later on the stealthy F-35 fighter.  Russia also deploys a sizable number of so-called "non-strategic" nuclear weapons in the European theater, although like the U.S. it does not disclose numbers or locations.

While nuclear weapons could potentially be used in any number of future warfighting scenarios, there are multiple reasons to suspect that the greatest danger exists with regard to the three Baltic states.  Here are eight of those reasons.

First, both Washington and Moscow assign high strategic significance to the future disposition of the Baltic states.  From Moscow's perspective, the three states are located close to the centers of Russian political and military power, and therefore are a potential base for devastating attacks.  For instance, the distance between Lithuania's capital of Vilnius and Moscow is less than 500 miles -- a short trip for a supersonic aircraft.  From Washington's perspective, failure to protect the Baltic states from Russian aggression could lead to the unraveling of America's most important alliance.

Second, Washington has been very public about it commitment to the Baltic states.  For instance, in 2014 President Obama stated during a visit to Estonia that defense of the three countries' capitals was "just as important as the defense of Berlin and Paris and London."  That is an extraordinary assertion considering that the population of metropolitan London (about 8 million) is greater than that of all three Baltic states combined (about 6 million), and that the eastern coast of the Baltic Sea is so close to the Russian heartland.

Third, there is a disconnect between the rhetoric that Washington applies to Baltic security and the tactical situation that would likely obtain in a future war.  Russia has massive local superiority in every form of military force, and the topography of the three states presents few obstacles to being quickly overrun.  The RAND Corporation reported earlier this year that in a series of war games, Russian forces were always able to overcome indigenous defenders and reach Baltic capitals within a few days.  The forces of other NATO nations had little time to respond.

Fourth, for all of its talk about reinforcing NATO at the recent alliance summit ("we will defend every ally" President Obama said), there is scant evidence the U.S. is willing to make the kind of commitment of conventional forces needed to blunt a Russian invasion in the Baltic region.  The proposed placement of NATO-led battalions in each state totaling about 1,000 soldiers each is widely described as a "tripwire" defense, meaning it might trigger a bigger alliance response but would not be able to prevent Moscow from reaching its military objectives quickly.

Fifth, any counter-attack by NATO in the Baltics could easily be misconstrued by Moscow as a threat to its core interests, in part because some strikes against attacking forces would occur on Russian territory, and in part because Russia's fragile reconnaissance system would quickly be overwhelmed by the fog of war.  Anthony Barrett of the RAND Corporation has recently produced a worrisome analysis detailing how an East-West conventional conflict along the Russian periphery could escalate to nuclear-weapons use through miscues or misjudgments.

Sixth, both sides in any such conflict would have military doctrine potentially justifying the use of nuclear weapons to prevent defeat.  In the case of Russia, it has stated repeatedly that it needs non-strategic nuclear weapons to cope with the superiority of NATO conventional forces, that it would use such weapons in order to protect its core assets and values, and even that nuclear weapons might sometimes be useful tools for de-escalating a conflict.  Successive U.S. administrations have stressed that nuclear weapons underpin alliance commitments.

Seventh, both sides have non-strategic nuclear weapons in theater ready for quick use if tactical circumstances dictate.  For example, Hans Kristensen noted the presence of several nuclear-capable military systems in the Russian enclave of Kaliningrad located between Lithuania and Poland.  Although the Russians have not disclosed whether nuclear warheads are also located in the district, there is little doubt that hundreds could quickly be deployed to areas around the Baltic states in an escalating conflict.  Nuclear-capable NATO jets could reach the area within hours.

Eighth, new technologies are gradually being incorporated into forces on both sides that could accelerate the pace and confusion of a local conflict.  For instance, the F-35 fighter that will replace F-16s in the tactical nuclear role cannot be tracked by Russian radar.  The integrated air defenses that Russia has deployed in Kaliningrad and elsewhere on its territory could severely impede NATO use of local air space in support of ground forces, and Russian electronic-warfare capabilities could impede coordination of ground maneuvers.

The bottom line is that all the ingredients are present in the eastern Baltic area for an East-West conflict escalating to nuclear weapons use.  Neither side understands what actions might provoke nuclear use by the other, and once war began both sides would likely have a tenuous grasp of what was happening.  The high stakes assigned to the outcome of such a conflict and the ready availability of "non-strategic" nuclear weapons in a context where either side might view their use as strategic in consequences is a prescription for catastrophe.

This situation calls for a reassessment by Washington.  While losing the Baltic states would undoubtedly be a blow to NATO, their location makes them of far greater importance to Russia than America.  It simply makes no sense to tie America's security to countries of such modest importance that are situated in such unpromising tactical circumstances.  If the Obama Administration took the threat of nuclear war more seriously, it would find a way of loosening the commitments it has made.