Why the Fed Needs to Make a Policy Error 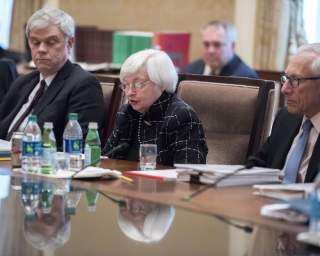 One way or another, the Fed’s current policy path will be remembered as a comedy of errors. But what will matter more than the mistakes is whether or not the Fed maintains its credibility. By so consistently telegraphing interest-rate hikes, the Fed has backed itself into a corner. It may be a policy error to continue raising rates at this point, but backing away from higher rates could spark a crisis of confidence, which would be even worse. The Fed is setting up to commit a policy error, and an error may be the best possible outcome now.

The oddity of the Fed’s current position is the near guarantee that it will make a policy error. With little in the way of inflation and a nascent rebound in wages continuing to lag prior recoveries, the Fed has still committed itself to “normalizing” interest rates. Precious little inflation pressure is appearing, economic growth remains anemic, and the uncertainty surrounding global deflation shocks remains significant.

The Fed has cited the aforementioned as reasons for its slow and gradual approach to the process of tightening policy. Fed presidents frequently reiterate the primacy of data dependency in their policy-determination process, while emphasizing the lack of a preset course for future policy. But the language is typically unidirectional—always focused on what data are needed to justify a rate hike. No one talks about what would constitute evidence for a reversal. And this creates complications for the Fed’s ability to prudently conduct both present and future monetary policy.

The Fed understands there are few, if any, reasons raising that interest rates is imminently necessary. The reasoning to normalize policy is more that “it must be done” than that “it needs to be done.”

The logic as to why the Fed must remain on a tightening path is that it cannot afford to lose credibility. More accurately, it cannot afford to lose credibility in that way. By committing the policy error of misreading the economy, and significantly slowing an economic expansion, the Fed risks less credibility than it would by backtracking on it policy path. The Fed must maintain faith in the execution of its commitments and policies.

A commonly cited reason for the normalization of policy is that it will provide the Fed with room to be accommodative during the next downturn—normalization will restore its ability to use the traditional stimulus measure of managing (lowering) the Fed Funds rate. The fear is that, unless rates can be raised to a level sufficient to give the Fed some firepower, it will be forced to return to unconventional policies.

The curious part about the current campaign to move rates higher is that regardless of how close to “normal” the Fed gets, it will more than likely be forced to go to an unconventional policy. The first step toward maintaining credibility might be to admit that extraordinary accommodation is now normal.

Unconventional policy relies heavily on Fed credibility. Credibility allows the Fed to commit to achieving a certain outcome, and have markets believe it will happen. It keeps markets calm. Whether the policy is post-financial crisis quantitative easing, the manipulating the entirety of the yield curve in the 1940s and 1950s, or even the relatively mundane practice of forward guidance—all rely on markets believing in the Fed’s future conduct. At this point, the Fed funds rate will rise to a level sufficient to combat a slowdown. Unconventional policy is likely to be undertaken to combat the next several downturns and become a far more regularly used tool.

Since the 1970’s, the Fed has tightened around 3.5 to 4 percent per tightening cycle, but loosened policy by more than 5 percent subsequently. With a current mid-point of only 0.37 percent for the Fed funds rate, in order to gain enough room to lower rates sufficiently before reaching zero again, the Fed will be forced to tighten more than it currently projects.

If, on the other hand, the Fed continues to back away from its stated objectives, gaining back the trust of the markets will be difficult. In early 2016, the Fed slowly backtracked from its previous tightening path. Much of this was likely due to the strength of the U.S. dollar, the potential for additional shocks from China, and negative interest rates in much the rest of the developed world. This was good policy, and it has helped the U.S. economy to stabilize. The dollar has declined, and inflation expectations rose. But the Fed cannot continue to push off hikes while reiterating its intention to normalize policy. In the 1980s, Volcker was forced to claw back credibility for the Fed, and it took him years to do so.

Committing the error of raising rates without necessity would slow the U.S. economy further hindering the economic expansion. A policy error does not have to have tragic outcomes. Raising rates at a moderate pace is unlikely to cause an imminent recession, but it will hinder the recovery for little reason.

At the pace of the Fed’s own dot plot, interest rates will rise on a trajectory that almost guarantees an error. But it is an error the Fed needs to commit. Regardless of whether the policies are good or bad, the Fed cannot risk its credibility—credibility is critical to the efficacy of the tools it will use in the next downturn. The Fed must commit an error.