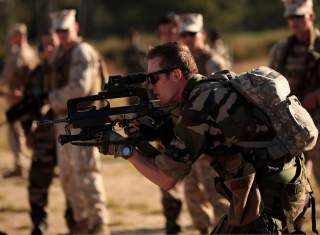 More than four years ago, French troops dropped into Mali to fight back Islamic militants. While in combat, the French soldiers with their bullpup FAMAS rifles lobbed rifle grenades — a relatively rare weapon in the 21st century and distinguished from modern grenade launchers by being launched from a rifle’s muzzle.

Rifle grenades still show up in wars, but they’re less common than they used to be. The French Army — along with the Japan Ground Self-Defense Force — are two regular armies which still keep them in significant numbers. The Israeli army fields some interesting rifle grenades designed for blowing doors off their hinges.

The French Army was the first to use rifle grenades on a large scale during World War I, adopting the 3.3-pound V-B — or Viven-Bessieres — grenade and launching them from Lebel rifles. The brutal realities of trench warfare spurred the adoption of the weapon, as rifle grenades allowed soldiers to launch the small bombs at plunging angles into enemy trenches.

The United Kingdom adopted the collared Hales rifle grenade, and the United States developed the grooved Babbit. Anti-tank rifle grenades — a British innovation — emerged in World War II. Yugoslavia crafted its version of the 7.62-millimeter SKS carbine with a built-in rifle grenade mount on the muzzle.

The U.S. Army and Marines scooped up Belgium’s popular and powerful Energa grenades during the early 1950s due to the threat of North Korean T-34s, and then developed the M31 which could launch from the M1 Garand, M-14 and M-16.

The U.S. Marine Corps even evaluated the French 73-millimeter STRIM rifle grenade — no longer in use — with a view toward possibly adopting it, but turned it down because it “may explode upon being fired,” according to a 1957 Picatinny Arsenal study.

Most armies moved on from rifle grenades, but they kept developing and fielding grenade launchers. Within the U.S. military, underslung M-203s and dedicated 40-millimeter launchers such as the M-79 and automatic Mk-19 allowed for more ammunition, higher rates of fire and were less painful to shoot.

For an example, see this French soldier launching a grenade from his FAMAS.

For another view, see French troops firing them in Mali at the 0:46 mark here.

To be sure, the French Army has anti-tank missile launchers including the Javelin, MILAN and the ERYX. But the French Army’s unusual love for rifle grenades has its benefits.

With every soldier potentially carrying a grenade launcher, a French platoon or company retains a considerable amount of portable anti-tank and anti-personnel firepower. But there’s an argument that a single soldier with a dedicated launcher is a better use of resources.

On the other hand, the French Army uses the APAV40 rifle grenade, which packs more punch and is capable of penetrating 100-millimeters of armor. The FAMAS also relies on a bullet-trap device which allows a standard cartridge with a bullet attached to propel the grenade — as opposed to blanks which can complicate logistics and add extra weight to the soldier.

Without a bullet-trap device, you would not want to accidentally load and fire a live round into the grenade mounted on the muzzle.

The APAV40 is powerful enough to punch through the armor of a T-55 tank from the sides and rear, which is the kind of tank the French Army with its expeditionary focus is most likely to face. More to the point, the French emphasis on elan, or dash, emphasizes speed and efficiency, reflecting the French Army’s small size and tight budget.

These limitations create an “an insistence on modest objectives, on limiting strictly the aims of a military invention in line with a modest assessment of what the military can accomplish,” political scientist Michael Shurkin wrote in a 2015 article for Politico.

“The French thus aim low and strive to achieve the minimal required. Whenever possible, they try to limit the use of the military to missions for which militaries really can be of use. Meaning, militaries are good at violence; if violence is what is required, then send in the military. Otherwise, not.”

Following this logic further, is it strictly necessary — the juste mésure — to expend a $78,000 Javelin missile to destroy an enemy sniper when a $200 rifle grenade will do? If it isn’t, then hit him with a rifle grenade.

France is replacing the FAMAS with the HK416, a carbine closely based on the AR-15, gradually over the next decade. However, unlike other versions of the HK416, France’s standard-infantry version comes with a bayonet lug and a mount — naturally — for launching rifle grenades.

This was first published in WarIsBoring here.