Why the Navy Is Completely Desperate for More Aircraft Carriers 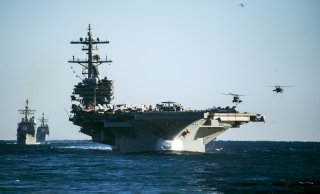 The House Armed Services Committee is seeking to accelerate the construction of a new aircraft carrier and wants to examine the possibility of extending the life of a current one. The message: America needs more carriers—and fast.

In the lastest mark up the Fiscal Year 2019 National Defense Authorization Act (NDAA), the Seapower and Projection Forces Subcommittee inserted language to move up the construction of the next Ford-class carrier. “The Secretary of the Navy may enter into one or more contracts, beginning with fiscal year 2019 program year, for the procurement of one Ford class aircraft carrier to be designated CVN-81,” the new text reads. It added that this “may be procured as an addition to the contract covering the Ford class aircraft carrier designated CVN-80.”

This essentially pushes up the date of construction of CVN-81 two years. Washington had planned to begin building a new Ford-class carrier every five years. If this new language is included in the final NDAA, construction of CVN-81 would be authorized to begin only three years after Enterprise (CVN-80). Initially, CVN-81 was scheduled to be delivered to the Navy in 2032, so this would push it up to roughly 2029. For that to happen, the Appropriations Committees in the House and Senate would still need to fund the new plan.

One of the significant advantages of authorizing a two carrier buy are the potential cost-savings. As USNI News reports: “The Navy and Newport News Shipbuilding are working now to finesse the cost-savings estimate for buying CVN-80 and 81 components together, though Newport News has said its portion of the carrier alone could see $1.6 billion in savings, and the Navy has said overall savings – including the purchase of government-furnished equipment – could approach $2.5 billion.” The procurement costs of the CVN-80 have been estimated to be around $13 billion in then-year dollars while CVN-81 was expected to cost $15 billion (as a result of inflation). Either way, $2.5 billion in savings is a significant percentage.

The second advantage of building aircraft carriers every three years, according to the Congressional Research Service, is that it would enable the Navy to reach its goal of maintaining twelve operational carriers on a sustainable basis by 2030. In 2016, the Navy set a force level goal of having twelve aircraft carriers—although it is only mandated by Congress to maintain eleven of them.

The new markup also asks the Secretary of the Navy to examine whether the life of an existing aircraft carrier can be extended to maintain a force of twelve carriers before 2030. “With the delivery of the USS John F. Kennedy (CVN 79) in 2023, the Navy will reach their 12 aircraft carrier goal but will quickly lose this overall capacity with the programmed retirement of USS Nimitz (CVN 68) in fiscal year 2023,” the NDAA markup reads. “The committee believes that service life extension options may be available for USS Nimitz.” It asks the Secretary of the Navy to brief the committee on the feasibility of extending the USS Nimitz beyond its fifty-year lifespan by March 1, 2019. It says this briefing should include the extension of major components, cost estimates and major modernization components.

As Tyler Rogoway points out, the life extension plan might be attractive to the Navy, especially because the service is still working out the kinks of the initial Ford-class carriers. Furthermore, the Navy has already been examining life extension programs for other vessels in an effort to field a 355-ship navy. In fact, the Navy recently indicated it plans to extend the lifespan of the entire fleet of Arleigh Burke–class destroyers. That being said, there is one big difference between ships like the Arleigh Burke–class destroyers and the Nimitz-class carriers. Namely: the latter are powered by a nuclear reactor. Extending the life of the carrier’s reactor beyond fifty years simply may not be possible. A House Armed Services Committee staffer told USNI News that the committee wants the Navy to examine the fuel that is left in the carrier's reactor to see if it might be doable in this case.

Regardless of the fate of the USS Nimitz, the future of America’s carrier force is the Ford class. The lead ship of the class, the Gerald R. Ford, was delivered to the Navy on May 31, 2017, and commissioned into service on July 22, 2017. The Ford class has a number of new technologies when compared to its predecessors, including “a larger flight deck able to increase the sortie-generation rate by 33-percent, an electromagnetic catapult to replace the current steam system and much greater levels of automation or computer controls throughout the ship.”

The ships are also being built in order to accommodate future software, sensors, weapon systems and other technologies as they are developed. This is made possible, in part, because Ford-class carriers boast four massive generators that collectively produce 104 megawatts of electricity in order to power the Electro-Magnetic Aircraft Launch System (EMALS)—and potentially lasers and railguns in the future. According to the Navy, this means the Ford class will have three times as much electrical-generation capacity of any previous carrier.