Why the OSCE Keeps Failing to Make Peace in Nagorno-Karabakh 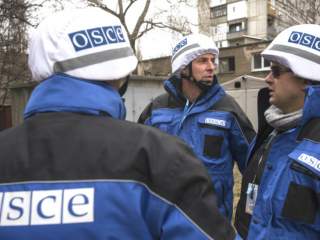 The unprecedented escalation of hostilities on the frontline between the armed forces of Azerbaijan and Armenia on April 2–5, 2016, brought the Nagorno-Karabakh conflict back onto the international community’s agenda. Four days’ fighting once more reminded the world about the urgency of resolving this very complex, yet at the same time very dangerous conflict in the center of Eurasia.

The conflict started at the end of the 1980s, when violent separatism aided by Armenia erupted in the Nagorno-Karabakh Autonomous Oblast of Azerbaijan (NKAO), seizing the opportunity created by the collapse of the Soviet Union. The conflict gradually evolved into a full-scale interstate war between Armenia and Azerbaijan as they gained independence in 1991, resulting in about thirty thousand deaths and creating over a million Azerbaijani IDPs and refugees. The active phase of the bloodiest of the post-Soviet conflicts ended with a ceasefire agreement of 1994. The agreement left Nagorno-Karabakh and seven adjacent regions, roughly 20 percent of the internationally recognized territory of Azerbaijan, under Armenian occupation.

The OSCE Organization for Security and Co-operation in Europe (OSCE)’s Minsk Group was created in 1992, and the co-chairmanship institution (with Russia, France, and the United States co-chairing) was introduced in 1994 in order to carry out mediation between Armenia and Azerbaijan to find peaceful resolution of the Nagorno-Karabakh conflict. However, despite more than two decades of negotiations, OSCE mediation has failed to deliver peace to the region. Similar to other conflicts in the post-Soviet space, such as in Georgia, Moldova and Ukraine, where the OSCE has also deployed peacemaking and peacekeeping missions, the Armenian-Azeri peace process appears to be a failure. Of course the OSCE is making certain efforts towards reaching a peaceful settlement; however, there are clear shortcomings in these mediation efforts, which prevent galvanizing this complex peace process.

Above all, it should be noted that the OSCE is an intergovernmental organization with no supranational powers. This intergovernmentalism means that any OSCE activity in any member country, and any mission deployed on behalf of the organization, is subject to unanimous approval from all member states, and particularly the country to which the activity or mission pertains. Thus, every country in the organization has an effective veto power on any decision. In 1996 the OSCE was unable to include the famous “three principles” (the territorial integrity of both countries, self-determination for Nagorno-Karabakh in the form of the highest degree of self-rule within Azerbaijan, and guaranteed security for Nagorno-Karabakh and its whole population) in the Lisbon declaration due to Armenia’s objection, despite winning the support of 53 out of 54 member states. This essential systemic weakness constrains the OSCE’s effectiveness in many cases, including in conflict areas when there is need to punish aggressors and protect victims.

In considering shortcomings peculiar to Minsk Group itself, the biggest problem is that it tries not to hurt anyone. The Minsk Group tries to seem neutral, and this near-obsession with neutrality does not allow it to be fair and impartial. It is claimed that openly naming Armenia as an aggressor country and calling for the fulfillment of U.N. Security Council resolutions—which entails unconditional withdrawal of forces from Nagorno-Karabakh—might discredit the OSCE Minsk group in the eyes of Armenian side. However, it does not mean that OSCE can play this game of neutrality over justice forever. The Minsk Group’s co-chairs avoid making clear-cut statements about their positions on Nagorno-Karabakh conflict. They avoid bringing up the fact of occupation; they make general and vague statements at best, or indeed make contradictory declarations depending on whether they are in Baku or Yerevan. In so doing, they claim that they are addressing the resolution of the Nagorno-Karabakh conflict. However, when there is need for a firm position, the co-chairs state that Armenia and Azerbaijan should find a solution themselves since it is their problem, and that the Minsk Group will support any decision they make. This attitude and the visible failure of shuttle diplomacy has resulted in such widespread distrust in OSCE Minsk Group’s activity that the Azerbaijani media has begun to re­fer to the co-chairs’ visits to the region as “tourist excursions.”

The lack of interest and consequent lack of commitment on the part of the OSCE Minsk Group co-chair countries to the resolution process is another visible setback. The co-chairs seem to be dealing much more with “conflict management”—trying to reduce the tensions between parties via occasional visits to re­gion—than with a “conflict resolution mechanism”. The Minsk group has monopolized the resolution process of the conflict, but lacks the needed commitment to push the process forward. This lack of commitment is also seen in the form of the low level of involvement by co-chair countries in the resolution process. The involvement of more mid- or high-level diplomats and politicians might prove effective in accelerating the peace process. Talks that carry high-level international commitment—such as the 2001 Key West negotiations, which involved the US president George Bush—might be a necessary change, given that this low-profile shuttle diplomacy seems to be failing. History shows that when major powers are interested and committed, they are able to facilitate effective negotiations to find a solution to the complex conflicts similar to Nagorno-Karabakh. To give comparable examples, during the bloody dissolution of Yugoslavia, the U.S. commitment and appointment of a special representative was key in hammering out the 1995 Dayton Agreement, while French president Jacques Chirac’s personal involvement played the same role in reaching the 1999 Rambouillet Accords.

Moreover, if in the beginning OSCE involvement as a mediator was intended to represent impartial international involvement, today the OSCE Minsk Group’s approach is a troika-based approach rather than a genuine and inclusive OSCE approach. The OSCE seems to have little influence over the Minsk Group; three chair states are in a full control of the process. On top of that, the three members of troika have their own divergent positions on the peace process, which further hampers the prospect of successful negotiations. Russia has frequently sought to dominate the process, while the United States increased its attention when its stakes rose in the South Caucasus. Moreover, the domestic considerations of these three countries also play a certain role in their approach to the peace process and conflict parties. The three co-chair countries are home to the largest, wealthiest and best-organized Armenian diasporas. For instance, at the beginning of the 1990s, the Armenian lobby managed to block U.S. financial support to Azerbaijan under the “Free­dom Support Act” (FSA) program; in addition, the US ambassadorial nominee to Azerbaijan in 2010 was blocked by influential senators representing U.S. states with powerful Armenian communities. It should also be noted that Moscow is Yerevan’s closest strategic ally, and Armenia is frequently claimed to have de facto protectorate-metropolis relations with Russia.

In fact, the members of Minsk Group troika represent the key global power centers (assuming France’s informal representation of the EU). Thus, if willing, it has the necessary geopolitical weight to pressure the aggressor to compromise, which would eventually bring about a long-awaited and greatly overdue breakthrough in the peace process. However, again, the problem is not one of capacity, but one of political will.

Azad Garibov is a Leading Research Fellow at the SAM Center for Strategic Studies in Baku and Editor-in-Chief of Istanbul-based quarterly academic journal ‘Caucasus International.’