Why Is the Trump Administration Selling Giant Sniper Rifles to Ukraine? 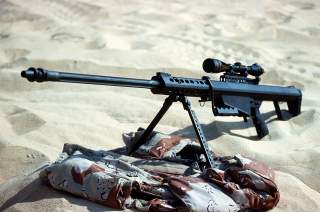 Curiously, the only specific form of lethal aid in the authorization is $41.5 million worth of Barrett M107A1 .50 caliber anti-material rifles, as well as combat shotguns, silencers, military scopes and flash-suppressors. This was a far cry from the 1,200 Javelin anti-tank missiles that Ukrainian president Petro Poroshenko requested.

But just a few days later, the State Department also announced it was licensing $48 million of Javelin missiles—which amounts to 35 launch units and 220 missiles. In both cases, the authorization of the sale does not necessarily confirm that the transfer will occur.

Why did the Trump administration authorize nearly as many millions of dollars for purchasing giant sniper rifles as it did for sophisticated anti-tank missiles?

There are two explanations, one tactical—and the other political.

Though that front line has remained largely static for two years, there are nearly daily outbreaks of fighting involving snipers, artillery and the occasional anti-tank missile. These have caused at least 3,000 deaths on all sides in this frozen conflict, with the violence reportedly intensifying the second half of 2017.

In positional warfare between entrenched defensive lines, snipers have plenty of time to settle into well-hidden nests and wait for opposing combatants to expose themselves to a clear shot. They can also scan for concealed troop concentrations and call in heavy weapons to destroy them. Effective sniper fire can pin troops down—fixing them in position until a heavy artillery strike rains upon them and inflicts heavy casualties.

According to the U.S. Army’s Russian New Generation Warfare Handbook, which is based on observation of combat operations in Ukraine, Russian-trained forces employ snipers on a larger scale than is done in NATO militaries, including platoon-size sniper formations.

Often, three lines of snipers deploy. The forward line is likely to involve local proxy forces with basic assault or sniper rifles, while progressively better-trained mercenary or special forces snipers with high-power rifles make up the middle and rear lines.

According to the handbook, there are only two effective tactical responses when coming under sniper attack. Either immediately disengage when coming under sniper fire to avoid getting pinned down, accepting that a unit will likely “take at least two casualties” in the process—or return accurate fire with heavy weapons or one’s own snipers to neutralize the attacker.

Ukrainian forces, until recently trained according to Russian doctrine, are doing their best to improve their counter-sniper game, but mostly are limited to using Dragunov SVD rifles. While the Soviet-era weapons are ubiquitous and reliable, they are not ideal for extra long-range shooting, especially due to lower-quality sights.

Recently, Russian snipers have been photographed using T5000 sniper rifles, which use the Lapua .338 round. Due to precision manufacturing and the high power it generates for each shot and, the T-5000 boasts an effective range of up to 2,000 meters and can reliably penetrate body armor at a distance.

Enter the Barrett
The M107A1 is perhaps better known as the Barrett M82, the commercial designation of a .50-caliber anti-material rifle in use with the armed forces of more than 60 countries. The U.S. military has been using the M82 since 1990 on a special-issue basis and even tested a bolt-action variant called the XM107.

However, the Army instead decided to stick to a semi-automatic version formally designated the M107A1 for standardized issue. The M107A1 also differs from the standard M82 in being five pounds lighter at only 28 pounds unloaded, uses a cylindrical titanium muzzle break and is designed to be used in conjunction with noise- and flash-suppressors.

The huge .50-caliber BMG rounds come in 10-round magazines weighing one pound each, can fire accurately up to 1.8 kilometers away and can penetrate 20 to 40 millimeters of armor depending on range. Upon firing, the Barret’s barrel assembly is designed to slide backward against a spring to help absorb the recoil, making it easier to handle than preceding World War II-era anti-tank rifles were.

This long-rang hitting power makes the heavy rifle ideal for destroying valuable military equipment such as satellite dishes, missile launchers, sensors on tanks and vehicle motor blocks. The penetration is even sufficient to pose a threat to light armored personnel carriers, or to shoot strait through obstacles as thick as a brick wall—allowing it take out enemies behind cover.

To aid in destruction of materiel targets, the Barrett can also employ special Raufoss NP500 armor-piercing incendiary rounds that explode after penetrating the target. The Red Cross has sought to ban the Raufoss rounds, however, on the grounds they are inhumane against human targets

The sheer energy behind each 12.7-by-99-millimeter slug gives the weapon relatively good accuracy over distance—the rounds experiences less drop—even though purists maintain it is not precise enough to be a ‘true’ sniper rifle. Regardless, the huge guns have been used extensively against personnel targets at very long range, and are listed as having been used for five of the top 20 longest range sniper kills currently on record, with hits achieved at ranges from 1.3 to 2.8 kilometers distant.

Therefore, though the M107’s anti-material applications would remain in demand, the tactical rationale is primarily that they will be used to counter pro-Russian snipers using long-range rifles by extending the reach of their Ukrainian counterparts.

The Ukrainian armed forces already had made limited use of the Barrett. Reportedly, the Yanukovych government acquired M82s in the early 2010s, prior to the war in Ukraine. Photos of Ukrainian forces using Barretts circulated on the internet in 2015. One militia even announced that it had acquired M82s but complained that it lacked night-fighting gear and requested donations of additional firing equipment.

How bad is the need?

“Ukrainians do not feel an acute shortage of such weapons,” according to commentator Pavel Asenkov on BBC Ukraine, and they are “unlikely to greatly alter the balance of power.” Ukrainian military observer Serge Marko argues in the same article that the M107 is too large and heavy to infiltrate to a forward sniping position, and would thus likely be employed to reinforce static defensive positions—a role which heavy machine guns and automatic grenade launchers can already perform effectively.

According to The Washington Post, Trump chose the M107 rifles out of a menu of options presented to him by Tillerson and Mattis. Trump has exhibited conflicting impulses regarding Ukraine. He has frequently expressed his admiration for Putin, and has been eager to improve relations with Russia, including initially seeking to reduce or remove sanctions imposed due to the invasion of Crimea. However, he also criticized Pres. Barack Obama for not providing lethal military aid to Ukraine.

Nonetheless, Trump’s election campaign intervened to remove language calling for the United States to arm Ukraine from the GOP platform in July 2016—likely due to the influence of his then-campaign manager Paul Manafort, who had previously been advisor to the pro-Russian president Viktor Yanukovych of Ukraine.

However, Manafort was ousted from the Trump campaign in August 2016, and Moscow-friendly general Michael Flynn was forced to stepdown as National Security Advisor in February 2017. Trump instead appointed two Russia hawks, Generals H.R. McMaster and Mattis, as national security advisor and secretary of defense, respectively. In the summer of 2017 it became clear the generals’ influence had put lethal weapons sales to Ukraine back on the table.

However, Trump did not want to “give” weapons to Ukraine as aid—he saw it as a means for U.S. manufacturers to make a sale. However, while Kiev would eagerly accept a donation of hundreds of arguably the best anti-tank missiles available, it wouldn’t want to pay for a lot of top-shelf hardware as the government is strapped for cash, and more cost-efficient missiles will likely suffice.

Indeed, Ukraine is attempting to ramp up manufacturing of heavier Stugna and more portable Corsar anti-tank missiles, which can be produced at much lower cost.

These factors may explain the odd decision to approve the export licenses for small quantities of arms. The Trump administration, always looking for ways to undo Obama-era policies, was keen to demonstrate its willingness to flout his predecessor’s caution and provide lethal weapons to Kiev, but didn’t want to to give enough to seriously change the balance of power and possibly elicit Russian retaliation.