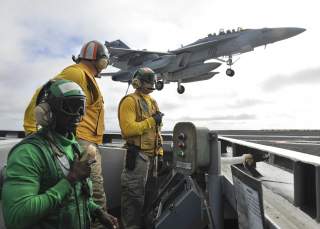 It’s often said that to determine someone’s priorities, take a look at how they spend their time and their money. Organizations are no different. Glancing at an organizational chart does not just reveal reporting relationships – it depicts the organization’s focus. In the U.S. military, the combatant commands organize time (planning) and money (resources). They currently reflect an immediate post-Cold War institutional shift toward a regional orientation that does not match modern needs. Chairman Dunford argued this spring that future “conflicts are very quickly going to spread across multiple combatant commanders, geographic boundaries and functions” and the current planning process is muddled and does not prioritize threats.  The Unified Command Plan (UCP) should be updated to reflect the priorities of the U.S. military by disbanding the geographic combatant commands and replacing them with mission-oriented commands.

The Regionally-Focused Model is Broken

At present, two-thirds of the combatant commands are regional (Africa, Central, European, Northern, Pacific, and Southern) versus functional (Special Operations, Strategic, and Transportation). While geographic commands existed in the origins of the UCP after World War II, post-Cold War security philosophy strengthened the regional emphasis. Today, threats are increasingly global, with potential adversaries spanning geographic areas of operation. Transnational terrorist organizations operate outside geographic boundaries, and states like China and Russia increasingly project power beyond their region in an attempt to regain great power status. Interconnectedness enables groups like ISIS to recruit supporters and funding globally, while state actors use global communications for propagandistic information operations. Further, potential adversaries compete with the U.S. not just globally, but also in global commons such as space and cyber. A complete threat picture requires resources beyond conventional military power. When combatant commanders are responsible for maintaining their regional theater, they operate as global beat cops, ensuring norms and stability in a geographic region. But the interconnected nature of modern communications bind regions more closely together. Transnational terrorists and criminals, refugees, money, goods, technology, information, and political messages all flow across borders. Regionally-oriented commands are out of sync with today’s globalized, interconnected world.

As Kelly McCoy observes, the regional model of operational planning is no longer sufficient. His proposed solution, however, exacerbates the challenge by aligning combatant commands to phases of conflict, an inadequate solution because many challenges, such as gray zones, are not captured well by the phasing construct. Instead, the Department of Defense should align combatant commands by mission, adapting as threats change. Countering a state actor like Russia that utilizes all domains and levels of conflict requires thinking about competition, rather than simply theater-specific OPLANs. U.S. action against Russian expansion in Eastern Europe will impact the possibility for cooperation in Syria. One commander should manage escalation against the whole portfolio of theaters and domains. Mission-oriented combatant commands empower one commander to organize the necessary resources to respond to a challenge, owning the problem set instead of a geographic region. This makes a combatant commander less like a beat cop and more like James Bond, focusing time and resources on solving one mission with intense commitment.

The Chairman of the Joint Chiefs should determine prioritized missions based on the operating environment, and reviewed on the existing biennial UCP review timeline, leveraging networked functional or regional capabilities. Since most threats are state actors, current missions would closely align to many existing commands, but they would not be bound or determined by geography. Today, top priorities include countering Russian aggression in Europe and the Middle East, containing Chinese expansionism in the Asia Pacific, and stabilizing the Middle East, which roughly align to European, Pacific, and Central Commands. Predictable missions like nuclear deterrence or weapons of mass destruction nonproliferation (Strategic Command) and homeland and missile defense (Northern Command) would remain constant. Special Operations Command demonstrates the use-case success of a mission-focused combatant command, with its heavy (although not exclusive) focus on counterterrorism. A combating terrorism mission should continue, but Special Operations forces should also be used to counter-gray zone tactics. These mission-driven commands would be similar to a Joint Task Force model, but with the authorities and influence of combatant commands.

Combatant commanders should draw upon regional or functional enablers to pursue their missions. These force providers would not be dedicated to one command but provide matrix-like coverage for the combatant commanders to employ. For example, a countering Russia mission would require Eastern European and Syrian cultural and military expertise, cyber capabilities, transportation considerations for a potentially contested environment, and Special Operations forces to counter Russian little green men. Conventional forces would need to be prepared in the case of escalation. At present, these challenges cross five combatant commands instead of one mission synchronizing global capabilities. Global resourcing would reduce the duplicative overhead at each combatant command for a more efficient system, while also collocating likeminded subject matter experts that work a slightly different angle of the same problem. This affords the cross-cutting perspective that many of today’s challenges require. These global force providers could include transportation, cyber, military intelligence, humanitarian, disaster, or cultural expertise, and the military services themselves.

This system is not without criticism. It requires combatant commanders to deconflict where their problem sets align, but this is a historical challenge which will continue to require lines of demarcation and open communication where problem sets may overlap. Changing missions regularly may seem like defense policy-by-headline, but the United States should make timely mission adjustments in an increasingly multipolar, interconnected, and complex security environment. This concept actually exists in law – biennial reviews of the UCP to ensure its alignment with the broader security environment have been mandated since 1979. Instead of continuing the regionally aligned focus, a new model should institute COCOMs that respond to the top national security priorities, even if those change. Without adjusting the system that coordinates U.S. funding and forces toward strategic ends, the status quo will persist.

The UCP is signed by the President, so this overhaul would require concerted momentum. The next Secretary of Defense should thoroughly review the current combatant commands for coherence and utility. This mission-oriented solution should be preceded by the type of interim steps Chairman Dunford is already initiating, such as increased collaboration and information sharing across combatant commanders. These steps are a band-aid, however, to the real problem. The next President should initiate a forward-looking transition to a mission-oriented model in their first 100 days.