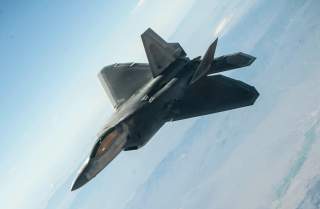 Donald Trump’s election changes everything, including building new F-22s. With a higher defense budget planned, American defense strategy can now move away from being budget driven to instead focus on combat effectiveness. Best value for money alternatives can now win over the lowest cost options. And in keeping America’s air dominance, the best ‘bang for the buck’ is in building new F-22s.

Strategically, American air dominance is in long-term decline as others nations catch up technologically. Donald Trump has though called for America to be great, not simply the equal of other countries as current defense plans will result in. There are proposals to get back America’s air dominance some time beyond 2030 but these leave the next twenty years when America is not great. Building new F-22s allows a much quicker and less risky return to American air dominance. This would make a difference in the near future not in five or six Presidential terms time.

Operationally, the reason American air dominance is declining is that F-22 production was cut under the pressure of the Iraq War. The lack of connection between the two issues is even more evident today than it was then.

In the early 2000s, USAF planned on a force structure of some 380 F-22s and the F-35 Lightening II aircraft and program was designed around this.The F-22 was the high part of the high/ low force mix and would clear the skies for the F-35, the low part of the mix. In now trying to turn the F-35 into a high-end fighter as well as a battlefield bomber, the F-35 program has become overly complicated, very late and over budget. Originally planned to enter USAF service in 2009, the first fully operational version of the F-35 (the Block 4) is now not likely to be available until early next decade.

Given present F-35 plans, USAF now foresees losing air dominance and is calling for a new penetrating counter air aircraft quickly. A new aircraft will however take decades to build.  F-35 advocates consider that the aircraft’s networking abilities will allow, what is admitted to be a mediocre performance aircraft, to be good enough in the air superiority role.  In this, the F-35s networking abilities have been under development for decades but shortcomings remain in connecting to other USAF aircraft and command and control systems.  Extending this concern, retired General Deptula rates USAF building “capable, reliable and redundant, robust” networks as more important even than developing a new six-generation fighter.  There appear concerns that the networks the F-35 needs may fall short in a near-peer threat environment.

If the networks can’t be fully relied upon, the F-35’s mediocre performance starts to become more worrying.  Compared to the F-22, the aircraft is much less likely to survive in unexpected air combat engagements.  In many respects the F-35 offers strong but brittle capabilities; it will perform adequately as long as nothing goes wrong.  Air combat though is more than a simple engineering problem with tactical surprises and enemy defensive actions expected. As the old adage goes, in war the enemy gets a vote. The Trump slogan though is making America great, not making America great only in those situations when others hang back and allow it.

In general terms, USAF thinks that one F-22 has the combat performance of four F-35s. Moreover, one F-22 has a lower cost to build, maintain and crew than four F-35s (USAF is having increasing trouble manning its fighters).  The value for money proposition is clear.

Industrially, the quickest and lowest cost way to build new F-22s is to leverage off the F-35 build facility at Fort Worth. The facility has the capabilities, capacities and supply chain setups to be able to have F-22s rolling off the line within some two years.  New build F-22s could potentially be rolling off the line before the Block 4 F-35s enter service.

Some consider that Lockheed Martin for self-interested reasons would rather sell F-35s then F-22s. Duncan Hunter however thinks this could be overcome if Lockheed was guaranteed F-35 production totals would not change; a larger Trump defense budget would allow this.

A more radical approach might be to pass F-22 production to the principal sub-contractor, Boeing.  The company built the F-22’s wings and the aft fuselage, undertook avionics software integration and provided pilot and maintenance training.  This shift would broaden the American industrial base in creating three sustainable and very competitive major military aircraft manufacturers (Lockheed with the F-35, Northrop the B-21 and Boeing the F-22).  Even so, passing the F-22 to Boeing would probably mean the new builds would be more expensive with production taking longer to begin.

The case to build new F-22s is strong as the Congressional direction to study the matter and report back by January 1, 2017 indicates. The main issue previously has been frugal budgets driving strategy.  Now with the election of Donald Trump, this Gordian knot has been severed. America’s declining air dominance can be reversed. It’s time to start building F-22s.