Why the United States Needs to Join UNCLOS 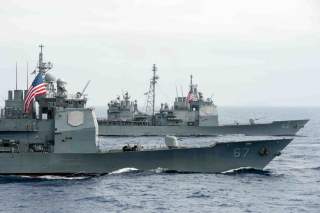 The United States should ratify the United Nations Convention on the Law of Sea (UNCLOS) in the wake of Manila’s victory over Beijing in The Hague-based Permanent Court of Arbitration (PCA) says one senior Democratic lawmaker. The United States—which acts as the guarantor of the liberal-institutional world order—is notably absent from the treaty—much to the chagrin of executive branch officials.

“I think this is also important to note today that there was one party notably absent during deliberations in this case: the United States.  As the United States is one of only a few countries that has not yet ratified the UN Convention on the Law of the Sea, our representatives were not allowed to participate in the adjudication process,” Rep. Joe Courtney (D-CT), ranking member of the House Armed Services Committee’s (HASC) Seapower and Projection Forces Subcommittee said in an emailed statement. “Undoubtedly, U.S. interests were not served by the rejection of our request to observe these proceedings. This ruling clearly demonstrates why our nation must finally ratify the Law of the Sea treaty, and I continue to call on the Senate to heed the advice experts and military leaders by approving this treaty without delay.”

Earlier this year in March, Courtney introduced a bipartisan resolution—H. Res. 631—alongside Rep. Don Young (R-AK) calling on the U.S. Senate to finally ratify the UNCLOS treaty. Indeed, many senior Defense Department officials have been privately pleading with lawmakers to ratify the treaty for years.

More recently, the Pentagon’s top military officer in charge of the Pacific suggested that the United States’ must ratify the treaty if the country is to have any credibility on the issue going forward. Admiral Harry B. Harris, Jr., commander of United States Pacific Command, has said that not being a signatory to the UNCLOS opens the United States up to accusations of hypocrisy, it also has an economic impact as Washington cannot press its claim in the Arctic, for example.

“I’m a proponent of it [UNCLOS],” Harris testified before the HASC on Feb. 24. “I think that in the 21st century our moral standing is affected by the fact that we are not a signatory to UNCLOS.”

Nonetheless, Courtney applauded the PCA ruling. “In reclaiming more than 3,000 acres of land from the seafloor, militarizing the majority of it, and attempting to partner with landlocked states to write a false narrative justifying their actions, it ought to be clear that China’s actions are jeopardizing the international rules-based order,” Courtney said. “In light of this binding decision today, China and other stakeholders in the region must work cooperatively and constructively to uphold the rights and responsibilities affirmed under international law.”

But not everyone is happy with the ruling. Taiwan—also known formally as the Republic of China—reacted furiously to the court decision. “The Tribunal ruled that Taiping Island, the largest feature the government of the Republic of China (ROC, Taiwan) has effectively controlled for more than 6 decades in the Spratly Islands, is not an island but a rock,” said Thalia Lin, an executive officer in the press division at the Taipei Economic and Cultural Representative Office in the U.S—which is Taiwan’s de facto embassy. “This is an ignorance of the fact that Taiping Island can sustain human habitation and economic life of its own with fresh water, vegetables, fruit, poultry and livestock grown or raised locally, which makes it indisputably qualifies as an ‘island’ according to the specification of Article 121 of UNCLOS.”

As such the Taiwanese government forcefully rejected the PCA ruling. Below is Taipei’s complete statement:

The award rendered by the tribunal at the Permanent Court of Arbitration in the South China Sea arbitration is completely unacceptable to the government of the Republic of China. The tribunal’s decisions have no legally binding force on the ROC, for the following reasons:

(1) In the text of the award, the ROC is referred to as “Taiwan Authority of China.” This inappropriate designation is demeaning to the status of the ROC as a sovereign state.

(2) Taiping Island was not originally included in the Philippines’ submissions for arbitration. However, the tribunal took it upon itself to expand its authority, declaring ROC-governed Taiping Island, and other features in the Nansha (Spratly) Islands occupied by Vietnam, the Philippines, and Malaysia, all to be rocks that “do not generate an exclusive economic zone.” This decision severely jeopardizes the legal status of the South China Sea Islands, over which the ROC exercises sovereignty, and their relevant maritime rights.

That the ROC is entitled to all rights over the South China Sea Islands and their relevant waters is beyond dispute. The arbitral tribunal did not formally invite the ROC to participate in its proceedings, nor did it solicit the ROC’s views. Therefore, the award has no legally binding force on the ROC.

The ROC government reiterates that the South China Sea Islands are part of the territory of the ROC and that it will take resolute action to safeguard the country’s territory and relevant maritime rights.

Thus, the PCA ruling marks the start of a long and painful new chapter in the South China Sea saga.