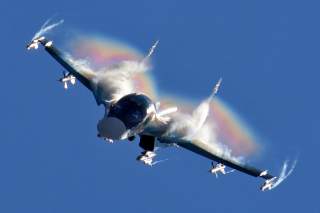 The United States is no longer the “hyperpower” it once was in the immediate aftermath of the Cold War and the collapse of the Soviet Union. Where once Washington held a position of complete dominance, the United States is now faced with competing powers—some of which can field peer-level capabilities.

“The military environment has shifted away from the existence of the United States as the single ‘hyperpower’ to a situation in which foreign militaries are emerging with near-peer and, in some areas, peer capabilities,” U.S. Marine Corps. Lt. Gen. Vincent R. Stewart, director of the Defense Intelligence Agency told the Senate Armed Services Committee in his written testimony on May 23. “Adversaries have studied the American way of conflict and have developed, and will continue to develop, capabilities to mitigate or directly challenge longstanding U.S. military dominance in all warfighting domains—terrestrial, maritime, air, space, and cyber—and to raise the level of complexity and risk to the United States for intervention in conflict. Competitor states will employ all diplomatic, economic, political, and covert mechanisms of influence and coercion available to them in advancing regional agendas, with the implied or actual use of military force acting as the amplifier that allows these whole-of-state efforts to resonate.”

The two powers that are most directly able to challenge the United States remain Russia and China. Russia is expected to continue its military modernization in 2017. “Russia continues to invest heavily in force-wide modernization efforts, emphasizing joint force interoperability, technologically advanced command and control systems, and defense-industrial capacity,” Stewart wrote.

Despite its problems, the Kremlin has proven to be more or less successful in reforming its military away from the Soviet-era mass mobilization force that was designed to fight World War III against to NATO into a tool that can be used to project power into Russia’s periphery. “Overall, Russia’s reforms are progressing and effectively building a more agile force that is capable of conducting expeditionary operations and providing support to combat operations outside Russia,” Stewart wrote.

The People’s Republic of China, meanwhile, is busy transforming itself into a juggernaut that might one day to be able to go toe-to-toe with the United States. “China continues to move forward with reforms aimed at strengthening the Chinese Communist Party’s control over the military and enhancing the ability of the People’s Liberation Army (PLA) to fight in regional conflicts and operate at greater distances from the Chinese mainland. China’s leaders are seeking ways to leverage China’s growing military, diplomatic, and economic position to advance the country’s international influence,” Stewart wrote. “In 2016, President Xi Jinping stated that it was China’s ‘strategic task’ to build a powerful army commensurate with China’s international status and ‘an army that can fight and fight to win.’”

To achieve its goals, China is undertaking massive reforms of its forces. “The PLA is implementing massive structural reforms designed to improve leadership, administration, and command of joint operations across the force by 2020,” Stewart wrote. “Changes include rebalancing the forces to raise the relative importance of the Navy and Air Force and establishing a theater joint command system for the five theaters of operation. Recent military reforms in China created the Strategic Support Force, designed to consolidate the PLA’s cyber, space, and electronic warfare capabilities.”

Additionally, as part of its modernization drive, China is developing a vast range of long-range precision-guided conventional munitions. “China’s military modernization plan includes the development of capabilities to attack at long ranges adversaries that might deploy or operate within the western Pacific Ocean in the air, maritime, undersea, space, electromagnetic, and information domains,” Stewart wrote. “China has fielded and is developing numerous cruise missiles for land and maritime targets, to be launched from its most advanced air, ship, and submarine platforms. China is working to upgrade its surface and subsurface naval fleet with advanced longer-range anti-ship cruise missiles, some of which will reach supersonic speeds and could be fielded on China’s most capable surface combatants. The PLA is also upgrading its aircraft with anti-ship and air-launched cruise missiles for land-attack and surface ship targets, and with two, new air-launched ballistic missiles, one of which may include a nuclear payload.”

Further, as the country continues to grow in its capabilities, China is modernizing its nuclear forces. “The PLA is modernizing its nuclear forces by enhancing silo and road-mobile ICBMs and adding other road-mobile systems,” Stewart’s testimony states. “The PLA Navy’s Jin class nuclear-powered ballistic missile submarine, when armed with the JL-2 submarine-launched ballistic missile, will provide Beijing with its first sea-based nuclear deterrent. China probably continues nuclear R&D, maintenance of existing warheads, and production of new nuclear warheads. The country has the industrial capacity to enrich uranium and process plutonium for military requirements.”

There are no real surprises in Stewart’s testimony. The United States’ post-Cold War unipolar moment was inevitably a temporary state of affairs. The international system abhors a vacuum and it was only a matter of time before new challengers arose.