Why the U.S. Air Force Should Expand its T-X Buy 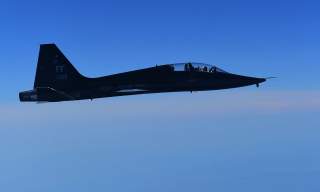 The long-serving Northrop T-38A Talon advanced jet trainer is a mainstay of the United States Air Force. Though elderly, the Talon remains an excellent aircraft, but it is clear that the service must proceed with the T-X Advanced Pilot Training (APT) program.

The Talon first flew on March 10, 1959, and entered service on March 17, 1961. While a majority of the operational fleet has been upgraded with new avionics into the T-38C configuration, the fact is that the airframe is over 55 years old. Indeed, as Skip Hinman, Air Education and Training Command’s branch chief for Advanced Pilot Training (APT) told me last year, by the time T-X is fully fielded, the T-38 airframe will be 73 years old—that’s if the Air Force manages to hold to the current projected timeline.

But there are plenty of original configuration T-38A aircraft still flying with the Air Force in a variety of ancillary roles such as supporting Northrop Grumman B-2 Spirit stealth bomber operations and as aggressor support. Indeed, most of the U.S. Air Force’s elite Lockheed Martin F-22 Raptor stealth air superiority fighter wings maintain a unit of T-38A Talons to fly as aggressor support planes.

I had the opportunity—courtesy of Col. Pete Fesler, commander of the elite 1st Fighter Wing at Joint Base Langley Eustis, Virginia—to fly in one of the 71st Fighter Training Squadron’s T-38A aggressors during Atlantic Trident 17, a large multinational exercise that brings together the U.S. Air Force’s F-22 Raptors, F-35A Joint Strike Fighters, the Royal Air Force’s Eurofighter Typhoons and the French Armée de l'Air’s Dassault Rafales. While the Talon is not the ideal aggressor for those advanced fighters to fly against, it provides an invaluable service as an adversary.

The Talon—even in the bare bones configuration that I flew in—is cheap to fly and easy to maintain. It also provides a reasonable facsimile of fighter performance—indeed, the Talon shares the same basic family ancestry from the Northrop N-156 as the legendary Northrop F-5 Freedom Fighter and Tiger II series fighters as well as the ill-fated F-20 Tigershark. As such, the aircraft is capable of supersonic speeds in the region of Mach 1.2 to Mach 1.3. The T-38A is also a reasonably maneuverable jet with a 7.2G load limit—though in practice the 1st Fighter Wing limits the aircraft to 5.5G due to its advanced age.

For units like the 1st Fighter Wing that fly advanced fifth-generation stealth fighters, finding adversaries is often difficult. Other fighter units are reluctant to train against F-22s and F-35s because they get little useful training out of the deal—most often they are shot out of the sky completely unaware that they are even under attack when playing the part of “Red Air.” Moreover, there are simply not enough aggressors for the Raptors—and eventually F-35s—to munch through. That is where the T-38A shines—the diminutive Talon provides a cheap and relatively plentiful “bandit” for the F-22s to shoot down to their heart’s content.

But the T-38A has its limitations. It does not have aerial refueling capability, it lacks a radar and does not have the power, G-load capability or high angle of attack capability needed in a modern advanced trainer or an aggressor. Indeed, during my sortie yesterday, my pilot Tsar and I were forced to return to base after being shot down by a Typhoon—which was being cued by a Raptor—after only one regeneration because of the need to maintain fuel reserves as a result of inclement weather.

If the Air Force procured enough T-X aircraft—particularly a version with a radar such as the lightweight active electronically scanned array Elta EL/M-2052—the service could replace the aggressor Talons with those jets. The T-X—either Lockheed T-50A or Boeing’s entrant—could easily mount such a radar. Moreover, both aircraft have the option to be equipped with aerial refueling capability and offer power and maneuverability comparable to a fighter. With President Donald Trump’s military build-up, the service should consider expanding the T-X buy to replace the T-38As serving in ancillary roles such as the aggressors.