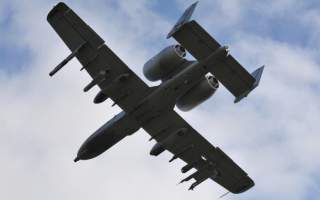 Even as the highly emotional debate over the fate of the Fairchild Republic A-10 Warthog rages on, the United States Army is signaling that it does not care how the U.S. Air Force provides close air support so long as that service gets the job done.

“The only thing I care about is the effect on the target, I don’t give a rat’s ass what platform brings it in,” Army chief of staff Gen. Mark Milley told an audience at the Center for Strategic and International Studies in Washington, D.C., on June 23. “I could care less if it’s a B-52, if it’s a B-1 bomber, if it’s an F-16, an F-15, an A-10. I don’t care if the thing was delivered by carrier pigeon. I want the enemy taken care of.”

While the Air Force does not dispute that the A-10 is its most capable close air support machine, the service does contend that the Warthog will not be able to deliver those effects inside highly contested airspace. Though some contend that the A-10 might be able to survive inside highly contested airspace—those voices are few and far between and increasingly marginalized. Generally, most military officials agree that only stealthy aircraft can survive inside a radius defended by advanced Russian-built air defenses.

Indeed, the question of the A-10’s survivability becomes much more pertinent as the Army moves towards fighting inside those heavily defended environments. Milley noted that the Pentagon—and the Army in particular—has started to train to fight in environments where air superiority is not assured. The reason for the Army’s shift is the renewed focus on great power confrontation after nearly two decades of fighting counterinsurgency wars.

One example of that is in the European theatre where the Russian threat has spurred a NATO response. In the event of an all out war in Eastern Europe, it is highly dubious that an A-10 could get close enough to a Russian armored formation to deliver its ordnance. Even during the Cold War, A-10 units were not expected to survive long against a massive Warsaw Pact invasion of the West. Indeed, Russian air defense systems have only gotten more capable in the interim—and unlike U.S. Army formations—Moscow’s ground forces are always accompanied by highly-capable mobile integrated air defenses.

The top tier of the Russian Ground Forces surface-to-air missile defense capability is provided by the fearsome Buk-M3, which is about to enter service. The older version, the Buk-M2—also known by its NATO code name SA-17 Grizzly—is also a fearsome weapon. But according to Russian sources, the Buk-M3 is actually more capable than some versions of the S-300 strategic surface-to-air missile system that is operated by the Russian Aerospace Forces. Indeed, many Air Force officials consider an area defended by the SA-17 and the Buk-M3 to be a de facto no fly zone for conventional fourth-generation aircraft.

“The results of the state tests indicate that by a number of its characteristics the [Buk-3M] system has fully complied with the technical requirements and equalled the S-300, and by some of the parameters has even surpassed this system,” a Russian defense ministry official told the Moscow-based TASS news agency. “First of all, the Buk-3M target-destruction probability has reached 0.9999, which the S-300 system does not have...This means that the system is surely capable of destroying a target with one missile.”

But even the lower tiers of the Russian Ground Force’s air defenses are extremely formidable. The Pantsir-S2 has a range of about 19 miles and can engage targets at altitudes of about 33,000ft. The older Pantsir-S1 can attack two targets simultaneously and can attack as many as 12 targets in less than a minute. Indeed, there is also an airborne variant of the Pantsir-S2 that can be dropped alongside paratroopers called the Ptitselov.

Indeed, when the Russians deployed the Pantsir-S1 to Syria, U.S. defense officials wondered out loud why Moscow would need an anti-access/area denial (A2/AD) capability in the region. “We’re a little worried about another A2/AD bubble being created in the Eastern Mediterranean,” Air Force Gen. Philip Breedlove said last September when the Pantsir-S1 was first deployed to Syria. “We see some very sophisticated air defenses going into these airfields.”

The bottom-line is that when engaged in a high-end fight, the A-10 might not be the right platform for the job given the modern threat environment. While since the end of the Cold War U.S. forces have been accustomed to the U.S. Air Force being able to maintain total air superiority, in the coming era, that might not always be possible. As such, the Army is preparing to fight in an environment where air superiority is not taken for granted and where American troops may come under attack from enemy warplanes for the first time since the Korean War.

Nonetheless, Milley reiterated his faith in the Air Force to deliver close air support to his forces regardless of the aircraft type involved. He said that he is confident the service will make the best choice possible and that it is not his place to comment on what aircraft the Air Force chooses to use for close air support. “It’s an amazing organization,” Milley said. “I can tell you from personal knowledge they have never failed me... and it doesn’t fail the Army. Period. Full stop. And I don’t care what the platform is, the Air Force delivers, they deliver on time and on target and they do it every time.”