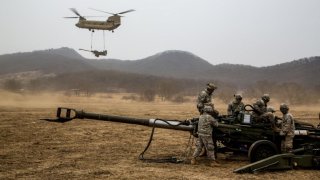 Wide Area Security (WAS), what used to be called stability operations, is supposed to be one of the U.S. Army’s core competencies. It involves much more than providing security for rear areas or occupying enemy territory during the course of hostilities. Nor is it limited to classic counterinsurgency operations. As described in Army documents, it includes a range of tasks well beyond those reasonably considered to be part of counterinsurgency: establishing civil control, restoring essential services, supporting governance, supporting economic and infrastructure development.

Until recently, the Army believed WAS to be as important a mission as classic combined arms maneuver, what most civilians would call combat. Army leaders, and a lot of academics and defense experts, made the argument that while superiority in combat was necessary to defeat an adversary, particularly an enemy nation state, only success in conducting WAS could bring about a stable, long term peace. Advocates of WAS like to point out that while it only took this country around three and a half years to defeat the Axis powers, the U.S. military has maintained forces in Germany and Japan for the past 71 years. A similar situation persists in South Korea. The military’s effort to secure the peace in Afghanistan has been going on for more than 15 years and in Iraq for nearly as long without an end in sight in either case.

As a result of what ultimately must be recognized as the difficulties in these last two WAS campaigns, there has been a strong backlash both in government and by the American public. In fact, the Obama Administration’s 2012 Defense Strategic Guidance states explicitly that U.S. forces will no longer be sized to conduct large-scale, prolonged stability operations.

Yet, many within the Army and among its outside supporters insist that WAS must continue to be a major mission area for that service, requiring the development of doctrine, tactics and capabilities and even the designation of units that specialize in it. They argue that increased instability in the international environment raises the prospects for major upheavals and protracted stability operations. They also observe that another administration may take precisely the opposite stance to that of the Obama Administration and for this reason the Army, in particular, must be prepared for a major WAS campaign.

The most recent turn of the screw in the debate over WAS is a widely publicized study by a class at the Army War College.  The study advocates a number of changes to Army recruitment, training and career development and organization to increase its effectiveness at WAS and the related area of building partner capacity. The most controversial of its recommendations is to make the Army National Guard responsible for this mission.

WAS is not easy to do. If it were we would not still be in Afghanistan and returning to Iraq. In fact, these two conflicts truly demonstrated that the U.S. military is not good at WAS, broadly defined. It has been quite successful at enhancing partner capacity, creating and sustaining indigenous security forces, providing Western military gear and associated training and building and maintaining physical infrastructure. This is because these are technical and tactical challenges which the U.S. military does every day for itself. The problem is that we mistake our success in building security forces for the real tasks necessitated for a successful WAS campaign which are political, economic, educational and even cultural reforms.

The Army can train indigenous combat forces and even their supporting elements. What it failed to do, what was not achievable, was to create the competent governmental, legislative and political structures to support and sustain security forces. Iraqi forces collapsed in the face of ISIS not because they hadn’t been properly trained and equipped but as a result of being undermined by an incompetent government and a political system that valued political loyalty over professional capability. The U.S. military, really the whole of the U.S. government even with the support of allies and coalition partners, has been spectacularly unsuccessful at bringing stability to the governments and politics of most of the countries in which we have practiced WAS.

The problem of conducting a WAS campaign is even more fundamental. The other day The Washington Post published David Ignatius’s interview with the Director of National Intelligence Lt. Gen. (Ret.) James Clapper on the security environment in the Middle East. Addressing the fundamental challenge of instability in the region, Clapper said this: “The U.S. can’t fix it. The fundamental issues they have — the large population bulge of disaffected young males, ungoverned spaces, economic challenges and the availability of weapons — won’t go away for a long time. . . Somehow the expectation is that we can find the silver needle, and we’ll create ‘the city on a hill.’ ” A successful WAS campaign in any of the Middle East countries one might imagine requiring such an effort would take not years or decades but centuries.

Simply put, WAS as conceived of and practiced by the U.S. military, but particularly the Army, is not enough. The creation of the political, organizational and economic environments required for a secure and stable peace in places like those in which WAS has been conducted over the past two decades is beyond the capacity of the entire U.S. government. We are fooling ourselves, our indigenous allies and international partners to believe otherwise. The Army War College study is wrong to suggest that the problem can be addressed by improving recruitment and training, working closer with interagency partners or restructuring the National Guard. It is time for the Army to say “no mas” to WAS.