Why the U.S. Army's Readiness Crisis is So Terrifyingly Real 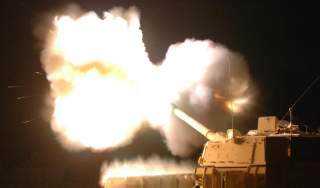 The Huffington Post recently ran an article by David Wood in which he disputed claims of a readiness crisis in the Army. Wood insisted that, in spite of contrary views expressed by senior civilian and military leaders in the Pentagon, the Army “is more ready for major combat that it has been at any time since 2003.”

To reach this conclusion, Wood draws primarily from a misunderstanding of operational requirements, misrepresentation of expert testimony, and wishful thinking. However, the facts and sources he uses to debunk the “readiness myth” tell a very different story when viewed in a larger context.

What does it mean to be ready for major combat? According to historical averages, the Army commits the equivalent of 21 Brigade Combat Teams (each BCT has about 4,500 soldiers) to a major engagement. Yet today, only one-third of the active Army’s BCTs are rated “ready” for combat.

In addition to remaining prepared for major engagement the Army must also be able to meet ongoing commitments around the world and to deter opportunistic enemies from acting against America’s interests while troops are engaged elsewhere. Measured against this requirement, the Army’s current state of readiness does indeed constitute a crisis.

Wood bases his assessment of readiness primarily on the percentage of BCTs that have received training for high-intensity conflicts—a skill that he states has been “largely neglected since 2003.” Of the total number of BCTs (59) in the Army’s active, reserve , and National Guard components, Wood claims that 21 BCTs (approx. 36%) are fully ready and “prepared to immediately deploy into and win a high-intensity war against a great power like China or Russia.” Unfortunately, he mistakenly includes 11 units already committed to ongoing operations. This inconvenient reality reveals that the Army would be unable to meet surge requirements without drawing heavily from National Guard and Reserve forces, which maintain a lower baseline level of readiness and would take far longer to prepare and deploy.

During the height of operations in Iraq, it took all of the Army’s Active BCTs, plus contributions from the Guard and Reserve, to sustain ground operations. From October 2007 until March 2008, the Army maintained 20 BCTs in theater. Sustaining forces in the field on a rotational basis requires approximately three times the amount of forces deployed (as there are simultaneously forces returning from deployment and forces preparing for deployment). It should also be noted that the Army also maintained at least three BCTs in Afghanistan over this same time period. Given the rising threat from near-peer competitors, and with fewer BCTs in the Army’s current force, it is bold, if not dangerous to approach the issue of readiness so casually.

Nonetheless, Wood bases his argument that the Army has what it needs on the statement of Gen. Mark Milley, Chief of Staff of the Army, that his troops “are more capable, better trained, equipped, better led and more lethal than any other ground force in the world today.…”

While highlighting this assertion, Wood omits key content in Milley’s testimony, such as his acknowledgement that “there are serious readiness challenges in the United States Army today.” Milley also noted that, while the Army is adequately resourced to meet current demands, he believes the Army is at “high military risk ” when it comes to the “potential for great power conflict,” between countries with large conventional militaries such as China and Russia.

Still, Wood claims that readiness “critics” are simply insatiable and would be happy with nothing less than “having all 482,000 active-duty soldiers certified ‘combat-ready’ for ‘decisive action.’”

This is an intentional exaggeration, of course, but Wood misses the point that, with the total number of BCTs decreasing, an increasingly larger percentage of them will be needed to meet operational requirements. Ongoing commitments will continue to consume a larger proportion of ready units, leaving fewer forces available for emerging threats and degrading the Army’s surge capacity. Already, Army leaders have requested additional rotational forces be positioned in Europe to strengthen the regional deterrent against Russia and reassure NATO allies.

Wood acknowledges that the demand for Army forces from combatant commanders has grown “by 38 percent in the past two years.” Yet he still claims that the Army, which lost nearly 20 percent of its active component BCTs over the same period, is more prepared than it has ever been.

Regardless of strain placed on combat forces, Wood draws confidence from Capt. Jeff Feser’s promise: “We’re gonna make it work, no matter what. That’s what we’re paid to do.”  That’s a laudable testament, reflecting the “can-do” attitude of our service members. But as former Chief of Staff of the Army, Gen. Gordon Sullivan used to say, “Hope is not a method.”

Continually asking the Army to do more with less puts soldiers at increased risk, in which the costs will be measured in lives lost. In an effort to mitigate this risk, the Army has prioritized near term readiness at the expense of procurement and modernization- a decision that, while necessary, will compromise future readiness and further erode the military’s technological edge.

The Army estimates that a return to sequestration in FY2018 would cut end strength by an additional “60,000 to 100,000 troops.” In order to reverse the decline in readiness across the military, Congress must immediately act to begin rebuilding military strength, starting with the FY 2017 National Defense Authorization Act.

Yes, there is a readiness crisis in the Army. Ignoring it won’t make it go away.