Why the U.S. Military Should Worry If the Philippines Says Goodbye (And It Involves China) 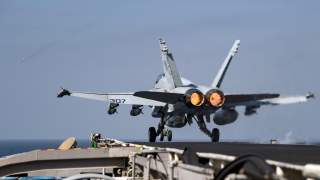 Back in March, as Military Times optimistically reported, the US military was planning to place “permanent logistics facilities” at five bases in the Philippines. In May, the Philippine presidential election put a quick end to that. Since then, new President Rodrigo Duterte's bluster on multiple matters has seemed to rival even the bombast coming from this year’s presidential election in the United States. His approval ratings are high, however, and even transcend demographic distinctions. So let’s consider the issue from a hard-nosed American perspective, drawing on some lessons of history. How did the nature of the Philippines affect American strategy prior to the Second World War, and how might a changing relationship with the Philippines affect materiel planning now?

Signals from the Philippines on this issue of the alliance have been mixed, but mostly bad. On 11 October, Duterte announced that he would not actually abrogate the Philippines’ mutual defense treaty with the United States. At the same time, he asked his own officials, in a speech at the Malacañan Palace, “do you really think we need it?” After all, he noted, the United States did nothing about the Russian invasion of Crimea—though he was brushing past the peninsula’s inaccessibility and Ukraine's lack of an alliance with anyone. On 20 October, things got worse. In a press conference in Beijing, Duterte announced his “separation” from the United States, telling the assembled forum that now “there are three of us against the world—China, Philippines and Russia.” That’s an aspiring-but-horrifying statement, though as John McBeth wrote on 25 October for the ASPI Strategist, “the president has modified his position since returning to Manila, saying he didn’t intend to sever relations.”

The specific alignment of the Philippines today seems very important, but in the United States’ very first round of thinking about war in the Pacific, the islands weren’t a factor. In 1897, the US Navy wrote its first war plan against Japan, on the instructions of Assistant Secretary Theodore Roosevelt. The United States had a coaling station at Pearl Harbor, and possession of small Christmas (Kiritimati) Island and smaller Midway Island. The Republic (recently Kingdom) of Hawaii, however, was an independent country. The Navy's plan called for assisting in Hawaii’s own defense against a (then largely imagined) Japanese effort at forcible annexation. From the American side, a western defensive line of sorts was imagined to arc from the Aleutian Islands around to the Panama Canal. (For an excellent account of all this, see Edward S. Miller’s War Plan Orange: The US Strategy to Defeat Japan, 1897–1945, Naval Institute Press, 1991).

Only in the next year did the Philippines enter the American calculus. At the conclusion of the somewhat accidental 1898 Spanish-American War, the United States took those islands, and Guam. The same year, the United States annexed Hawaii, at the request of its not-exactly-representative government. Immediately thereafter, the United States Army suppressed the First Philippine Republic, in the Philippine–American War (1899–1902), a fight now mostly forgotten here, but remembered distinctly there. American military planning then suddenly and remarkably shifted towards defending the newly acquired islands—again, from Japanese invasion. The immediate problem was that the Navy considered this effectively impossible. At the time, Japan was rapidly industrializing, but the Philippines were as economically lackluster as they remain today. My Timex watch was made there, but I’m driving a Subaru. That’s a tragic story of comparative economic development, but it’s what it is.

Thus, the Navy’s plans for massive dockyards in Manila Bay never amounted to much. The Army, however, really never came to terms with its exposure in the Philippines. The best it could manage, as we now remember in the heroic war stories, was a last-ditch defense of the Bataan Peninsula and the Island of Corregidor, on the western side of strategically important Manila Bay. But in the 1920s, rather than advising evacuation and independence for the undefendable, the Army simply demanded immediate and massive support from the Navy. Until 1939, the (Pacific) Battle Fleet was mostly based in California, 6300 nautical miles away.

In some early effort at jointness, the US Navy’s war plans—the several versions of War Plan Orange in the 1920s—at first imagined a “Through-Ticket to Manila,” a mad dash across the southwestern Pacific. The fleet’s logistical train would have been remarkably exposed to Japanese cruisers and submarines, and eventually aircraft, coming from the north. More sober thinking about the limitations of fighting across the vast distances of the Pacific led to more deliberate schemes by the late 1930s. From these, the now-famous island-hopping campaign was devised, towards an eventual economic strangulation of Japan. The American and Philippine defenders of Bataan, however, would be left to an awful fate. Guam was even more exposed. At points, the war planning staffs of the Army and the Navy bitterly debated how-much-how-soon, but the Army never won the argument.

In 1940, after the war had started in Europe, and particularly after the fall of France and the Netherlands, the Navy even more sharply shifted in its several Rainbow Plans. The color-coding was changed to reflect the new American assumption of multiple allies, if imperiled ones. Those schemes figured that the Japanese could attack the Philippines from the west using bases in Vichy Indochina. The Royal Netherlands Navy could at best provide only limited resistance from the south using bases in the Dutch East Indies. At that point, there was no point in trying to relieve the Philippines quickly. The defense line was rapidly falling back to Singapore in the west, and Darwin in the south. In the west, it would yet fall back to Trincomalee.

For the moment, though, consider how American war plans might have differed had the government in Washington just let the Philippines go in 1898, rather as it mostly would with Cuba in 1902. With the US so removed from the western Pacific, it’s not even clear why the Japanese war cabinet would have attacked the United States at all in December 1941. The Tojo Government, on the other hand, could have been expected to treat the Republic of the Philippines as roughly as it did the Kingdom of Thailand. Either way, today, the Chinese are probably gleeful. Congratulations, Manila. If today feels like 1937, it’s because you’re Brussels, having suddenly ditched your alliance with Paris. Don’t presume that your territory won't be a battleground anyway.

But what does all this mean for how war might be fought today? Quite specifically, Byron Callan of Capital Alpha Partners thinks that Philippine neutrality could shift demand from F-35As to B-21s. Perhaps Duterte’s apparent withdrawal from a close alliance with the US should affect that change. If the Philippine federal government declared its bases off-limits in a war between the US and China, the US Air Force could find itself bereft of any airfields within fighter range of the South China Sea. Again, think about the problem from the other side. In 1940, the US Navy’s plans changed again when it realized that the Japanese Navy had purchased relatively modern, long-range bombers. Its carrier-based fighters could have been outranged during a headlong charge across the islands of the Japanese Mandate. In that context, perhaps Philippine neutrality should also shift demand from F-35As to F-35Cs. That would necessitate shifting money from the Air Force to the Navy, but defense secretaries can get that started with a memo.

Today, actual Philippine neutrality might finally stick a fork in the Navy’s fascination with closing the Chinese coast for a tight blockade. That could have knock-on effects for the Navy’s fleet structure as well. Would the Chinese South Fleet attempt a breakout into the central Pacific through the Philippines? Would American submarines lay traps for them in the Surigao Strait? To affect such a strategy, would the Navy need more submarines? Would it also want more F-35Bs for the smaller carriers of the Wasp and America classes? As Deputy Secretary Work is possibly directing even now, there's a vast amount of wargaming needed to figure out what this might mean. The war colleges will get on that. The contractors might too, if they want to get ahead of what’s next.