Why the U.S. Navy Might Scrap Half of the Most Powerful Warships in Its Fleet 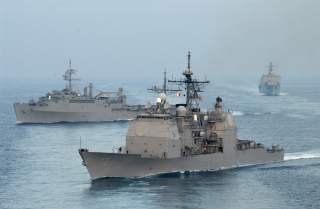 The U.S. Congress is beginning to write the Defense Department’s budget for 2018. For the Navy, that means yet another heated debate over the future of the branch’s 22 Ticonderoga-class guided-missile cruisers.

The Navy wants to decommission 11 of the 567-foot-long cruisers at a rate of two per year starting in 2020, leaving the other 11 to sail on into the 2030s. Under the Navy’s current plan, the last Ticonderoga-class vessel would decommission in 2038, at the ripe old age of 42.

But some members of Congress want potentially all of the aging cruisers to remain in service through the 2030s — for two reasons. First, keeping older ships in the fleet longer is one way to achieve the Navy’s longstanding goal of growing the fleet from today’s roughly 280 front-line vessels to as many 350.

Second, the cruisers perform a unique mission in the fleet that other ship classes can’t adequately undertake, some officials argue. The cruisers handle “air-defense commander” duties for the fleet’s 11 nuclear-powered aircraft carriers.

Spacious, commanded by a captain and heavily-armed with 122 vertical-launch missile tubes — the most of any American warship class — the Ticonderogas are uniquely suited to the air-defense-commander role. Arleigh Burke-class destroyers are less spacious and pack just 96 missile cells.

The Navy has tried more than once in the past 15 years to design a new warship class to directly replace the Ticonderogas. Citing the estimated $3.5-billion, per-vessel cost, the Pentagon canceled the most recent effort in 2010. Instead, new Flight III Burkes could begin filling in as air-defense commanders as the cruisers leave the fleet.

But the new Burkes still lack the space and large missile capacity of the cruisers. And that worries Congressman Rob Wittman, a Virginia Republican and the head of the House of Representatives’ Seapower and Projection Forces subcommittee.

“Instead of discussing the decommissioning of cruisers, we need to spend more time discussing the maintenance, modernization and service-life extension of all 22 cruisers,” Wittman told Defense News, a trade publication.

Wittman’s determination to keep all of the Ticonderogas into the 2030s could sway his committee — and by extension the whole Congress. It wouldn’t be the first time in recent years that the Navy has announced a plan to begin decommissioning cruisers … only for lawmakers to overrule the plan.

In 2012, the Navy proposed to quickly retire five Ticonderogas. Congress balked. In 2014, lawmakers hashed out a compromise. The Navy would keep 11 cruisers in their current configurations, finally decommissioning them in the 2020s. Meanwhile, the remaining 11 ships of the class would undergo $250 million in maintenance and upgrades.

Each time an unmodified cruiser left the fleet, an upgraded one would take its place … and serve an additional decade or so.

If Wittman gets his way, all 22 cruisers would remain the fleet another 15 to 20 years. That could buy the Navy time to try, once again, to design a new cruiser for the air-defense-commander mission.