Why the West is Not Ready for a Democratic Russia 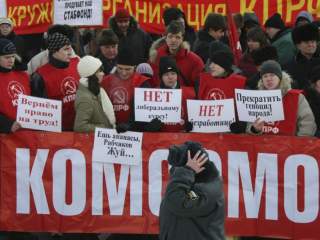 The rise of the Law and Justice party (PiS) in Poland and its “autocracy problem” have created a sense of political emergency in Europe, following the illiberal example allegedly set by Hungary’s Prime Minister Viktor Orbán. Since the European Commission launched a formal rule-of-law investigation on January 13, much ink has been spilled to investigate the consequences of rising Polish illiberalism. Yet a plurality of writers has failed to acknowledge the inconvenient truth that the democratic crisis is of democracy’s own making: the PiS, as well as other illiberal political forces in Europe, have ascended to power not by violence but by winning democratic mandates through free and fair elections.

But a much wider issue is at stake here. Think about it: if we can barely prevent democratic Poland and Hungary (which are deeply embedded in NATO and the EU) from “going rogue,” what makes us think that we would be able to handle a democratized Russia? Here, the central European cases offer illuminating examples that foreshadow the possible future of a liberalized Russia—which, I argue, may not be the best interest of the West, at least for the present moment. Based on recent surveys and political trends in the region, this essay envisions three likely scenarios, all of which are alarming.

The first scenario is the emergence of a multiparty system in Russia, followed by free and fair elections. Recent European examples indicate that, however, free and fair elections may well embolden illiberal forces, especially during times of economic difficulties. Let us recall the case of Moldova, where the free and fair election of 2001 resulted in the landslide victory of the Moldovan Communist Party, making it the first post-Soviet state where an unreformed communist party returned to power. In a liberalized Russian political space, the Communist Party of the Russian Federation (KPRF)—the successor of the Soviet communist party—would enjoy a reasonable chance of becoming a major political force.

Despite the formidable “anticommunist propaganda” put forth by the Yeltsin government, the KPRF received an unambiguous democratic mandate by winning both the 1995 and 1999 parliamentary elections, and served as the ruling party of the State Duma. Political realities in Russia have not changed much since that time. A survey conducted by the independent (and often openly antigovernment) Levada Center in 2014 revealed that 17 percent of Russians are satisfied with the current system and 22 percent would like to see Russia transformed into a Western democracy, while almost 40 percent support remaking the “Soviet political system.” This trend becomes even more pronounced in the economic realm: 51 percent would opt for “a Soviet-like system of state planning and distribution,” while only 29 percent expressed a preference for a market economy. As the economic crisis deepens in Russia, a 2016 survey revealed that 58 percent of Russians, a sizable majority, longs for the restoration of the Soviet system.

While many in the West have been skeptical of the Russian poll results, a recent study conducted by prominent Russia experts, including Timothy Frye of Columbia University, shows that the survey results generally reveal the true attitudes and genuine preferences of the Russian electorate. Indeed, while Vladimir Putin has been named the West’s public enemy number one, Western observers often conveniently forget that he has kept communists at bay in contemporary Russian politics.

Of course, the democratic return of communism is not inevitable, and several measures may be taken to deter a “Soviet Reunion.” In postrevolutionary Ukraine, for instance, the Poroshenko regime introduced a controversial law (the so-called lyustratsiya or “purification” policy) that outlawed the activities of the Communist Party and its supporters. By adopting such a measure, however, Ukraine ironically inched closer toward Soviet-style democracy, where the government determined and enforced the boundaries of acceptable political debate. If liberalization ever takes place in Russia, do we then tell the Russians that they are “free” to choose anybody but Putinists, communists, nationalists, tsarists, conservatives and so on? Such limitations would constitute a “managed democracy” of the sort inherently antithetical to liberal political values and the freedom of choice. So far, the West has been reluctant to acknowledge that free and fair elections might well empower antiliberal forces. Populism in Europe is worrisome, but populism in a democratized Russia may bring about a deadly result from which there is no turning back.

Let us imagine a slightly rosier second scenario, where we somehow manage to contain the surge of illiberal forces in a democratized Russia. Liberalism blossoms on the streets of Moscow as well as the shores of Vladivostok, while a reborn Russia proudly transforms itself into a democratic oasis in the heart of autocratic Eurasia. Such a transformation may diminish the prospect of conflict between Moscow and Brussels; however, it would also throw Russia’s intra-regional relations into perpetual crisis.

Given Russia’s historical insistence on its great-power status, a liberal democratic Russia would be far more likely to behave like value-imposing America than power-shy Germany. Indeed, Anatoly Chubais (one of the leading liberal reformers) passionately advocated in 2003 for transforming Russia into a liberal’naya imperiya (liberal empire)—a great leader of the “free” Eurasian region bearing special responsibility to fight for the democratic remaking of the post-Soviet space. Indeed, this vision is well acknowledged by many other opposition activists, including Russia’s anti-Putinist-in-chief Alexei Navalny, who has branded himself a “liberal nationalist” who pledges to restore Russia’s exceptional greatness.

As the theories of liberal foreign policy forecast, liberal imprudence may emerge as a key hallmark of new Russian foreign policy. A liberal Moscow would not turn a blind eye to the rampant authoritarianism in its backyard. Instead, it would be far more likely to rebrand itself as a hegemonic regime transformer that capitalizes on its military superiority in defense of freedom and human rights, even at the expense of Western interests.

In this hypothetical case, Russian’s own experience of liberal transformation, coupled with the presence of Russian-speaking minorities in the post-Soviet states, would form a substantial justificatory basis to claim a “license to intervene” across and beyond the region. These endeavors may well extend to the Baltic states, whose governments are perpetually accused of systematic mistreatment of Russian minorities. In short, the construction of a liberal democratic Russia would not necessary pacify Moscow’s foreign-policy orientations. On the contrary, it may well drive the rise of a more interventionist Moscow galvanized by a messianic worldview and liberal adventurism.

In the most optimistic third scenario, a liberal transformation may fully “Europeanize” Kremlin elites, such that the use of force becomes an unthinkable foreign policy option. A liberal Moscow willingly internalizes “universal” European values and EU regulations. The once-distant dream of constructing a Euro-Atlantic community rapidly emerges as a political reality within our grasp. This seems to be what Western policymakers are ultimately hoping for.

Under such a scenario, however, Russia’s accession to NATO and the EU would emerge as an inescapable question. Liberalized Russians would wonder: if our values are fully synchronized, why is Russia still excluded from European decisionmaking processes? Why is Russia still a rule taker, rather than an active rule maker helping to manage the “common European house”?

At this point, Brussels would face a defining moment in the history of European integration. Welcoming Russia as a full-fledged member of the liberal society would certainly advance the cause of a lasting continental peace, but this option comes with formidable economic and social burdens. On top of extensive financial assistance necessary to keep the volatile, resource-dependent Russian economy afloat, Europe would face an influx of highly skilled Russian workers into its already crumbling common labor market.

If Europe refuses to wholeheartedly embrace a liberal democratic Russia, however, the sentiment of exclusion and alienation would inevitably fuel the rise of nationalistic forces in Russian politics. Indeed, this was precisely how Viktor Yanukovych managed to revive his political career in Ukraine after the Orange Revolution. The winning message of his presidential campaign in 2010 was, in essence, Europe gives you dreams—I give you cash and stability, successfully luring Ukrainian citizens disillusioned by the European dreams shining from afar.

While I have nothing against enlarging global shared peace and prosperity, the scenarios analyzed above offer a plea for caution. Democratization is unlikely to solve many of the longstanding issues in the West’s relations with Russia. A liberalized Russia is unlikely to turn Europe into a political Disneyland. Under the present conditions, liberalization of the Russian political arena would run the grave risk of amplifying the voice of illiberal forces. As the central European cases have taught us, democracy can become a powerful tool for the ascendance of illiberals, and we know little about how to remedy this problem without compromising core democratic values (that is, without simply criminalizing illiberal political organizations). Hence, scope conditions about the “democratic rise of illiberalism”—i.e., how and when democratic mechanisms may serve to accelerate the rise of illiberal and authoritarian trends—should be closely investigated by both policymakers and the academic community.