Why the West Should Be Ashamed about Ukraine 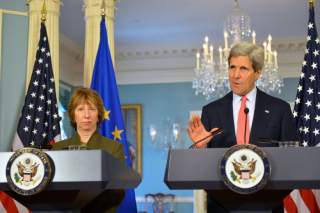 Over the course of events that have transpired during the Ukraine crisis, there have been unwarranted provocations from Moscow, bouts of violence in eastern Ukraine, illegal referenda (and one annexation) and incessant finger pointing in all different directions. But one place at which everyone’s fingers should be pointed is Brussels.

Essentially, what the European Union has done is created a mess that it is unwilling to clean up. What’s worse is that it has not publicly owned up to its share of the fault (a large share at that) for the crisis in Ukraine and Putin’s adventurism. Much of the discussion on this topic has focused on the shortcomings of the Obama administration, punishing Putin, whether NATO expansionism led to where U.S.-Russian relations stand today, and so forth. While these are all valid sands in which to anchor debate, one topic that deserves more attention is the future of U.S.-European relations.

In terms of NATO, if Putin’s land grabbing were to continue or his attention were to turn towards Estonia or Lithuania, NATO would be obligated to get involved militarily. While it is unlikely that Putin is reckless enough to do anything forceful in these countries, the fact that it has even become a possibility is cause for concern. However, if the EU’s unwillingness to do more to punish Putin for perpetuating instability in Ukraine is indicative of how it would act if the situation in Ukraine or Eastern Europe became more dire, then Obama should think seriously about how closely the United States wants to remain aligned with Europe. In terms of NATO, Obama would need to think about how involved the United States should be in European security and defense. This is a European mess, started on Europe’s turf, by the EU.

Putin was right when he stated in his annexation speech that Crimea has historically and culturally been more aligned with Russia. He is right when he describes Ukrainians and Russians as brothers. Russia and Ukraine have histories that are deeply intertwined, dating back to tenth-century Kievan Rus’. Ukraine was in Russia’s sphere of influence for many, many years (debatably, it still is, to a certain extent). It is for these reasons that the EU should have expected pushback from Russia when it decided to pull Ukraine in the direction of Western Europe.

Regardless of a strong desire in western Ukraine to establish closer ties with the EU, the EU should not have tried to extend its influence into Ukraine. A Deutsche Welle survey showed a hefty percentage of Ukrainians were hesitant to sign an association agreement with the EU, and a large percentage also wanted to enter Putin’s customs union as well. As the unrest in eastern Ukraine has demonstrated, there are clearly many Ukrainians who did not want the EU association agreement to be signed.

All of that said, Putin’s actions in Ukraine have been morally questionable at best—but they should not have come as a surprise.

What is most disappointing about the EU’s decision to go through with the Ukraine deal last fall is that Germany actually expressed apprehension about the deal (albeit apprehension not based on concern about provoking Russia) but did not try to quash it, Obama lacked reservations about the deal, and Poland and Lithuania strongly supported the deal.

Many Western European countries have been and are against EU expansion. However, most likely in an effort to appease Poland and Lithuania’s desire to bring Ukraine into the fold, those countries caved.

Ironically, Poland and Lithuania should have been apprehensive about signing the deal, given that it would have undoubtedly evoked a strong response from Putin. Were they banking on Germany and France to help them (fat chance), should Russia become aggressive? Were they banking on the United States, aka NATO? Had EU members even thought about the possible ramifications of meddling with Ukraine? If they had, did the possibility of a strong Russian response simply not occur to them?

If the tables had been turned, and Russia had decided to back-handedly attempt to draw a historically European country into its sphere of influence, the EU would have been up in arms, complaining about Russian aggression—oh wait, that sort of happened. The difference is that Crimea is not historically European. From this perspective, Putin’s annexation of Crimea actually makes more sense than the EU’s attempted “soft annexation” of Ukraine.

So why, then, do the Europeans seem so shocked that Moscow responded by annexing Crimea? Again, this does not mean Putin’s actions were justifiable. But the Europeans poked and prodded a cunning, nationalist leader, which led to the perfect opportunity for him to make a move that would boost his popularity domestically, help him maintain military influence in the Black Sea and regain a territory that is historically Russian.

This brings us back to the issue of NATO involvement in European security. When European nations, under the security blanket of NATO’s Article 5, decide to make poorly-thought-out foreign-policy decisions that risk antagonizing large, influential powers like Russia, when does the United States decide that its role in NATO goes against America’s national interest? The purpose of NATO should not be to bail out the Europeans when they push Russia’s buttons and then fail to adequately punish Putin themselves.

While the EU could stand to lose a lot in the short-term by boycotting Russian energy, this is precisely what it should do. The EU (namely, Germany) has been trying to explore options for diversifying its energy sources for years. Now is its chance to do it. Perhaps the Ukraine crisis is a wake-up call to the fact that no country—not Russia, Algeria, Norway or anyone else—should ever have that much economic leverage over the European Union.

While some might point out that Putin didn’t get involved in Ukraine until the interim government in Kiev came to power after overthrowing Yanukovych, this is not an indication of the moment at which it occurred to Putin to push back against the EU. This is simply the moment at which it was most convenient for him to swoop in and take advantage of Ukraine’s instability. His objection to the EU’s trying to bring Ukraine into its sphere of influence started much earlier in 2013 when that association agreement was put on the table—and everyone knew it. Regardless of when Putin actually took action, the resentful feelings existed long before Russia’s annexation of Crimea.

Furthermore, the United States should have known better than to be in favor of the deal, given the fact that it severely undermined Russia not just politically and culturally, but also economically. Putin had his own customs union in the works with Belarus and Kazakhstan; he needed Ukraine to be a part of it, and the EU deal would have prevented that from happening.

If both the United States and the EU are content with the parameters of the Transatlantic Trade and Investment Partnership, then there is no reason not to continue with negotiations. Maintaining Europe as a strong trade partner would still be in the United States’ best interest. However, if the United States is going to continue to back Europe militarily, the EU should try harder to avoid conflicts with major powers that would ultimately call for U.S. involvement.

And in the future, Washington should be more careful about which EU agendas it supports, especially those agendas that risk drawing countries like Russia into unnecessary conflict with the West.

Rebecca M. Miller is an assistant editor at The National Interest. She tweets at @RebecMil.