Why in the World Does Turkey Want an Aircraft Carrier? 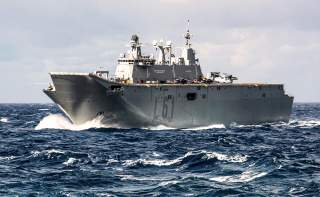 Upon overseeing the launch of a domestically-built corvette in July 2017, Turkish Pres. Recep Tayyip Erdogan voiced his country’s goal of building “our own aircraft carriers” as part of Ankara’s efforts to “become independent in the field of defense by 2023.”

“We must move even faster,” Erdogan declared. “We are proud of our ability to build military ships, especially construction of submarines.”

Erdogan’s remark isn’t necessarily far-fetched. It comes more than a year after Turkey began construction on the TCG Anadolu, an amphibious assault ship based on Spain’s Juan Carlos I. This light aircraft carrier, which Turkey aims to launch in three years time, will eventually become the flagship of the Turkish navy and may even carry six F-35B Joint Strike Fighters, which can take off and land vertically.

Turkey already has plans to become an F-35 operator and may well purchase these variants.

The backdrop to these plans and Erdogan’s pronouncements are of Turkey trying to project power in the region and beyond. Turkish soldiers are presently stationed in the Persian Gulf in the tiny sheikdom of Qatar. Turkey has built a base in Somalia to help train the national army there to combat the Al Shabaab group, and has troop deployments in Iraq and Syria.

Turkey’s rival Egypt is the only country in the region to possess flattops, albeit French Mistral-class amphibious assault ships. Egypt purchased these vessels from France in 2015, giving it a heavy-lift capability which few countries in the world can boast.

The ships have yet to see any actual combat or deployment far from Egypt’s shores. Furthermore, they cannot operate warplanes like the Juan Carlos I or the Anadolu can.

A highly dubious report in 2015 even suggested that Israel sought to purchase “a modern aircraft carrier,” without specifying the class, from the United States. Possession of a carrier would enable Israel to project naval and air power against rivals, namely Iran, far from its own shores. While Israel is often described as an immovable American aircraft carrier, it’s quite unlikely to possess an actual carrier of its own anytime soon.

Iran also claimed, in December 2016, that its military has plans to join the exclusive club of carrier-operating countries.

“Building an aircraft carrier is also among the goals pursued by the Navy and we hope to attain this objective,” Adm. Peiman Jafari Tehranip, Iran’s Deputy Navy Commander for Coordination, told the country’s semi-official Fars News Agency in December 2016.

Incidentally, the Shah of Iran’s naval ambitions are quite similar to Erdogan’s ones today. He sought not only to make Iran the dominant power in the Persian Gulf, but a major naval power in the Indian Ocean, alongside the navies of Australia and South Africa.

Awash with money following the oil crisis of the 1970s, the Shah manically splurged on all branches of his military with the aim of elevating Iran into a leading regional and international power.

Iran intervened in conflicts in neighboring countries, most notably Iraqi Kurdistan and Oman. The Shah even went so far as to assert that his aim was to make the Iranian military “probably the best, non-atomic.” The 1979 Iranian Revolution abolished those plans.

Similarly, Erdogan’s efforts to make Turkey into a regional and world military power by building and operating expensive hardware could backfire since it’s being done while the domestic political situation in Turkey—which has become increasingly authoritarian and repressive—continues to deteriorate following the July 2016 coup attempt.

In recent months, the only aircraft carriers to enter the seas near the Middle East aside from American ones—whose carrier fleet has no peer—were France and Russia’s lone carriers.

France’s Charles de Gaulle is a highly formidable flagship, capable of carrying 40 advanced Dassault Rafale multi-role fighter jets, of the kind major Middle East countries can only dream of either producing or purchasing. Russia’s Admiral Kuznetsov, while often ridiculed for its many deficiencies does nevertheless keep Moscow in the club of countries capable of projecting significant military power beyond its frontiers.

It’s a club Turkey earnestly hopes to join in the foreseeable future—although on a relatively smaller scale with TCG Anadolu.