Why the World Should Fear China's Military (Exports) 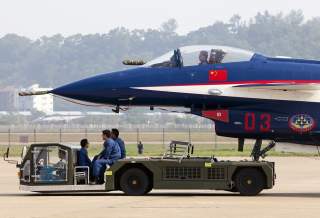 Is China’s arms export strategy really a success story? The first question is to establish whether there has been dramatic growth in China’s arms exports, emulating the success of its broader commercial exports. While the picture is not equivocal, there are signs that something is indeed happening.

Chinese arms sales are growing. Across 2012–16, they accounted for 6.2 per cent of the global arms trade, up by an impressive 74 per cent compared to 2007–11. In fact, over 2012–16, China’s arms exports raced ahead of those from Germany, France and the United Kingdom, making China the world’s third biggest arms exporter.

This is not a short-term aberration, but a long-term trend. Between 2000 and 2015, Chinese arms exports expanded by a factor of 6.5. In 2016, China shipped US$2.1 billion in arms, marginally behind France’s US$2.2 billion, but well ahead of the United Kingdom’s US$1.4 billion. While China’s 2016 market share is well below that of the United States at 33 per cent, the gap is gradually closing with Russia (23 per cent), and has disappeared altogether with France (6 per cent), Germany (5.6 per cent) and the United Kingdom (4.6 per cent).

China’s arms exports have been criticised for lacking global appeal since 72 per cent of all exports in the last five years went to just three countries: Pakistan, Bangladesh and Myanmar. Yet, this criticism is unfair. Such dependence on a few core customers affects both mature and ‘new entrant’ arms exporters alike.

Russia was the world’s second biggest arms exporter across 2012–16 but relied on just four countries — India, Vietnam, China and Algeria — for 70 per cent of those sales. Likewise, 71 per cent of UK arms exports go to India, the United States and Saudi Arabia (which alone accounted for half of all UK sales across 2010–15).

Detractors argue that China’s weapons are only attractive to poorer nations because its older weapons are cheaper. While there is some truth in this argument, it needs qualification. China has been successful in diversifying its customer base and now exports arms to 55 countries worldwide, covering Asia, the Middle East, Africa and Latin America. Many of China’s clients are indeed developing countries. For example, two-thirds of the countries situated in the world’s poorest continent, Africa, procure weapon systems from China, and much of it is basic military equipment.

But times are changing. Chinese arms are no longer relics from a bygone Soviet era. The PLA has been replacing old Soviet platforms with improved ‘indigenous’ models and is now exporting modernised platforms, including Type-99 MBTs, J-10 fighters and Yuan-class submarines to Thailand, Myanmar, Bangladesh and Pakistan.

China has also adapted, innovated and engaged in systems integration in a determined bid to move up the technology ladder, developing, for instance, credible and competitive unmanned aerial vehicles (UAVs) and anti-ship cruise missiles. Raised technological sophistication combined with relatively low procurement cost has led to increasingly cost-effective arms exports. Their attractiveness to more discerning buyers has been translated into a sales portfolio in which 25 per cent of China’s customers are now positioned in the upper middle/higher income country categories, including Turkey, Saudi Arabia and the United Arab Emirates.

Is there something different, something special, that distinguishes China’s arms export strategy from its Western counterparts? The answer is a resounding yes. First and foremost, Western strategists should not be under any illusion that export revenue is the primary goal. Rather, Beijing’s end-game is longer-term geo-political and strategic influence. The search for regional and global influence is the critical aim of Chinese economic diplomacy. It reflects a more narrowly focused aspect of Beijing’s soft power framework, embracing foreign aid, foreign direct investment, overseas educational programs and, importantly, arms sales.

China’s arms export model operates according to a carefully-crafted strategy based on three principles: promoting the legitimate self-defence capability of the recipient country; strengthening the peace, security and stability of that country and region; and non-interference in its internal affairs.

Beijing’s long-standing approach of linking non-interference to arms sales rests on the view that a customer’s political, military and human rights record lies outside the contractual arrangements. The ‘no questions asked’ policy attracts the opprobrium of Western states, but there is no disputing its effectiveness in selling guns and securing influence. The policy particularly appeals to second- and third-tier military states suffering excessive dependence on US or Russian weaponry. Chinese arms offer poorer states the opportunity to diversify arms sources, regain a degree of sovereignty over military capability and reduce strategic vulnerability to arms embargoes.

The Chinese arms export model has several other significant features. From a Chinese strategic perspective, it leverages strong client-state relationships and in the process bolsters Beijing’s influence, particularly among neighbouring states. It is no accident that China’s arms sales to Pakistan, Sri Lanka, Bangladesh and Myanmar indirectly act to contain the potential threat of Asia’s other mega-power, India. Chinese arms are also competitively packaged. Pricing is low compared to Western models. Chinese drones, for example, reportedly cost 10–20 per cent of the near-equivalent US version. Finally, China is amenable to technology transfer through defence offset, supporting client states to indigenise maintenance, repair and overhaul activities and even produce components.

While it may not yet be the dominant player, China’s arms export strategy has proved effective in taking market share from competitor nations. China has also begun to encroach into higher income markets, especially where technological sophistication is not required. There is a long-term strategy at work here, driven by diplomatic and geostrategic objectives, not commercial gain.

Ron Matthews is Chair of Defence Economics at the Centre for Defence Management and Leadership, Cranfield University and the Defence Academy of the United Kingdom.

Xiaojuan Ping is a researcher at the East Asian Institute, National University of Singapore.