Why the World Should Fear North Korea's Biological Weapons 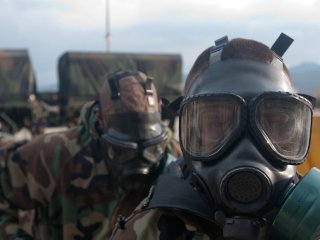 While the world might be worried about all things North Korea—especially its growing nuclear weapons arsenal—Pyongyang very likely has other nasty weapons of mass destruction that, given the right conditions, could be just as lethal.

What most refer to as biological weapons—stuff right out central casting that always make those ‘end of the world’ movies all so good—might just be North Korea’s real weapon of war to fear.

While they certainly don’t get as much attention as atomic bombs or chemical weapons such as Sarin, biological weapons can kill hundreds of thousands of people, and maybe even millions if deployed over a wide enough area. While exact facts and figures aren’t perfect, there is strong evidence to suggest Pyongyang could possess anthrax weapons as well as possibly cholera, plague and even smallpox. And now that North Korea’s missile arsenal is becoming ever more sophisticated by the day . . . well, you get the idea.

But developing such deadly agents in a controlled lab and deploying them in a war are totally different ball games. To give one a guide on how this could work, a recent report by the RAND corporation lays out the frightening details. And as you will see very quickly, it would not take much to kill thousands and spread mass panic:

“Indeed, North Korea special forces are a likely means for delivering North Korean biological weapons. North Korea has some 200,000 special forces, a small fraction of which could deliver devastating biological attacks against South Korea, Japan, and even the United States. North Korea could use biological agents in isolation, perhaps as an escalated provocation in which it seeks to infect a limited number of people, or it could use biological agents as the leading edge of an invasion of the ROK, hoping for thousands or even more infections to weaken the ROK’s defenses and will to fight. Biological weapon use in the latter context is particularly worrisome.”

From there, things could go from bad to worse:

“North Korea could use biological weapons against a variety of military and civilian targets in South Korea. Biological weapons would likely be delivered as an aerosol of some kind that would be dispersed and then carried by the wind. Many people downwind of the release location would be exposed unless they wore some form of protection or were physically located in a place that protected them from exposure. This is particularly true if the attacker creates a line source by spraying, for example, the BW agent while driving along a road perpendicular to the wind. According to one source, 1 kilogram of anthrax could spread lethal effects over 0.2 to 2.6 square kilometers, depending on wind and weather conditions. The nighttime population density of Seoul averages about 20,000 people per square kilometer, meaning that upward of about 50,000 people could be effectively exposed by 1 kilogram of anthrax. But in conditions less favorable to the attacker, including poor atmospheric conditions and many people living in high-rise buildings that lack central heating and ventilation, as few as 2,000 people might be effectively exposed by 1 kilogram of anthrax. Multiple attacks could increase these results.”

Biological weapons combined with chemical and nuclear weapons attached to long-range missiles would give Kim Jong-un the devastating military tools needed to kill millions of people—and hit the U.S. homeland. Food for thought every time the world’s attention turns to the Korean peninsula.