Why the World Should Fear North Korea's Type 73 Machine Gun 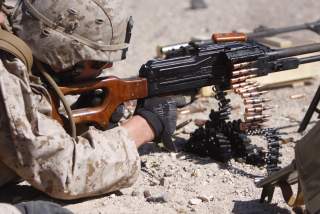 Not surprisingly, many of the machine guns ended up with other armed factions, including Christian Babylon Brigades, according to Armament Research Services, another independent monitoring organization. It is entirely possible that many of the weapons changed hands more than once in the fighting with Islamic State terrorists. By March 2016, Type 73s had spread to Syria and Yemen. Again, Iran seemed to be the link connecting everything together.

Between February and March 2016, Australian and French sailors in the Arabian Sea seized small ships — or dhows — smuggling weapons, most likely to militants in Somalia and Yemen. These caches aboard the dhows included examples of one particularly rare firearm, the North Korean Type 73 machine gun.

In November 2016, independent monitoring group Conflict Armament Research released a report detailing the captured weapons and their likely points of origins and destinations. According to the analysis, the shipments showed links between Iran and armed groups Tehran supports in the Gulf of Aden region.

“The presence of large consignments of weapons on board the dhows, a significant proportion of which were manufactured in Iran … suggests that Iranian entities may have been involved in the supply of these weapons,” the researchers concluded.

“Furthermore, the presence of materiel in Yemen with matching lot numbers and displaying the same serial number sequence … supports the assertion that materiel on board the dhows was ultimately destined for Yemen, and likewise, that the materiel recovered in Yemen probably originated in Iran.”

But it may be the odd North Korean guns that are actually the clearest indicator of an Iranian connection. Since 2015, these weapons have been turning up on battlefields from Yemen all the way to Iraq.

The Type 73 is an intriguing design, virtually unheard of outside North Korea. Little information about the gun’s origins has escape the reclusive communist country.

“Even within the mist of secrecy regarding North Korean firearms, the Type 73 is still clouded in mystery,” Dan Shea and Heebum Hong wrote in Small Arms Defense Journal in 2013. “Refugees who escape North Korea via China sometimes have information, but that information might have some problems.”

From what details and images are available, the approximately 23-pound gun appears to be a hodgepodge of ideas taken from various Soviet and Warsaw Pact designs. The Type 73 blends the basic layout of the Russian PKM with the feeding system from the Czechoslovakian Vz.52.

The arrangement allows gunners to load the weapons with belts of ammunition or large magazines. When fitted, the magazines stick out of the top, giving the firearms a distinctly dated appearance.

Unusual for a machine gun, the Type 73 has a special barrel attachment so soldiers can fire rifle grenades. With this feature, it is not entirely clear what role the North Koreans envisioned for the gun.

What we know is that officials in Pyongyang were not particularly impressed with the result of this local development project. By 1982, North Korean weaponeers had cooked up a second gun — the Type 82 — that was much closer to a standard PKM.

“It seems that many Type 73s were moved to reserve or militia service, but nobody can be sure,” Shea and Hong noted. “While it could sometimes be seen in 1970s propaganda and at military parades, from the early 1980s it’s been more and more difficult to see one in use.”

So how did they get to the Middle East and East Africa? That’s where Iran comes into the picture.

Desperate for arms to defend itself and suddenly cut off from U.S. defense contractors, the fledgling Islamic Republic reached out wherever it could for support. Then, in September 1980, Iraq invaded and plunged both countries into a brutal war for nearly a decade.

The new government in Tehran purchased supplies of everything from tanks to anti-tank missiles to guns from North Korean arsenals. This included a significant number of Type 73s.

In the years that followed, Iranian factories made improvements and built copies of many of the designs. Conflict Armament Research told War Is Boring that they described the captured examples as “unidentified” because analysts couldn’t figure out for sure if they were actual North Korean guns or Iranian clones.

After the bloody conflict ended in 1988, the Iranian military apparently put most of the guns in warehouses for some future use. Fast forward more than two decades later and the weapons managed to get a new lease on life.

In May and July 2015, Shia militias in Iraq posted pictures on social media of fighters holding the odd guns. Iran actively supports these groups, many of whom are now grouped together under the umbrella of the Iraqi government-sanctioned Popular Mobilization Forces.

Not surprisingly, many of the machine guns ended up with other armed factions, including Christian Babylon Brigades, according to Armament Research Services, another independent monitoring organization. It is entirely possible that many of the weapons changed hands more than once in the fighting with Islamic State terrorists.

By March 2016, Type 73s had spread to Syria and Yemen. Again, Iran seemed to be the link connecting everything together.

Though an official connection is less obvious, Iran definitely sees Houthi rebels in Yemen as valuable friends. Since March 2015, the Zaidi Shia group and its allies have been fighting a much larger and better equipped Saudi Arabian-led coalition.

If Iran is indeed the source, officials probably chose to ship the weapons in the first place simply because they were available. Since the guns use the same cartridges and ammunition belts as the much more common PKM, militants would have little trouble using the Type 73s.

There is no evidence of militiamen or rebels using the awkward magazines. Otherwise, the machine guns aren’t a good choice for anyone looking to hide the point of origin.

Outside of Iran, North Korea and these new battlefields, the South Korean military has the only other known example of the weapon. There is also a possibility that North Korean advisers brought some examples to Zimbabwe in the 1980s.

Soon, the uncommon Type 73 might become much better known to military experts and independent observers. As the fighting in Syria, Iraq and Yemen grinds on, the machine guns might end up a much more common sight in the Middle East and East Africa — and maybe beyond — with or without any direct connection to Iran.