Why There Is No Chance a Piece of Paper Will Ban Nuclear Weapons. Zero. 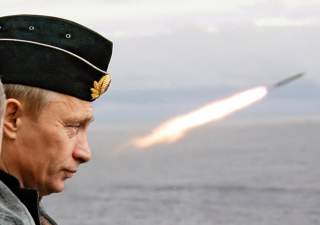 Earlier this month, the Norwegian Nobel Committee awarded the Nobel Peace Prize for 2017 to the International Campaign to Abolish Nuclear Weapons (ICAN). But is the group’s doing more harm than good?

The ICAN group has worked tirelessly to bring the Treaty on the Prohibition of Nuclear Weapons to fruition—which is an effort to legally ban nuclear weapons—to fruition. The United States government, however, believes that the entire effort is counterproductive.

Washington believes that the ban treaty ignores “the crucial role that nuclear deterrence plays in preserving and protecting international peace and security, and the potentially catastrophic consequences were deterrence’s restraining effect to be removed while it still remains necessary,” Robert Wood, the U.S. Ambassador to the U.N. First Committee said during an October 12 speech at the United Nations.

The United States continues to support the goal of nuclear disarmament, but it does not believe the nuclear weapons ban is a good idea and that it will actually makes things worse.

“Its obligations are vaguely worded, imprecise, and sometimes internally contradictory, while offering only an empty shell for verification,” Wood said.

“Worse, it is fundamentally at odds with today’s security challenges. It is not simply an unproductive instrument; it is likely to be a counterproductive one, with the potential to cause lasting harm to the nonproliferation regime and to the cause of disarmament alike.”

One of the fundamental issues that the United States takes with the new treaty is simply a matter of reality. The treaty does not take into account the need for nuclear deterrence.

“The ban treaty is based on the premise that addressing crucial international security issues is not necessary for disarmament,” Wood said.

“Ban treaty proponents would have us believe that we can do away with nuclear deterrence despite - to cite just one example - the danger posed by North Korea’s relentless pursuit of nuclear weapons and associated delivery systems, which stand in flagrant violation of international law.”

Nor does the nuclear weapons ban have any verification method built into the document.

“The Treaty does not contain a credible verification mechanism, demurring on the issue almost entirely,” Wood said.

Indeed, none of the planet’s nuclear powers have signed the treaty. Earlier in the year, France and Great Britain joined the United States in condemning the nuclear weapons ban.

“This initiative clearly disregards the realities of the international security environment,” the three Western powers stated jointly on July 7.

“Accession to the ban treaty is incompatible with the policy of nuclear deterrence, which has been essential to keeping the peace in Europe and North Asia for over 70 years. A purported ban on nuclear weapons that does not address the security concerns that continue to make nuclear deterrence necessary cannot result in the elimination of a single nuclear weapon and will not enhance any country’s security, nor international peace and security. It will do the exact opposite by creating even more divisions at a time when the world needs to remain united in the face of growing threats, including those from the DPRK’s ongoing proliferation efforts.”

Proponents of the treaty nonetheless hope that the ban will have a positive impact.

“The Treaty is an important step towards the universally-held goal of a world free of nuclear weapons. It is my hope that it will reinvigorate global efforts to achieve it,” UN Secretary-General António Guterres said on Sept. 20.

The Nobel Committee is aware that the ban treaty will not actually help to eliminate even a single nuclear weapon.

“The Norwegian Nobel Committee is aware that an international legal prohibition will not in itself eliminate a single nuclear weapon, and that so far neither the states that already have nuclear weapons nor their closest allies support the nuclear weapon ban treaty,”the  committee stated.

“The Committee wishes to emphasize that the next steps towards attaining a world free of nuclear weapons must involve the nuclear-armed states.”

However, nuclear-armed states have little real interest in giving up their weapons. It’s not just the United States, France and Britain that see their nuclear weapons as their ultimate trump cards; the Kremlin maintains a formidable nuclear arsenal to ensure the survival of the Russian state.

Russia is highly unlikely to ever consider giving up its nuclear arsenal. Indeed, the Kremlin—to offset its conventional weakness—renounced the Soviet Union’s nuclear no-first-use policy in 1993. Moscow’s security policy allows for the use of nuclear weapons “in response to the use of nuclear and other types of weapons of mass destruction against it and/or its allies, as well as in the event of aggression against the Russian Federation with the use of conventional weapons when the very existence of the state is in jeopardy.”

On the other side of the world, the People’s Republic of China—long an outlier amongst the great powers for maintaining a minimal nuclear deterrent—is now working on improving and modernizing its strategic forces.

“China appears to be moving away from an approach to deterrence that deems the ability to impose some risk of a second strike sufficient,” reads a recent RAND report. “It is moving toward a more calculated strategy of assured retaliation.”

Thus, the goal of a world free of nuclear weapons will remain a fantasy for the foreseeable future.