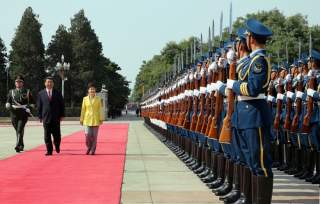 Many Western observers are likely to raise their eyebrows tomorrow when they see that South Korea’s President Park Geun-hye is standing alongside Xi Jinping and Vladimir Putin on the reviewing stand at Tiananmen Square to mark China’s newly established holiday commemorating the end of World War II (WWII). As China’s next-door neighbor and a military ally of the United States, Park may seem to be a big catch for Beijing, which has been lobbying hard for the attendance of Park and other leaders of countries that experienced Japanese aggression during WWII. Some critics have already suggested that Park’s visit is evidence that South Korea cannot resist the growing centripetal pull of Beijing’s orbit. But Park’s presence alongside Xi is less about Park being snared by Beijing than it is about Park pressing to consolidate China’s support for Korean unification in the context of unprecedently weak ties between Beijing and Pyongyang.

Despite marathon inter-Korean negotiations to pull back from an escalating military conflict less than two weeks ago, Park’s policy of Trustpolitik has hardly engendered much trust in the inter-Korean relationship. Red Cross talks scheduled for next week may break down, if they are held at all. Inter-Korean family reunions could be upstaged by a future North Korean provocation, in the form of a missile launch or a nuclear test.

But one striking outcome of the inter-Korean talks is that North Korea under Kim Jong-un has now logged far more intensive high-level interaction with Seoul than with Beijing. This marks a major change from North Korea’s diplomatic strategy under Kim Jong-il, who assiduously cultivated relations with Beijing as a counter-weight to dependency on Seoul. Even prior to the historic June 2000 inter-Korean summit, Kim Jong-il made a pilgrimage to Beijing before hosting Kim Dae-jung in Pyongyang.

Xi Jinping has made his displeasure with Kim Jong-un known by visiting Seoul but not yet Pyongyang, but he has not yet embraced strategic coordination with Seoul at the expense of Pyongyang, at least not at the level that South Korea has always sought to achieve. One of South Korea’s main strategic rationales for pursuing normalization of diplomatic relations with Beijing in 1992 was that a stronger relationship with Beijing would complement South Korean efforts to improve relations with Pyongyang, a policy formulated by Park’s predecessor Roh Tae-woo known as Nordpolitik. (Nordpolitik, by name if not in spirit, provides a clear precedent for many elements of Park’s Trustpolitik.)

From this perspective, Beijing’s wooing of Park appears to have been tailor-made opportunity for South Korea to pursue its longstanding objectives. Taking advantage of a sumptuous welcome, Park expressed gratitude for Beijing’s “constructive role in defusing [recent] tensions on the Korean peninsula” in a banquet with Xi on the eve of the parade, and joined with him to urge North Korea to refrain from renewing tensions through nuclear and missile provocations and to return to the six-party denuclearization talks.

Sino-ROK normalization has brought enormous economic and trade benefits to both countries, but over two decades of ever-closer “partnership” between Beijing and Seoul, South Korea has never gained the level of strategic support from Beijing that it has desired as leverage in dealing with North Korea. To fill the space left by Kim Jong-un’s absence is, for South Korea, an important step toward gaining Beijing’s blessing for the holy grail of Korean unification that Seoul has sought for over two decades. In this respect, Park’s presence may be perceived less as a big catch for Xi than a lure through which Seoul hopes to finally hook Beijing.

This piece first appeared courtesy of CFR and Forbes.