Why Trump Blasted the 'Out of Control' F-35 Program 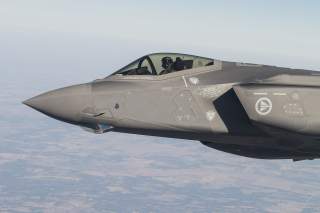 A wave of anxiety washed through the civil-military industrial complex when President-elect Trump tweeted that the F-35 program was “out of control,” and that he intends to save billions of dollars on military and other purchases after January 20. Many wondered if the sand was shifting beneath the troubled fifth-generation fighter program.

It’s not. After years of well-intended but ill-advised meddling, the F-35 is now on solid ground.

That said, it is important to understand what gave the F-35 its poor reputation, how well the program is doing now, and how “friction” has been critical in bringing it back on track.

The Best of Intentions

In 1992, Defense Secretary Dick Cheney knew the services needed to replace their aging strike assets, but he was concerned with the cost of separate Navy and Air Force development programs. He directed the Navy Advanced Attack and Air Force Multi-Role Fighter programs to merge into a single effort, now known as the Joint Strike Fighter or JSF. In 1995, Congress piled on to the drive for efficiencies by merging the Marine Corps’ AV-8A “Harrier” follow-on development program into the JSF.

Prior to the forced marriage, each service had clarity on what it needed for its replacement platforms. Now, however, they were bundled together in a highly ambitious program tasked with replacing the capabilities and capacity associated with five very different aircraft, operating in at least as many different environments. The Bush administration’s overreach for efficiencies, coupled with those of Congress, set the stage for the subsequent F-35 program delays—delays that would be exacerbated by an explosion of technological advances.

In 1995, technology was progressing so rapidly that it would be hard to field a jet that was not already approaching obsolescence. To overcome that challenge, the Defense Department agreed on a revolutionary approach to development: it would move to acquire a system even as many parts of the aircraft were still undergoing some level of research and development.

Component, sensor and airframe development were all happening at the same time. The three different versions of the jet (the Air Force’s conventional takeoff and land F-35A; the Marines’ short takeoff, vertical land or STOVL F-35B; and Navy’s carrier based F-35C) drove very different airframe requirements. Even small changes in the weight, size, performance, or schedule of any component could affect the performance, schedule and cost of all three variants.

That is exactly what happened in 2004, when the F-35B, the STOVL variant, came in more than two thousand pounds over program weight specifications. A significant change in airframe design and added thrust brought the F-35B back into compliance, but the eighteen-month delay affected all three jets and increased program cost by more than $6 billion.

With all the requirements surrounding the three different variants, the risk of costly delays was known and only extraordinary leadership could have mitigated it. That should have been a priority for this critical program, but it wasn’t. In its first eighteen years of existence, the JSF/F-35 program office had nine different executive directors—one every two years. No matter how bright an individual may be, it takes at least a year to become familiar with a program of that size, much less enable well-informed hardball with the associated vendors to keep it on time and under budget.

Ultimately, the delays and cost overruns of the F-35 program aroused the ire of Defense Secretary Robert Gates. He applied enough “friction”—direct personal attention and hard-nosed direction to the services—until the Air Force put Lt. Gen. Chris Bogdan in charge of the program, and kept him there. In his four years at the helm, Bogdan has turned the program around, proving once again that competent, stable leadership is critical to the success of any major effort. He has brought the F-35 to the precipice of success, reflected both in decreasing costs and in the opinions of those tasked with employing this jet.

In full production, the fifth generation F-35A is projected to cost $80–85 million a copy. While that is still a hefty price tag, it is markedly less than the dated, four-plus generation Eurofighter Typhoon, the French Rafale M, or the latest version of the F-15K Strike Eagle. It will outperform those jets and every other four-plus-generation fighter in high- or low-threat air-to-surface scenarios, and none of them would fare well against the F-35 in an air-to-air engagement.

The Heritage Foundation recently interviewed thirty-one former F-15C, F-15E, F-16C and A-10 pilots now flying the F-35A. These interviews were conducted personally, with guaranteed anonymity, to assure that each pilot would be extraordinarily candid. Each expressed an unmatched level of confidence in their new fifth-generation platform in its surface attack roles. And even with current developmental restrictions that limit the F-35A’s responsiveness and ability to maneuver, every U.S. fighter pilot interviewed would pick the F-35A over his former jet in a majority of air-to-air (dogfight) engagement scenarios they could face.

Unfortunately, those who bought into and furthered the belief the F-35 is an underperformer have drowned out the fact the jet has overcome the meddling of bureaucrats and is on the cusp of becoming a dominant tool in our arsenal. With that as a backdrop, it’s neither surprising nor entirely unwelcome that President-elect Trump chose to express his interest in the program in such a public way. While the program today is experiencing success, it has only been since senior leaders such as Gates and, subsequently, Bogdan applied sufficient friction that the F-35 was able to turn the corner. Critics of the president-elect’s technique overlook the fact that it was the pressure to perform, not meddling, that ultimately brought the program back on track. There’s a difference.

The Trouble with Meddling

The complexities associated with any major weapons system are enormous, and elected officials who direct programmatic details very often do more harm than good.

In the early 1960s, both the Navy and Air Force were seeking new aircraft when Robert McNamara was appointed secretary of defense. Like Secretary Cheney, he forced the two Services together in the Tactical Fighter Experimental program. Both services made significant compromises regarding requirements and performance standards. In the end, the Navy cancelled its variant due to weight and performance issues. That left the Air Force with an aircraft (the F-111A) that didn’t meet its specifications and the Navy without a replacement aircraft for its fleet.

The F-35A is currently on a path to success, but the verdict is still out on the F-35B and F-35C. As of this writing, there is no reason to believe they won’t stay the course and prove able to dominate their respective domains. However, the delays and cost overruns that meddling caused may well have been avoided, had the separate Air Force, Navy and Marine Corps programs been allowed to run their respective courses. Had that occurred, the essential role of senior leaders would have been just as it is now—empowering trusted individuals with a task, and applying well-measured friction and accountability to make sure they meet or exceed expectations.

Unfortunately the current administration has established an overarching tone and level of acquiescence through lightly brokered deals and agreements. That tone has engendered a mainstream mindset that views any form of friction in a relationship as brinksmanship. Yet, time has shown that a healthy level of friction is critical to the success of any effort or organization, and that is exactly what President-elect Trump began to apply to our civil-military industrial complex with his tweet on the F-35.

Accountability begins at the top, and it should be more than obvious that the “let’s all get along” way of doing business with and within the United States is very rapidly coming to an end. It is both long overdue, and apt to change the state of play with and within the United States for the foreseeable future. And it will make the F-35, and the programs that follow, better.

A 25-year veteran of the U.S. Air Force with over 4,000 hours of fighter and attack time, John Venable is a senior research fellow in The Heritage Foundation’s Center for National Defense, and the author of Breaking the Trust Barrier: How Leaders Close the Gaps for High Performance.