Why Trump Should Reject the Convention On Cluster Munitions 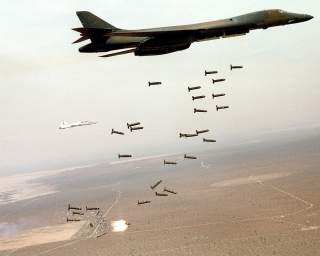 Insanity is commonly defined as doing the same thing over and over again expecting a different result. The label “certifiably crazy” can be applied to the habit of various U.S. Administrations to enter into ill-advised arms control agreements that do little or nothing to enhance American security, but make presidents and their senior advisors feel morally virtuous. The term “bat poop” crazy must be reserved for those instances in which the U.S. government decides to adhere to an arms control agreement which the Senate has not ratified and to which this country’s major adversaries do not adhere. This is simply baring one’s throat to the enemy’s knife.

An example of such really crazy behavior is the decision by the Obama Administration to adhere to the Ottawa Convention on Cluster Munitions (CCM) which entered into force in 2008. A cluster munition is an air-delivered weapon, missile warhead or artillery projectile that contains smaller bomblets or submunitions which are dispersed in the air to expand their area of coverage.  Cluster munitions allow a military force to cover targets spread over a relatively large area (dispersed or mobile ground forces, air defense sites, airfields, logistics centers) while expending a minimum number of bombs, missiles or rockets.

Furthermore, cluster munitions are very cost effective. Submunitions are sophisticated, employing advanced sensors, fuzes and explosive packages to achieve very precise effects. There are anti-armor submunitions that employ millimeter wave radar and infra-red sensors with shaped charges to detect and target armored vehicles while the bomblet is still in the air. Other submunitions are like little hand grenades, designed to attack infantry and light vehicles. Modern submunitions can also include a safety feature to deactivate them after a specific period of time so they don’t pose a threat to friendly forces or civilians.

Cluster munitions are not just an effective weapon of war; they are also a very good deterrent of conflicts. Cluster munitions allow a smaller force to pose a challenge to a larger adversary. A military unit under attack can employ cluster munitions to create a barrier to an enemy’s advance, interdict critical lines of communication and threaten hostile forces concentrating for an attack. Instead of land mines, cluster munitions can be employed with the advantage that they are not emplaced until the conflict has started and the enemy is nearby and generally are much easier to remove. The argument against cluster munitions is that those that do not explode on contact with a target or the ground can lie around posing a threat to civilians. Even when they are designed to become inert after a period of time, some small number can fail to go dud.

The CCM bans the use of cluster munitions as well as their development, production, acquisition, stockpiling or transfer.  The convention does allow the use of certain types of weapons containing submunitions so long as they do not have an area effect or create a danger of unexploded ordinance. Currently, the formal convention has some 107 signatories.

The U.S. is not a signatory to the CCM. The Obama Administration’s public policy position is that cluster munitions are a legitimate weapon of war, can be less destructive than large unitary warheads and that U.S. submunitions have an extremely low failure to dud rate. The U.S. maintains a stockpile of these weapons and has produced additional cluster munitions for export. Although the Obama Administration has verbally supported the retention and use of cluster munitions, it has done almost everything possible to take this very useful weapon of war out of the hands of the U.S. military. It has not produced new cluster munitions while continually removing such weapons from existing stockpiles. Instead, the U.S. military is being required to use only unitary bombs and warheads in current and future conflicts. In the event of a war with a peer competitor, this policy places impossible demands on U.S. forces in terms of the size of stockpiles of bombs and warheads, the number of required launchers and the time required to destroy an area target.

More alarming still, Russia has employed advanced cluster munitions, including thermobaric warheads that employ fuel-air explosives that blast a large area, to destroy Ukrainian ground force formations and other military targets in a matter of minutes. Russian aircraft have used cluster munitions indiscriminately against civilian targets in Syria. Can anyone believe that if they attack NATO or the U.S. that the Russian military won’t use these weapons against us? The idea that by adhering to the CCM the U.S. can encourage other nations to become signatories is demonstrably false. In effect, the Obama Administration has been disarming the U.S. military in the face of its enemies.

When it comes to trade agreements, the newly elected President Donald Trump has been explicit that such arrangements must benefit the U.S. and be based on the principle of maintaining a level playing field. The Obama Administration’s policy with respect to cluster munitions violates these principles. Moreover, this is not a signed and ratified agreement. It is an example of unilateral disarmament and it is crazy. The new president needs to give the U.S. military the tools they need in order to deter conflict. President Trump could help the U.S. military without spending a dime just by announcing he was reversing his predecessor’s misguided policy on cluster munitions.